The Wit and Wisdom of Archie Goodwin.

Illustration of Archie Goodwin by Austin Briggs for the Saturday Evening Post, June 21, 1958﻿
You all know (if you're a regular reader of this blog) what a big fan I am of the Nero Wolfe books by Rex Stout. You know I reread them, at whim, every now and then, in between my reading of other fine and worthy books. You know that lately I am fixated on finishing up the short stories which, truth to tell, I haven't reread in years - having concentrated more on my favorite full length Wolfe novels. But you might not know (unless you've read them) that the Wolfe short stories are every bit as good as the full length novels. In fact, I hadn't remembered them as being quite this good. Is there nothing that Rex Stout couldn't do right? Apparently not. (Is that a triple negative?)

Anyway, today I'm sharing some wit and wisdom from the clever 'pen' of Archie Goodwin, Nero Wolfe's right hand man. Bits and pieces culled from several short story collections which I've been indulging in over the past few weeks. Just things plucked from Archie's entertaining narration as he goes about his day to day duties working for that mighty sloth of a genius, Nero Wolfe. Things that made me smile or shake my head or just laugh outright. The oh-so-cynical Archie has a wry way with words.

"This is interesting," Wolfe said coldly. "What to you expect to accomplish with this fantastic folderol?"...

"...You must see that it's no use. If I tell them, even if they don't like to believe me, they will investigate..."

He shut his eyes, tightened his lips and leaned back in his chair. I kept mine open, on her. She weighed about a hundred and two. I could carry her under one arm with my other hand clamped on her mouth. Putting her in the spare room upstairs wouldn't do, since she could open a window and scream, but there was a cubbyhole in the basement, next to Fritz's room, with an old couch in it. Or, as an alternative I could get a gun from my desk drawer and shoot her. Probably no one knew she had come here.


****************************
Excerpts from CURTAINS FOR THREE (1950), a story entitled BULLET FOR ONE in which Wolfe is hired to find the killer of a man riding horseback early in the morning in Central Park. As usual, people show up at the brownstone to be questioned by Wolfe.
It always riled him that anybody in the world didn't know that he never left the house on business, and rarely for anything whatever. "I work only at home..."

If her cheek color had been from a drugstore, with the patches showing because the fear in her heart was using extra blood for internal needs, I would probably been affected more. But at first sight of her I had been reminded of a picture on a calendar hanging on the wall of Sam's Diner on Eleventh Avenue, a picture of round-faced girl with one hand holding a pail and the other hand resting on the flank of a cow she had just milked or was going to milk. It was her to a T, in skin tint, build, and innocence.


******************************
[Frank] Broadyke gestured with a hand. More than his baritone was cultivated; he was cultivated all over. He was somewhat younger than Pohl, and ten times as elegant. His manner gave the impression that he was finding it difficult to be himself because (a) he was in the office of a private detective, which was vulgar, (b) he had come there with persons with whom one doesn't ordinarily associate, which was embarrassing, and (c) the subject for discussion was his connection to a murder, which was preposterous.


*******************************
Like millions of my fellow citizens, I had done some sizing up of Victor Talbot from pictures of him in the papers, and within ten seconds after he had joined us in the office I had decided the label I had tied on him could stay. He was the guy who, at a cocktail party or before dinner, grabs the tray of appetizers and passes it around, looking into eyes and making cracks.
Not counting me, he was easily the best looking male in the room.
********************************
Since I had cottoned to Audrey Rooney and would have married her any second if it wasn't that I wouldn't want my wife to be a public figure and there was her picture on the calendar on the wall of Sam's Diner, it was a setback to learn that her parents in Vermont had actually named her Annie, and she had changed it herself. Okay if she didn't care for Annie with Rooney, but good God, why Audrey? Audrey. It showed a lack in her.
********************************﻿
Excerpts from TROUBLE IN TRIPLICATE (1945), a story entitled INSTEAD OF EVIDENCE in which Wolfe is hired to find the killer of a novelties manufacturer.

Among the kinds of men I have a prejudice against are the ones named Eugene. There's no use asking me why, because I admit it's a prejudice. It may be that when I was a in kindergarten out in Ohio a man named Eugene stole candy from me, but if so I have forgotten all about it. For all practical purposes, it is merely one face of my complex character that I do not like men named Eugene.

However, there are times when a principle should take a nap, and that was one of them.


******************************
I ran across this terrific essay on Wolfe over at Thrilling Detective and I've included it here for further edification. It's title alone is intriguing: Nero Wolfe - A Social Commentary on the U.S. by Marcia Kiser. Lots of Wolfe quotes included, more from his point of view and Kiser mentions, along with some of the novels, a couple of the short stories I've been lately reading. Interesting stuff considering how long Rex Stout continued to write the Wolfe stories and how long Wolfe and Archie were ensconced in that brownstone as the city, state, and country changed around them. 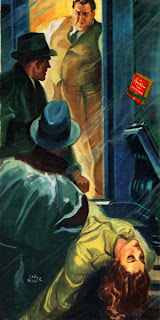 Illustration by Carl Mueller for American Magazine, November, 1948
Posted by Yvette at 3:30 PM