Forgotten or Overlooked Film Tuesday: THE MAJOR AND THE MINOR (1942) starring Ray Milland and Ginger Rogers

Forgotten or Overlooked Films Tuesday is a weekly meme usually hosted by Todd Mason over at his blog, SWEET FREEDOM. Every Tuesday, overlooked films are dished about on various blogs. Check in to see what other films other bloggers are talking about today. Soon as you finish reading mine, that is.

I recently watched THE MAJOR AND THE MINOR thinking I might be disappointed because I hadn't seen it in years and remembered it all too fondly. You know how that goes. Well, anyway, I saw it and loved it once again. There's just something about the youngish Ray Milland that continues to win me over every time. He is just a delightful screen presence. The older I get, the more important he seems to become in my movie memories.

Ginger Rogers is also quite wonderful in this even if she is totally unconvincing in the role of a 12 year old! But her vivacious personality carries the day. It's hard for Ginger to do anything wrong as far as I'm concerned.

In this film, directed by Billy Wilder, Ginger plays Susan Applegate, a young woman trying to make a go of it in NYC, currently working as a hair massage therapist (!?) who visits clients in their apartments or hotel rooms. You can imagine what the staff of these establishments thinks about all this, but she's on the up and up. Susan is tired of her job, tired of the innuendos and double entendres (though this whole movie, in a way, is a double entendre), she's tired of having to fight off men's advances, and, I suppose, just plain tired of massaging scalps.

So, spur of the moment after having coshed an egg on the head of Mr. Osborne, a would-be seducer (played smarmily by Robert Benchley), she decides to quit the Big City and head back home to Ohio. (I think it was Ohio, anyway, somewhere in the Midwest.) Unfortunately once she gets to the train station she finds that the return fair home has changed, it's no longer the amount she'd saved - the only money she appears to have. This woman is really broke.

Susan is the clever sort though, she soon notices that kids ride the trains for half fare. Into the bathroom she goes and after wiping off her make-up, changing out of her heels, hiking up her skirts and adjusting her hat, she emerges as a passable 12 year old.

Once she gets her ticket she boards the train and tries to make herself inconspicuous. But the train personnel are not so easy to fool. Soon she's being chased around the train - these people really take their jobs seriously. Anyway, looking for a place to hide, Susan opens a door and finds herself - you guessed it - in Ray Milland's compartment. Milland is playing Major Kirby and luckily for Susan, Kirby seems to have a bum eye. (Nothing that should keep him from the front lines if he can manage to get his current orders changed - a feat he's been attempting for some time.) Kirby is on his way back to the military school where he teaches.

For some odd reason, Kirby thinks nothing of insisting that Susan spend the night in his compartment - she's made up some story that wouldn't fool a fly, but it seems to fool the Major. Now you and I both know that this film could not be made today - at least, not in the same way. Even if Milland insists on acting all avuncular and playing the part of 'uncle' to little SuSu -  a great suspension of disbelief is called for. But both actors are so charming, that it, more or less, works.

In the morning though, the train is stalled by some trouble or other down the line. In the meantime, Kirby's fiancee Pamela Hill, played in manipulating dragon lady style by Rita Johnson and her father, the General, drive out from the military academy to meet the train. When Pamela impetuously decides to jump on board and surprise her fiancee in his compartment she comes upon Susan Applegate not looking at all like a kid. She's sitting on the lower berth in her pajamas, brushing out her hair.

Screams and screeches ensue. Pamela runs back to her father in the car and they race back to the school to alert the board members of Major Kirby's perfidy. Outraged exclamations ensue. Think of the scandal! Kirby must be mad! He'll be cashiered out of the school, out of the Army!

Kirby soon shows up and very smugly introduces 12 year old SuSu Applegate to the board of directors and all is made well again. Susan has been convinced to stay at the school for a few days, first to get Kirby out of trouble and secondly because the train is still stalled on the tracks. Someone from the school will drive her the rest of the way home in a few days. Awkwardly, Susan is staying with the Hills. Pamela's father runs the school and the family lives on campus. She is then introduced to Pamela's sister, Lucy, an actual teenager (and budding biologist) played by the delightfully cynical Diana Lynn who practically steals the movie. Lucy almost instantly realizes that SuSu is not what she pretends but strikes up a friendship anyway and covers for her, even allowing SuSu access to her stash of hidden cigarettes. Early on, Lucy admits her older sister Pamela is a stinker.

It seems odd to me that with all of Pamela's seeming sophistication she can't spot a fellow grown woman living under her very nose, but let's overlook that. After all, SuSu spends most of her time eluding the amorous young cadets who also appear not to have ever seen a grown woman and take SuSu for the kid she pretends to be. Albeit a pretty dishy kid. Pretty soon it's obvious to Susan that she's taken things a big too far, especially when one of the cadets gets her in a mad clinch. These boys mean business!

In the meantime, there's more oddness going on because Major Kirby is apparently showing signs of jealousy. SuSu's popularity among the cadets doesn't exactly surprise him, but it does annoy him. Kirby still looks at Susan as SuSu and still thinks of her a kid so I can't imagine what he thinks he's feeling if he thinks of it in any rational way at all. It's almost as if he's purposely blinding himself to what is in front of his good eye as they walk around campus - still trying to give her 'fatherly' advice. In one very telling scene, Kirby focuses on SuSu with that 'good' eye and says, "Why, SuSu, you're a knock-out!" Uh-huh.

You'd think the light would go on then, but it doesn't. He's still in the dark.

Susan realizes that Kirby desperately wants to be sent overseas to join in the war effort - this is 1942, after all. But because of Pamela's influential, interfering, chicanery his official requests have been ignored.

Soon, she and Lucy cook up a scheme to set things right. Susan imitates Pamela's voice and calls Washington to speak to the General in charge of orders and things and before you know it, Kirby's request for transfer comes through. (Though I do wonder about the whole 'bum' eye thing.)

Pamela is incensed. She wants Kirby there, right under her thumb where she can manipulate him to her heart's content. 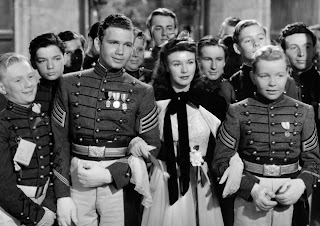 The night of the big dance, who should show up at the school as a chaperon/guest but Mr. Osborne (Robert Benchley), the would-be NYC seducer AND his wife. He recognizes Susan and making conversation with Pamela, spills the truth. Pamela, naturally, seeks revenge.

Later that night, Susan had made plans to meet up with Kirby, returning to her natural womanly self (she gets her hands on a gorgeous gown), she means to 'wow' him. Though what Kirby was thinking to make an assignation with a 12 year old girl is beyond me. Another bit of oddness.

Pamela stops Susan all beautifully decked out, just before she goes downstairs. She tells Susan she's on to her and that she'd better clear out or else. The 'or else' is that Kirby will be bounced out of his job and even out of the Army if the news that he sneaked a woman onto  military school grounds gets out. And Pamela is there to make sure it gets out with the worst  possible interpretation attached. This woman means business.

To tell the truth, I'm feeling a bit uneasy when I get to this part of the story. I don't like it much because the implication all along is that men can be manipulated to such an extent (well, occasionally maybe they can, but still...), it also implies that Major Kirby is a dunce with designs on a 12 year old. Which, let's face it, is an idea that might have crossed our minds at certain points during this movie. But on the whole, I think the story is meant to be some sort of screwball farce or fairy tale. At least, I like to take it in that spirit. But it really does require a HUGE suspension of total disbelief, especially once we get to the ending.

But I think I'll hold back on the ending and leave it for you to discover if you get a chance to see this film one of these days. This is an ending, by the way, that includes a performance by Ginger Roger's mother, Lela Rogers, playing - you guessed it -  Susan Applegate's mother. THEN  Ginger Rogers gets to play her own mother in a rather bizarre scene with Major Kirby who has shown up at the Applegate house carrying some tadpoles sent to SuSu from Lucy Hill.

I can say no more.