Sunday Salon: A Film I Definitely Want To See. 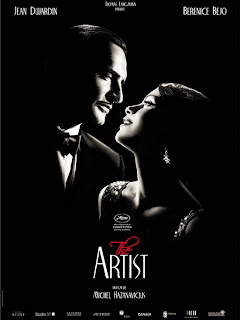 Thanks to Jonas Nordin at his blog, All Talking! All Singing! All Dancing! I've learned about a new film that sounds like something I will definitely want to see. THE ARTIST, a movie by French director Michael Hazanavicius had its premiere at the Cannes Film Festival in May of this year and since I usually don't keep up with the whole panoply of new films unless I'm hit over the head with a great review or an intriguing bit of casting news, I'd never heard of it until today.

THE ARTIST is a surprise, a silent film done in black and white with a synchronized score and sound effects and a short dialogue sequence at the end in the style of the 1920's. It's all about the rise and fall of a 20's silent film star. But what struck me the most when I saw the amazing trailer is the incredibly 1920's/30's 'look' of actor Jean Dujardin. Is it only a Frenchman who can look like this? I admit it, I was dazzled. (Uggy the Jack Russell terrier won me over too.) The film also features American actors, James Cromwell and John Goodman. 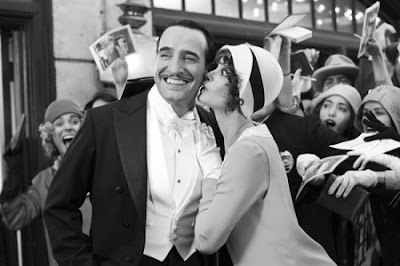 All I can say is, I can't wait to see THE ARTIST. Hopefully it will show up in this country and on Netflix at some point.

Link to the wonderful trailer here.  (There's a short color trailer of a German film to sit through quickly before THE ARTIST trailer begins.)

And read this review by Skukhdev Sandhu in The Telegraph.

Uggy and Jean Dujardin
Posted by Yvette at 1:08 PM