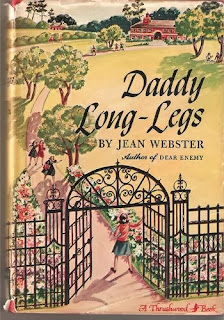 Friday's Forgotten Books is a Weekly Meme hosted by Patti Abbott at her blog PATTINASE Please check in to see what other forgotten books other bloggers are talking about today.

I have to say I do love epistolary novels. It's a difficult way to tell a story so there aren't that many good ones around, but DADDY LONG LEGS, the Jean Webster novel written in 1912, is a classic of the genre. (If this style of writing can be called a genre.)

My Penguin copy has an introduction written by Elaine Showalter:

...one of the truly modern qualities of Webster's writing is its lack of sentimentality and preachiness.  Although her heroine[s] Judy and Sallie are idealistic reformers, they are also irreverent and irrepressible; although they are staunch feminists, they also take great pleasure in kid gloves, new dresses, and male company. The epistolary format of these two novels (Daddy Long Legs and Dear Enemy) allows the liveliness of women's letter-writing to cloak the radical notions of women's limitless strength and capability.

The entire story (except for two expository pages in the very beginning) develops in letters sent from a young woman to her uncommunicative and very mysterious benefactor whom she has dubbed Daddy Long Legs after catching a quick glimpse of him - a tall thin shadow -  from a window.

When Jerusha 'Judy' Abbott is plucked from the orphanage where she's spent her entire life and sent off to college, she is thrust into a new and very unfamiliar world. Her sponsor is a wealthy man who insists that she must write him once a month but she is never to know his real name nor will he acknowledge her letters.

From the first achingly lonely letters to her 'Dear Daddy Long Legs'  - often decorated with her own drawings - we get to know, over the next four years, the interior workings of Jerusha (now called Judy), the vivacious, intelligent, endearingly self-possessed young woman and would-be writer who will steal not only her benefactor's heart but ours as well.

I love this book and re-read it just last night on the fly. It's a quick read, a fun way to spend an evening. Developing a story entirely in letters only from one point of view - since Daddy Long Legs never responds until the very end - can't have been an easy thing to do and yet Jean Webster makes it look effortless. It's as natural as if you'd happened upon a cache of letters and began reading them and got caught up in the story of an awkward girl growing into womanhood right before your very eyes. Amazingly, it's all there in the letters.

Jean Webster's novel was also turned into a stage play as well as the musical film, DADDLY LONG LEGS (1955) starring Fred Astaire (who seems a natural for the part of Daddy Long Legs) and Leslie Caron.