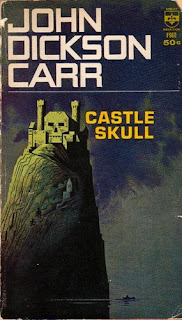 John Dickson Carr (1906 - 1977) was and continues to be the master of the locked room mystery. When you think 'locked room school of mystery', his is the name that automatically pops up. Either as Carter Dickson or John Dickson Carr, he created some of the best murder puzzles ever written. His mysteries are ingenious whodunits with seemingly impossible scenarios, clever casts of often peculiar characters and a wealth of misleading clues meant to confuse the reader and lead him or her totally astray. I'd say he doesn't play fair with the reader, but it really doesn't matter. That's not why you go to Dickson Carr. Or at least not why I've always liked his books.