A Rant: When Is A Book Not A Book? 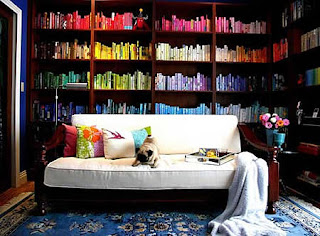 Surely I can't be the only one who finds the whole idea unsettling? Yeah, it makes for a pretty picture. But...

Is a book a book if it's just for looks? What is the point of a book meant solely to pretty up a shelf? The point is obvious, you say, the point is that it tells the viewer that the home owner has 'taste' and money enough to indulge it. I don't understand this, I'll never understand it. I read this piece Selling a Book By Its Cover, from the NY Times with my mouth hanging open. Oh, I know there are homes, large expensive homes in which the library shelves were filled with books bought by the pound at some estate sale. Books never meant to be read, meant merely to fill up space - like props in a stage setting. Books never meant to be touched, merely to be looked at. But I'd hoped this kind of thing was only occasionally to be found in stately homes where no one actually lived. Why that should make the idea more palatable, I don't know.
(Now, I'm not talking about books being used in film and/or theater settings, I know there are businesses that deal in this sort of necessary thing. I'm not even talking, I guess, about the guy who makes pretty trees out of books. I think I view this as recycling.)
But while reading the Times, I felt a surge of nausea at the thought of books being used in this way in a private home. Books wasted, languishing on shelves, all in uniform color covers, merely to satisfy some control-freak idea of decorating. Books as 'texture' - yegads! Books chosen by size and weight, never for content. Books used to make some sort of artsy-fartsy statement. And what's more, there are people making a living supplying this sort of thing to people with too much money and very little taste. People without any elemental sense of the fitness or the rightness of things. People without the heart to value books in any way except as decorations, as God forbid, objet d'arts. See slide show, and try not to be dismayed.
And yes, maybe in a way it IS recycling too, but honestly, the whole idea of this sort of thing makes me cringe. In this kind of atmosphere, books become invisible. They fade into the background, like wallpaper.
What do you think of all this? Am I too sensitive? Is the world coming to an end?
Posted by Yvette at 5:52 PM