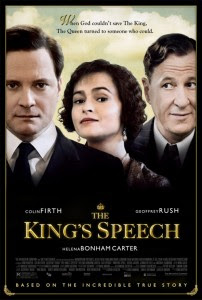 A film I am waiting patiently to see, multiple Golden Globe Winner, THE KING'S SPEECH starring Colin Firth and Geoffrey Rush, two of my favorite actors. In the meantime I read interesting tidbits here and there about the filming and the stars and whatever. Here's an intriguing slide show from Vanity Fair, which gives a nice overview of production designer Eve Stewart's thinking on the sets and costumes.

I've always been a big fan of King George VI. Certainly England was best served by having him on the throne during the war years, rather than the man who became Duke of Windsor.
Posted by Yvette at 9:44 PM