Had he been 'real', Arthur Conan Doyle's immortal fictional detective would have been 157 years old today. (Even if he had been 'real', he would have still been immortal.) You know, if a character can be judged by the affection, admiration and esteem he has been held in over lo, these many years, then Sherlock Holmes, probably to his eternal befuddlement, has to be seen as one of the more beloved of ALL fictional characters. And, at least according to the author of THE VELVETEEN RABBIT's theory, the more a make-believe character is loved, the more he is 'made real'. So, for all intents and purposes, Holmes still lives. (I'm sure being compared to a velveteen rabbit, would have pained him enormously.)

Make no mistake, I fell in love with Holmes when I was a teenager and I've never fallen out. (I was also smitten, early on, by Hercule Poirot and Nero Wolfe. Obviously I'm a big believer in the lure of brain power.) So, for me, Holmes can do no wrong. But mostly I am a purist: it is the Holmes of Victorian gas lit London streets that I love best.
I'm including a link to the fabulous (and worthy of Doyle's original creation) Granada Television series featuring Jeremy Brett's incredible performance as Holmes and David Burke or Edward Hardwicke as his Watson. You can watch all the series of adventures unfold instantly at Netflix. You can also read about Brett and the series in a post from my blog linked here. If you scroll down a bit, on the left side of my blog you will also find a link to various posts on Holmes I've made over the last few months. 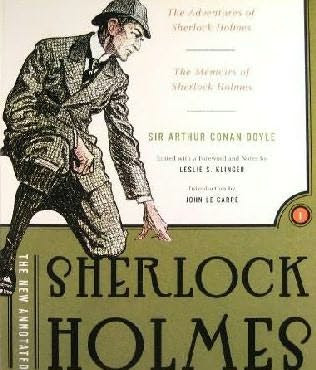 Thanks to The Rap Sheet blog for the heads up on this auspicious birth day.
Posted by Yvette at 1:38 PM