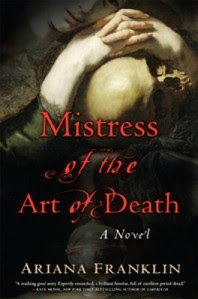 I've just learned the sad news from The Rap Sheet, that one of my favorite authors, Ariana Franklin, passed away on Thursday. This is such a shock. She was a wonderful writer. I love her historical mysteries featuring 12th century coroner and King's investigator, Adelia Aguilar. These are richly defined mysteries with echoes of horror and insidious doings which the brilliant Adelia and her close coterie of friends must usually solve before they, themselves, are betrayed or killed.
The enemies Adelia faces, brought to life so vividly by Franklin, often seem larger than life. The atmospheric trappings of the England of Henry II only enhance the inherent danger for a woman secretly commissioned to do a man's job in a perilous society where women had little value and no chance of being taken seriously as a doctor. Many of the historical details are eye-opening to say the least, though not always in a bad way. It was amazing to me to read just how much medical knowledge Adelia had (she'd been trained in Salerno) that the English didn't.
If you love great mysteries with a medieval setting, then these are the books for you.
I only wish there could have been more of them for us to read.
R.I.P. Diana Norman, aka Ariana Franklin. You will be missed.
There are four books in the Adelia Aguilar series:
Posted by Yvette at 10:55 PM