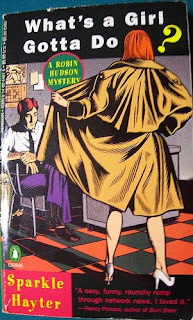 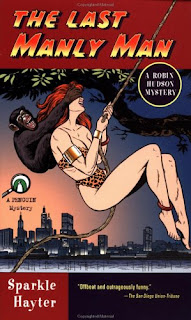 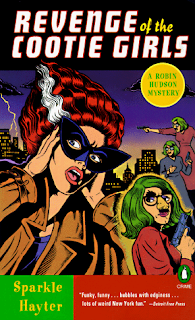 These are some of the catchy covers of one of the funniest mystery series you will ever read. The covers themselves by artist Mark Zingarelli, are so wonderfully done, so in keeping with the ditzy and surreal tone of the books,that I keep my little set of paperbacks in a special place just so I don't lose track of them. (That happens sometimes with paperbacks.) Just looking at the books makes me smile.

The stories feature 37 year old Robin Hudson, a NY based TV reporter who works for the tabloid Special Reports Unit at the All News Network. She has a loathsome boss, Jerry Spurdle (And isn't that the most perfect name for a loathsome boss? All together now: YES!), a NY apartment with insane neighbors, a cat named Louise Bryant, and a positive penchant for getting into trouble of the wierdest and most hilarious sort. I mean, the girl is a lunatic magnet. If it's ridiculous and murderous, it will happen to Robin. That's just her karma.
Thunderbolt out of the blue: While writing this, I've just realized that I don't seem to have read the first in this series, WHAT'S A GIRL GOTTA' DO? Mainly because I don't seem to have it in the house. Hmmm. Well, that's easy enough to rectify. But I know I've read: NICE GIRLS FINISH LAST, THE CHELSEA GIRLS MURDERS, REVENGE OF THE COOTIE GIRLS and THE LAST MANLY MAN. So, when I say that you will laugh out loud and probably fall off the sofa or bed or chair or wherever you happen to be reading, I know whereof I speak. The books are mix of the absurd, the irreverent, the bold and the bawdy. Oh and damn good mysteries too. New York has never been funnier or more maddening.
An excerpt from NICE GIRLS FINISH LAST:
...all my complaints against Aunt Mo are not petty. After my Dad died when I was ten, Aunt Mo tried to get custody of me, citing my mother's mental illness. (My mother believes she's a member of the British royal family, which, even if true, is nothing you want to boast about to the neighbors.)
My mother had forgiven her for the custody fight. I hadn't. Thinking about Aunt Mo, I couldn't sleep for shuddering. It took me fifteen minutes just to will away the image of her that appeared every time I closed my eyes. I was able to relax only after replaying my CD twice and imagining myself in a peaceful place with a handsome man I used to love once, a long time ago.
So there I was, perched on the edge of the gentle abyss, when, suddenly, the low-pitched siren of a car alarm went off on the street below, sending me bolt upright.
...Another went off, emitting intermittent shrieks, then another, and another. I opened my window, stuck my head out and saw a man running through the Con Ed mist, grabbing the handles of car doors and setting off all their alarms, including one that activated a car horn, which in this instance played the first few bars of the Godfather theme over and over. The man ran away. Up and down the dark steamy streets, lights turned on and heads appeared in windows.
The insane symphony of car alarms was soon joined by a chorus of loud cursing that rained down on the heads of embarrassed car owners as they went out and turned off their alarms. After fifteen minutes only one alarm remained, the one with with the intermittent shriek. Another fifteen minutes and someone started shooting at the offending car until the alarm stopped.
Jesus, there were guns everywhere. Well, this answered one of Life's big questions: Is the whole world nuts, or is it just me?
Warning: This is the book that has Aunt Mo's trip to NY and the episode of the sofa, the glue gun and the bad guy. I can say no more.
In my biased view, these books are just as funny if not funnier than Janet Evanovich at her best. So if you like Janet's Stephanie Plum, klutzy Trenton, NJ, bounty hunter books, you will love Sparkle Hayter's books. Plus, if you want another of my biased opinions, Sparkle's books have way better covers.
Posted by Yvette at 11:42 AM