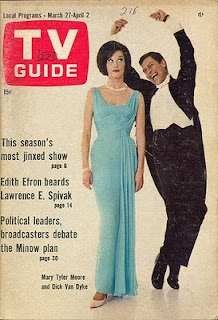 Thanks go to fellow classic movie-TV-devotee Ivan Shreve who is doing hosting duties for The Dick Van Dyke Show Blogathon over at his blog, THRILLING DAYS OF YESTERYEAR.  That's where a bunch of us early television mavens will be dishing Dick Van Dyke all day today. So don't forget to check out what the other Blogathon participants are up to (at the link above).

Ivan (who should know) considers The Dick Van Dyke Show the best television comedy show of all time. His Desert Island pick. So of course, he had to choose the show as the subject for his first ever BLOGATHON, especially since October 3rd is the 50th Anniversary of the show's debut on the air. 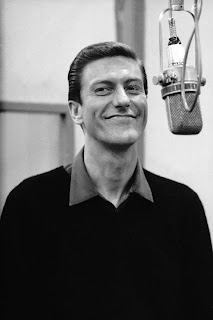 The oh-so-amiable and talented clown, Dick Van Dyke, had such a quirky way of moving. Smooth he was not.  If he were a letter of the alphabet, he would be the letter Z. All angles - the perfect klutz. That odd, long and blocky face fits him perfectly too. And he was always so good at looking befuddled. (Which, as Rob Petrie he spent a lot of time doing.) There never was anyone else quite like him on television. 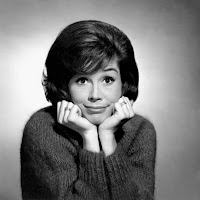 Mary Tyler Moore has such a winning personality. As Rob's wife, Laura Petrie, she was a real casting coup. No matter what happened on the show or how funny she was called on to be, she was always a lady - the likes of which you never see on TV anymore.

Today I'm talking about two Dick Van Dyke episodes in keeping with our excess of zeal: Both episodes are from the last season of the show - Season 5.

So, all together now, let's start humming the theme song. 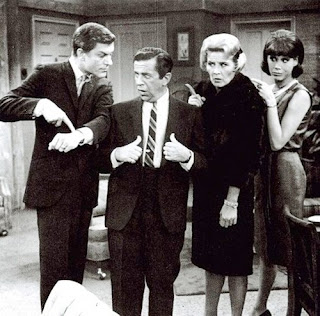 LONG DAY'S JOURNEY INTO DAY (directed by Jerry Paris) is one of my favorite episodes primarily because it features lots of Ann Morgan Guilbert who plays Millie Helper, Laura's ditzy best friend and neighbor. Guilbert always made me laugh and I have a slight suspicion it's because she kind of reminded me of Imogene Coca - they both had the same kind of insipient looniness lurking in their eyes. (In later years, Guilbert was hilarious as the hotsy-totsy grandma on THE NANNY.) 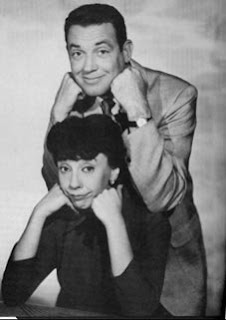 Ann Morgan Guilbert and Jerry Paris
Millie is the wife of Jerry Helper (played by another favorite: Jerry Paris - who also directed these two episodes).  Jerry is a dentist - which in and of itself is funny, though why that should be, I don't know. It just is. They live next door to Rob and Laura Petrie in New Rochelle, New York - a suburban enclave.

In Long Day's Journey Into Day, Rob, Ritchie (Rob and Laura's young son), Jerry and Millie and their kids, are going on an overnight fishing trip. Laura is staying home because she's got a cold.

She reassures Rob who is hesitant to leave her, and bravely claims she's not at all afraid to stay in the house overnight by herself. She tells Rob that she has tons of sewing to do. (Hey, it was the early 60's) She thinks she'll be fine. But of course, we know different.

By the way, at the beginning of this episode Laura is wearing white patent leather go-go boots. They were a HUGE fad in the 6o's. (We all had them.) Just in case you should see this episode and not being from that time (unlike some of us) you wonder why on earth Laura is wearing drum majorette boots in the house. 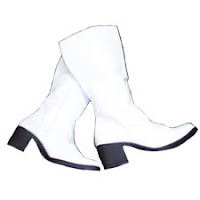 Just before leaving, Millie tells Laura to place a bunch of tin cans in front of the door so if anyone breaks in she'll hear the racket. Millie is the sort of friend who reacts with paranoia at the slightest provocation - that's why I love her. 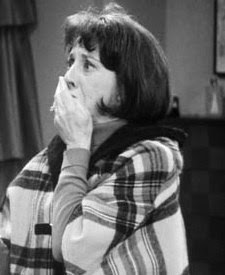 Besides paranoia, Millie has brought over their pet bird, Herschel (some sort of parrot but looks more like a mynah bird) who keeps saying, "Don't be nervous, don't be nervous."  Just what you need to hear when you're pretending you're not nervous.

Millie also gives Laura a parting gift: a thing that looks like a pen but is really an alarm. "If someone breaks in and tries to bash you in the head..." You pull the 'pen' apart and and it makes a big noise.

Millie's just trying to be helpful.

Okay, so after everyone leaves, Laura and Herschel are home alone in a house that suddenly looks and feels remarkably sterile and unfriendly. Laura paces, telling herself there's nothing to worry about. She tries to do some busy work but the house creaks and groans and makes strange night time house noises. (She turns on both the radio and television to keep herself company.)

Mary Tyler Moore is so good at being brave when she's really jumpy, helpless and scared - Millie's paranoia has caught on. 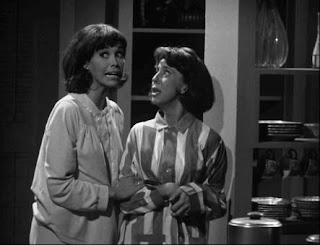 Later that same night, as Laura takes a shower (after placing a bunch of tin cans by the front door), Millie returns - she's caught a train back to keep Laura company. She makes a heck of racket knocking over the cans at the front door (she has a key) but Laura doesn't hear it. When Millie figures out that Laura must be in the bathroom she marches right in and they both share a nice screaming bout of hysteria. 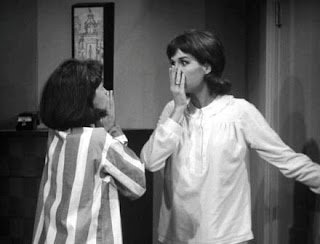 For the rest of the evening Laura and Millie react to every noise and creak as though Jack the Ripper and a gang of burglars were about to break in at any moment. It is very funny stuff. Then later, Rob himself, hit with an allergy attack at the fishing cabin, decides he'd better drive home before morning.

Well, you have to see the show but I think you can figure out what happens next. 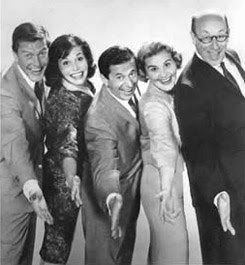 A DAY IN THE LIFE OF ALAN BRADY (directed by Jerry Paris) is my second episode and it features the whole show's staff - Rob Petrie is the head comedy writer for the Alan Brady Show which stars the egomaniacal Alan Brady (played by the one and only Carl Reiner - the creator of The Dick Van Dyke Show). Rob's writing partners down at the television studio are Buddy Sorrell (Morey Amsterdam) and Sally Rogers (Rose-Marie). Richard Deacon plays the perpetually pompous Mel Cooley, the show's all around manager (for want of a better title).

This particular episode takes place on a day when a documentary film crew is following Alan Brady around filming a typical day in the egocentric star's life. 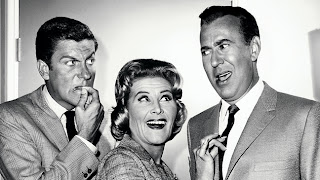 Alan decides he want to film at Rob and Laura's typical suburban house so he can show America how the 'little people' love him. The fact that Rob and Laura are throwing Millie and Jerry an anniversary party that same night doesn't faze Alan in the slightest
Millie is flabbergasted that Alan Brady wants to be part of their anniversary celebration - (and that the party will be on television). She loves the idea despite the fact that Alan can never remember who she and Jerry are.

So the evening is set for disaster...uh, I mean, Alan Brady's spontaneous arrival.

Among the guests at the party are a husband and wife whom no one seems to like but they're invited anyway because they give good presents. He drinks, she flirts with anything in pants. They are the infamous Hy (Lou Wills) and Blanche (Joyce Jameson).

Joyce Jameson
When Blanche hangs all over Rob (I'm just crazy about comedy writers.), then Buddy then Alan, events go rapidly down hill.

Rob directs everyone to act naturally when Alan Brady shows up with his documentary crew. No muss. No fuss. But Alan doesn't want natural. He wants everyone to rush to the door and embrace him. He wants tons of love flung in his direction. Okay, let's shoot it again and this time gimme all the love you got. Blanche takes that a bit too literally.

Why doesn't anything ever go according to plan?

Because then it wouldn't be The Dick Van Dyke Show. 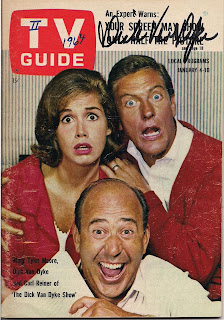