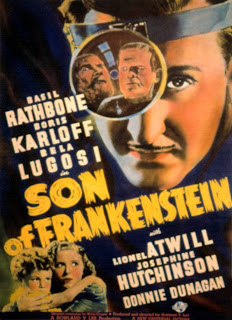 October is the best month of the year to watch ghoulies cavorting on screen. But I restrict my viewing to vintage ghoulies because the more recent stuff is just too ghastly. My imagination is vivid enough, thank you.

I'll be talking about four (possibly more) movies that are perfect for this chilly time of year - one a week. Today it's SON OF FRANKENSTEIN (1939). 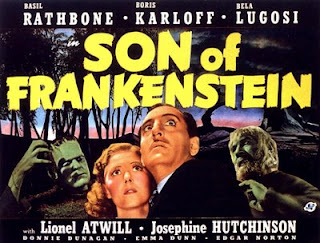 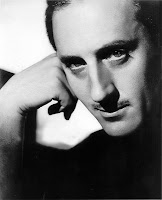 The film is very well directed by Rowland V. Lee and you couldn't ask for more atmospherics than are provided by the art director, Jack Otterson and the Set Decorator, R.A. Gausman. They, I assume, were responsible for one of the oddest, creepiest, strangely angular interior sets I've ever seen. The isolated castle of the Frankensteins is no homey place of welcome. 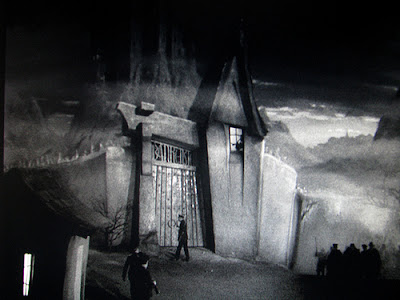 Instead it is moody, dark, unfriendly, filled with shadows and odd angles and the strangest dining room ever. The castle's quirky staircase alone reminds me of something out of Fred Flinstone School of Decorating. Everything is unembellished and stark - you could roast an ox in the fireplace. If you were so inclined.

The fun part is watching everyone trying to make everything seem perfectly 'normal'. 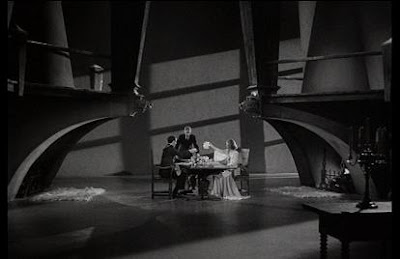 The Baron Wolf von Frankenstein (Basil Rathbone) and his wife Elsa (Josephine Hutchinson) are traveling by train through a barren landscape (out the carriage window it looks like an atomic bomb leveled the scenery - nothing but black, scraggly, leafless trees enveloped in blank gray) on their way to the family castle somewhere, I suppose, in Roumania or maybe the Balkans.

Wolf is trying to cheer up his wife who is, naturally, not taken with the scenery. He tries to put a brave face on everything for her sake. You'll love the castle, dear. Pay no attention to the lifeless scenery.

Once the train pulls into the grim, rainswept station, the von Frankensteins are met by the grim, hostile villagers who are angry and fearful. You can hardly blame them. The Frankenstein monster has a bit of long ago history in that area. In fact, recently there have been several strange murders - all the victims with broken backs. Looks like the work of the monster. But isn't he supposed to be dead? 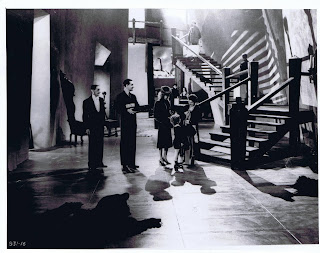 Mom and Pop Frankenstein are welcomed at the castle by some ominous flute music coming from somewhere outside. Inside, their little curly-haired son Peter (Donny Dunagan) awaits. He arrived earlier with the housekeeper and Benson the butler (Edgar Norton) and one assumes, enough staff to get a decaying castle up and running. 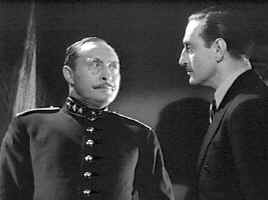 At dinner they are joined by Inspector Krogh (Lionel Atwill), the village policeman who has come to offer his protection should the irate villagers get out of hand. The Baron poo-poos the danger.

Surely the monster is just a myth, an invention of superstitious peasants.

Not so, says the Inspector.The monster is no myth. "One doesn't easily forget, Herr Baron, an arm torn out by the roots." And here the Inspector shows Frankenstein his useless right arm which is made of wood (I assume). A terrific scene as Krogh goes about polishing his monocle with the help of his black gloved wooden hand. This is my favorite Lionel Atwill character. 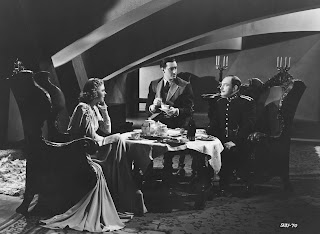 The villagers have long memories.

The next day, while touring the Castle grounds, Frankenstein discovers his father's laboratory which is built over a cave complete with bubbling pit of sulfur or lye or whatnot. The floor of the laboratory has a thick round trap door which when lifted, reveals the dangerous pit and cave below. 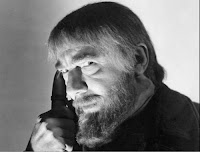 Frankenstein spots a scruffy malevolent hunch-backed creature lurking - he is the wretched Igor, played with zest by Bela Lugosi. (He is the source of the earlier flute music. Who knew Igor was musically inclined?) Wolf threatens the hunchback with a pistol.

Igor reveals he has Wolf's father's monster hidden away. Wolf is taken aback. The monster is sick, Igor explains. (But not too sick to carry out Igor's murderous plans in the village. He has been slowly eliminating the members of the jury who condemned him to hang. Though, obviously the hanging didn't take.)

Igor wants Wolf to cure what ails the monster. He takes the disbelieving Baron down and shows him the monster who is resting - dormant. 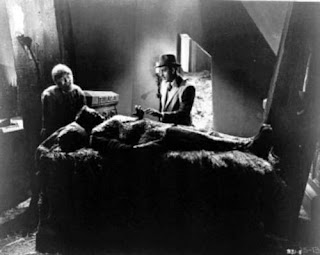 Soon as Wolf realizes that the monster is indeed, breathing, he is smitten with the idea of bringing him back to waking 'life' - he wants to salvage his father's tarnished reputation. How bringing the monster back to mobility will do this isn't revealed. What is it about this monster that makes supposedly rational men of science instantly lose their senses? 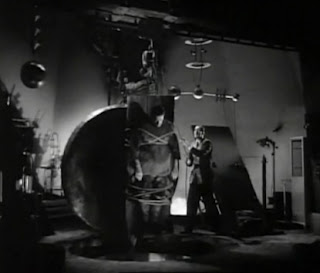 Up from the basement.

So, while Frankenstein works on the monster, he doesn't tell anyone except Benson the butler whose help he needs in the lab (to Igor's dismay). This is supposed to be a SECRET! 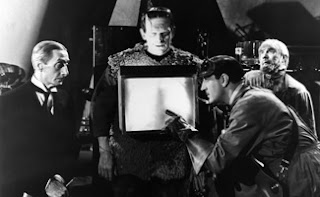 I think I see my father's initials. 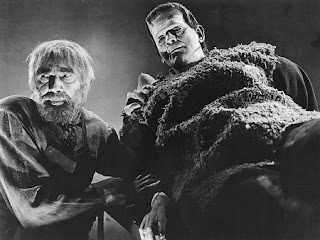 Not to worry, Igor will protect you.

When the monster become mobile again (soon after, Benson the butler mysteriously disappears) he is controlled by his buddy Igor. 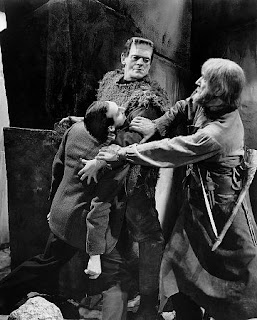 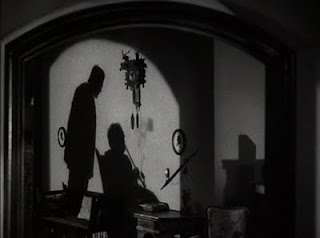 The murders in the village resume. 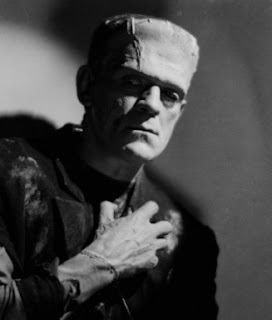 Back-breaking is back breaking work.

Inspector Krogh pays a call on the Frankenstein homestead - he suspects that, somehow, the monster is on the rampage again. He also suspects the Baron knows all about it. 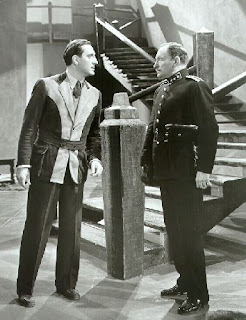 Wolf, I sense that you're a bit nervous.

Poor fretting Elsa Von Frankenstein is completely in the dark. But she has noticed that Wolf seems  on edge. 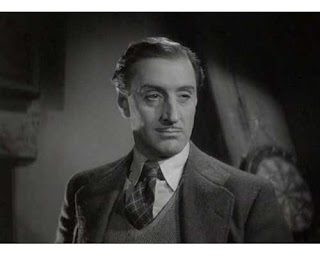 Nerves? I have no nerves. I spit on nerves.

On edge? He is borderline hysterical as he storms about the castle pretending everything is fine. With every attempt to dissemble, he only makes himself more ridiculous.

Rathbone is so wired in these scenes that you expect him to explode in ten different directions at once. There's just something about a hysterical man that is very off-putting. But since it's Basil, I put up with it. 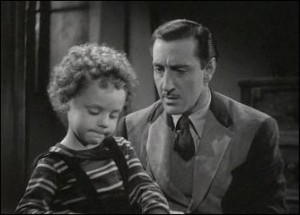 You saw who in your room?

When Wolf learns from his son Peter - who, by the way, has a Southern accent which is never explained - that late at night a big man has been entering his room through the wall, Wolf becomes  unhinged. Well, wouldn't you? Though Peter is remarkably calm about the whole thing.

Eventually, there's a violent confrontation with Igor and during the tussle Igor is shot dead. When the monster finds Igor's body he is heartbroken. Karloff is so good at expressing the monster's anguish. 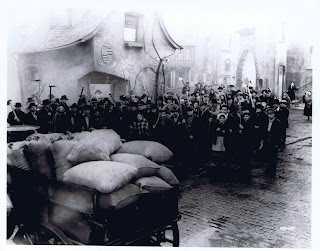 The irate villagers have finally had enough after the umpteenth murder in their little town.

That night the monster goes up to Peter's room and takes him out to the laboratory. The first we hear of it is the housekeeper's screech when she discovers Peter's room empty. Soon Elsa joins in the screaming and screeching. Wolf and Inspector Krogh who happens to be on scene, run to the lab to save Peter. 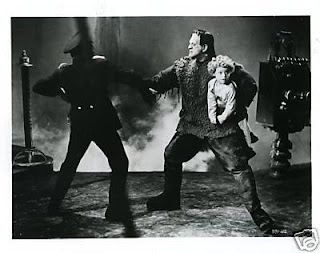 Krogh puts up a good fight but the monster prevails. 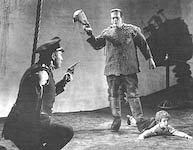 That's Krogh's arm the monster is holding. The prosthetic arm, that is.

When the monster drops Peter, Wolf springs into action. He swings across the room from a rope and knocks the monster into the bubbling pit below. 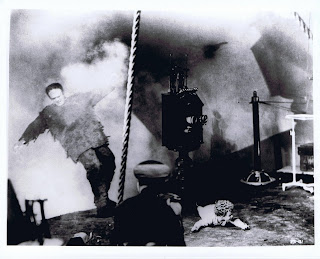 Nobody messes with Frankenstein's kid.

So, in the end, all's well that ends well. (I know, I know, I use that expression a lot, but it's a good one.) The Von Frankensteins leave the castle in the hands of the villagers and head back to saner parts of Europe.

The monster is left bubbling in the pit ready ready to be dragged out for his next adventure where he will not be played by Boris Karloff. 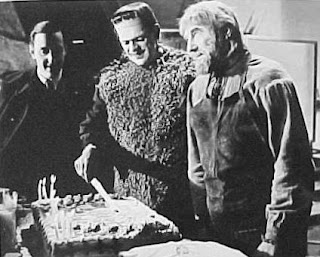 Celebrating a birthday on the set.
Posted by Yvette at 1:57 PM