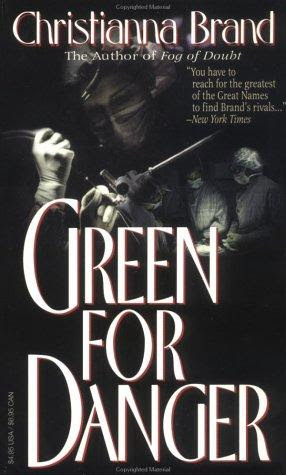 Friday's Forgotten Books is the weekly meme hosted by Patti Abbott at her blog, PATTINASE. Don't forget to drop in and take a look at the list of participating bloggers who'll be posting about Forgotten Books today.

I know several other bloggers have mentioned this book here there and everywhere, but I thought I'd add my own two cents as well.

I wish I hadn't seen the film first because it kind of spoils the ending for the book which is my second Christianna Brand read. But I'm glad I read the book anyway. As I always say: better late than never.

While my favorite Brand book so far is still TOUR DE FORCE, I do recommend GREEN FOR DANGER. The film too, while I'm at it. I'd say, read the book first if you haven't seen the film.

I wrote about the movie here, if you'd like to take a look.

Brand's crusty and curmudgeonly sleuth, Inspector Cockrill, is called to investigate the death of postman who had died while on the operating table during a fairly routine procedure. The setting is a military English field hospital during WWII. The suspects: the operating team's nurses and doctors.

The personal intrigues of these various personalities - all working under pressure - take center stage as suspicion begins to rear its ugly head. Especially when a bizarre second murder occurs. This time it's one of the nurses who is killed. Earlier that night, she'd indulged in a fit of jealousy and outrage, bragging to everyone who'd listen that she knew who killed the postman and had the proof. Of course, you and I both know that in a mystery, this is a BIG no-no. It practically guarantees the character is done for.

At the center of an overdose of female lust is Dr. Gervase Eden, the sort of man who, despite not being especially handsome, attracts women like bees to honey. The nurse that was killed, Sister Bates, was head over heels for Eden, but he'd spurned her after a brief affair. His roving eye had now settled on the beautiful Frederica Linley VAD, who, despite being engaged to young and earnest Dr. Barnes, is not impervious to Eden's bad boy 'charms'.

While Inspector Cockrill soon claims to know who the killer is (very annoying) he has no proof so must keep pestering the hospital staff even after two more attacks occur.

A hospital during war time is an excellent and very atmospheric setting and Christianna Brand obviously did her research. She brings the dark, claustrophobic atmosphere and the different medical personalities to vivid life.

The ending is a double stunner. If you haven't seen the film, you will not see it coming.

I am so pleased to have discovered Christianna Brand's books and can't wait to read my next one. Can't imagine how I ever missed her work the first time around.
Posted by Yvette at 9:30 AM