This is my entry today in Tuesday's Overlooked (or Forgotten) Films, a weekly meme hosted by Todd Mason at his blog, SWEET FREEDOM. Don't forget to check out the list of other participating bloggers at Todd's website.

Both of these films are based on early Agatha Christie books and both were adapted years before some mis-guided masterminds began changing all of Christie's plots to suit who know what agenda. So they are both faithful to Christies books. A very refreshing thing.

A second thing both movies have in common is that the inside scenes were filmed on video and the outside scenes on film. Is that possible? Well, that's what it looks like. So I'm assuming both of these were for meant for television and not the big screen.

A third thing these films have in common is that they both star James Warwick. In one he plays the good guy and in the other he plays the bad.

A fourth thing these two movies have in common is that they both feature the inimitable John Gielgud. I am mad about Gielgud.

A fifth thing both these stories have in common is that both feature 'dying words'.

A sixth thing both stories have in common is that neither of them feature Hercule Poirot or Miss Marple.

Both films are currently available on Netflix streaming, so they're easy enough to find. You might also be able to watch them on youtube. 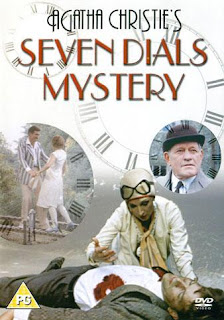 SEVEN DIALS MYSTERY (1981) directed by Tony Wharmby, starring Sir John Gielgud, Cheryl Campbell, James Warwick, Harry Andrews and Lucy Gutteridge is an absolute delight from start to finish. It's all about a preposterous, secret organization known as The Seven Dials.
Whether they are heroes or villains we won't find out until the end, but in the meantime the death of two of Lady Eileen 'Bundle' Brent's friends - both young men murdered most foully - brings her in contact with this most mysterious of organizations. 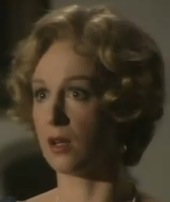 Cheryl Campbell
Bundle Brent is played by the ultra wonderful Cheryl Campbell. She is the epitome of the charming if slightly ditzy, devil-may-care British aristocrat. She is not above involving herself in a whodunit when a friend of hers is found dead at the family estate much to the chagrin of her father, the Marquise who'd rented the house out to Sir Oswald (Leslie Sands) and Lady Coote (Joyce Redman). The Marquise very much resents the idea of a stranger dying in his home.

Bundle's father, the Marquise of Caterham (John Gielgud) is the epitome of the elderly, fun loving, slightly dotty aristocrat. A part tailor maid for Gielgud who has tremendous fun with it. I especially love seeing him in his plaid country woolens and plus fours.

When a second friend of Bundle's is shot (but not before Bundle almost hits him with her car) and his dying words mention The Seven Dials, there's no stopping her from becoming involved in the hunt for a master criminal. In this hunt she has the aid of Jimmy Thesiger (James Warwick), Bill Eversleigh (Christopher Scoular) and Lorraine Wade (Lucy Gutteridge). These fashionable young things (as they were known back then) run about looking for clues, getting into trouble and playing amateur detective to the hilt, much to the chagrin of Superintendent Battle (Harry Andrews) who tries to keep things from getting out of hand.

But out of hand they get when Bundle hides herself in a closet inside a club so she can overhear - and see through a peephole - the goings on at a meeting of the Seven Dials. The seven members wear black hoods with gold clock faces on them - they themselves do not know (except for Number 7) the identities of the others. (I said it was preposterous.) I believe this story was written by Christie when so-called secret organizations were all the rage.

Rula Lenska - remember her? - has a bit part as a myterious Countess. She is really quite good.

English country houses, butlers, the upper classes, great clothes, great cars, bits of stylishly hambone overacting and murder - a great deal of fun is had by all. 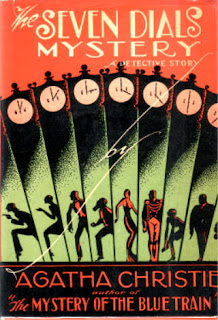 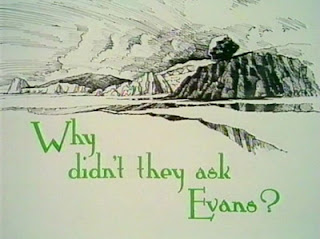 WHY DIDN'T THEY ASK EVANS? (1980) directed by John Davies and Tony Wharmby, starring James Warwick, Sir John Gielgud and Francesca Annis is another absolute delight - don't know what else to call these two films BUT Absolute, Sparkling Delights. This is my favorite era for mysteries and with these brilliant casts of actors, you can't go wrong.

This time out, the action takes place in Wales as well as the English countryside. John Gielgud plays  Reverend Jones, a persnickety country vicar, who despairs that his son Bobby (not the golfer) played by James Warwick, will never amount to anything.

While out playing bad golf with a friend, Dr. Thomas (Bernard Miles), one day on the local cliffs, Bobby hears a cry and almost immediately discovers the body of a man who has fallen off the cliffs onto the rocks below. When Bobby and the doctor run down to see if they can be of any help, it's too late. The man is only minutes away from death - his back is broken.

The doctor dashes off to town to fetch the necessaries and Bobby stays behind not liking to leave the poor man lying alone, dashed on the rocks.

Suddenly the man groans, briefly opens his eyes and says, "Why didn't they ask Evans?" Then he dies.

Seconds later, another man overlooks the cliffs and asks if he can help - should he come down? Bobby says it's too late, the man's dead. But the other scampers down the path anyway. He identifies himself as Roger Bassington-ffrench (Leigh Lawson), just down from town looking for a house to rent.

Bobby hates to ask him a favor, but does anyway. He has to rush off (to play the organ for his father at afternoon services) and would Bassington-ffrench mind staying with the body until the doctor returns. Roger says that of course, he wouldn't mind and Bobby rushes off, arriving late, clanking into church in his golf shoes, but swiftly settling himself at the organ.

The expressions on the vicar's face (John Gielgud) as his son Bobby clumps to the organ are so hilarious to watch. This scene alone is worth the price of admission.

And so begins the adventure of a lifetime for the hapless Bobby, whom enemies will soon try to get out of the way with 8 grams of morphine.

But I'm getting ahead of myself as usual.

The next day, while Bobby is traveling to London by train to take up with another of his friend Badger Beadon's (Robert Longden) failing enterprises - this time revamping gunky second hand cars - he trips (literally) over another friend, Lady Frances Derwent (Francesca Annis) - known as Frankie -when he falls into her first class carriage. 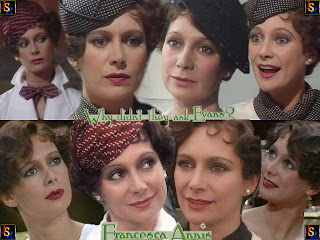 Francesca Annis as Frankie Derwent.
While they're reacquainting themselves, she asks about the dead man who toppled off the cliff. She's been reading about it in the papers. Once Bobby tells her that he was in '...at the death, so to speak." She wants to know all the details. The paper failed to mention Bobby's name.

Later, at the inquest, all sorts of questions go unanswered and a verdict of 'death by misadventure' is brought in. Frankie suspects foul play.

Especially when the dead man's sister, who has shown up to identify the body, seems all wrong. (The English class system in play.) Bobby realizes that she simply cannot be the sister whose photo he originally saw in the dead man's shirt pocket.

Most especially when shortly thereafter Bobby is almost done to death by morphine.

Frankie thinks Roger Bassington-ffrench could bear some looking into. But Bobby's not so sure. He's the hesitant type. Frankie is the full speed ahead type.

Not one to let the grass grow under her feet, Frankie has arranged to have an 'accident' right in front of the gates of the large house in the country where Bassington-ffrench (gotta' love that name!) is currently staying. The house belongs to his brother Henry (James Cossins), a troubled man who lives there with his wife and young son.

Frankie explains that since she has a title - "Very useful things, titles," she will likely be asked to stay while she 'recovers' from her car crash. (She's brought a doctor friend along to insist she can't be moved. She's thought of everything.) And while she's a 'guest' at the house, she can sleuth. 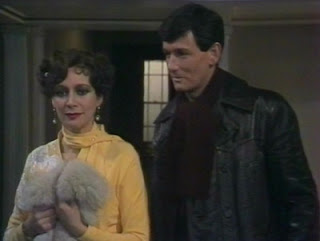 Francesca Annis and James Warwick.
Later, Bobby shows up masquerading as her chauffeur. "No one ever looks at chauffeurs."

Well, long story short: It just so happens that right next door to the Bassington-ffrench house is a sanatorium for drug addicts, run by the very mysterious Doctor Nicholson (Eric Porter) who wears the creepiest round, thick eyeglasses and whose beautiful young wife goes about in fear of her life. Just the usual.

No one named Evans, though.

Little by little, as the mystery unfolds and another particularly beastly murder occurs, it becomes obvious that the death of the man on the cliff was put into motion long ago but is connected to more recent events under investigation by Bobby and Frankie. Events which propel the two amateurs on a dangerous journey which, unexpectedly, leads them back home.

I defy anyone to know who Evans is and how very wise of Agatha Christie to make the character, under our very noses early on, truly the least likely. 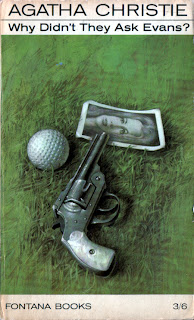