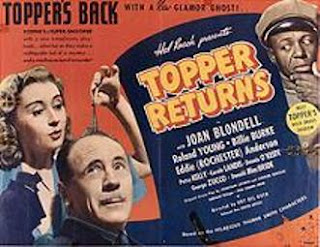 If it's Tuesday, you know it's Overlooked Film Day, a weekly meme hosted by Todd Mason over at his blog, SWEET FREEDOM. Don't forget to check in later and see what other overlooked films other bloggers are posting about today.

I purposely picked this entry in the Topper series (TOPPER and TOPPER TAKES A TRIP), because, if I'm remembering correctly, it's the only one with a mysterious shadowy killer lurking in the dark - perfect for Halloween viewing. If you want to laugh, that is. I love a good mystery with laughs myself.

Directed by Roy Del Ruth, TOPPER RETURNS is a nonsensical hoot of a movie with very little logic but plenty of screwball action.

No Cary Grant in this one, but the shadowy killer draped in black from head to toe makes up for it (creeping about in a honeycomb of secret passageways on an old estate). 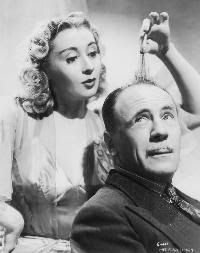 Joan Blondell and Roland Young.
Roland Young is back as Cosmo Topper, the perpetually befuddled banker with the gleam of something or other lurking in his eyes. There was always a hint of smarminess in Roland Young, perfect for the part of the hapless Topper who is always getting involved with beautiful ghosts. 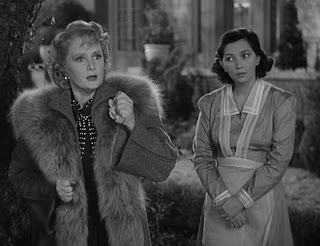 Billie Burke and Patsy Kelly.
Billie Burke is back as well, as Topper's lovable but ditzy wife. In this movie, she comes close to being incoherent, indifferent to anything but the idea that Topper might be casting his roving eye on Joan Blondell whom she first sees in Topper's snazzy convertible, sitting on his lap. Of course, there's a perfectly logical explanation (sort of) to this, but Topper never really explains anything and even if he did, Mrs. Topper is too fixated to believe him.

Billie Burke made a speciality of these types of roles probably because she was wonderful in them. 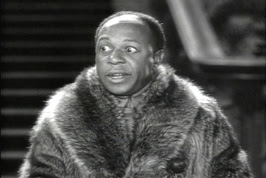 Eddie (Rochester) Anderson
Eddie (Rochester) Anderson stars as Topper's beleaguered chauffeur Edwin or Edward - anyway - he's known as Eddie. Now we all know Anderson had his own particular comedy schtick which he did for years on The Jack Benny Program, and he continues it here as Topper's much put-upon chauffeur. (There's even a Jack Benny joke/reference near the end.)

Wearing a raccoon coat for most of the movie, Anderson has several truly funny moments which, even after seeing the film more than once, always make me laugh out loud. The odd thing is, I never found Mantan Moreland (who had a similar schtick) very funny except when he played with the East Side Kids (Feet don't fail me now!), NEVER when he played later in the Charlie Chan movies. He was just an encumbrance then.

And Stepin Fetchit makes me cringe. He ruins CHARLIE CHAN IN EGYPT for me. One of the more dreadful stereotypes in films, unfortunately.

But Eddie Anderson, despite his being the chauffeur - the usual part for black actors in those days was as a servant of some kind - has such a gleam of skepticism in his eyes, as if he can't believe white people can be so ridiculous - that he rises above stereotype. He is delightful even when he's being afraid of ghosts. You're not laughing at him, you're laughing with him. 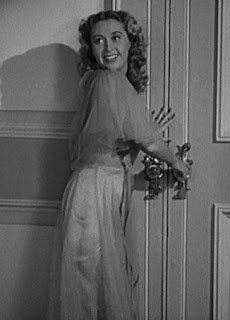 Joan Blondell is terrific and perfectly cast as the smart-alecky best friend to heiress Carol Landis. Joan plays Gail Richards, a girl along for the ride as she accompanies her best friend Ann Carrington (Landis) back home from Singapore (I think) where they've both been doing who knows what.

Blondell is made to order for slapstick, wise-cracks and double-entendres, all of which abound in TOPPER RETURNS.

Carol Landis
Ann Carrington is going home to meet her father for the first time since she was a baby AND to inherit - the day after when she turns 21 - a huge fortune left to her by her late mother. Uh-oh.

Carole Landis is given nothing much to do in the movie but look beautiful, scream a lot and faint. That's the extent of the role. Joan Blondell has all the fun.

Dennis O'Keefe shows up as a cab driver who later becomes Ann Carrington's love interest, but he doesn't have very much to do either. It's not their movie.

George Zucco is in this movie too, as Carrington's doctor, but he hasn't much to do either EXCEPT look sinister and flash his mesmerizing eyes about. Zucco could always add a ghoulishly intense presence to any scene he was in. So, in effect, he's in there as scenery.

The usually funny Patsy Kelly plays Emily, Mrs. Carrington's worried maid, but really, she's not given much dialogue or much to do either.

Lots of wasted talent in this film, but what's left, thankfully, is funny enough.

*****************************
Here's the plot:
Ann Carrington arrives from abroad to claim her inheritance and meet her father, Henry Carrington (H.B. Warner) who, really, looks old enough to be her grandfather. They aged differently back then. Topper (Roland Young) is supposed to be 46 yet he looks to be in his fifties. 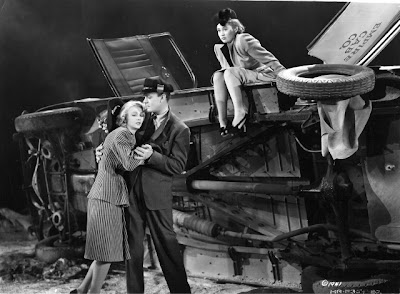 Carole Landis, Dennis O'Keefe and Joan Blondell.
From the getgo someone is out to get her. Evidence: a sinister shadowy figure shoots out the tire of their cab while the girls are traveling to the Carrington estate. The cab is almost plunged off a cliff, but not quite.

We know from the first that Gail and Ann are in danger. And oh by the way, the opening credits are too, too MUCH! They feature the shadow of a caped figure skulking about - just perfect. It puts you in the mood immediately.

When Ann and Gail finally arrive, having been picked up on the road by Topper and Eddie on their drive home (they live next door to the Carrington estate),  they are met at the palatial but forbidding house by a butler and the requisite sinister housekeeper (sorry to keep using that word, 'sinister' but can't think of a better one). In one scene, Joan Blondell calls the housekeeper 'Rebecca'.  Get it?

When almost immediately another attempt is made on Ann's life (an enormous chandelier crashes down on her ala Phantom of the Opera), one can guess that something is afoot.

Later that night Gail and Ann exchange rooms because Gail's has Chinese wallpaper and furniture and she claims to have had enough of that where they came from - plus she love Ann's room and Ann, milquetoast that she is, doesn't seem to care one way or the other. So Ann sleeps in Gail's room and Gail sleeps in Ann's fluffy, ruffled organza. girly-girl suite overlooking the ocean.

In the middle of the night, in that dark, dark room, a secret passageway opens (behind Ann's dressing table) and a shadowy black figure enters. He kills Gail when she gets out of bed to close the window.

Gail's incorporeal ghostly self rises from the dead body of corporal Gail and for, whatever reason, decides to head for Topper's house to ask for his help. She takes the short route through the window. 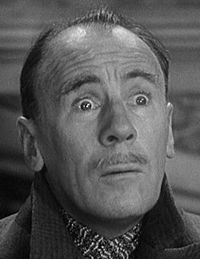 Once there, she surprises Topper, who hasn't heard the last of it from Mrs. Topper (she spotted Gail sitting on his lap when his car whizzed by the house on the way to Carrington's), who is unaware that a ghostly presence is lurking in her husband's bedroom. Gail wants a very reluctant Topper to go next door and investigate what happened to her. A bit of blackmail is called for and soon, Gail has Topper under her ectoplastic thumb. 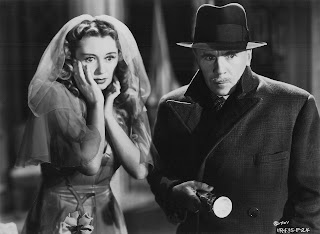 So, in the middle of the night, Topper and Eddie and the ghost of Gail head on back to the Carrington estate to see who did what to whom.

What follows is screwball with a Capital S once everyone who lives in the house is awakened and Topper tells them that Gail has been murdered. 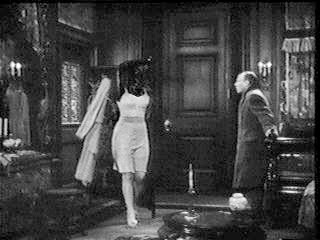 Unfortunately by then, the body's disappeared and no one believes Topper and by the way what on earth is he doing in their house at this time of night?

In the meantime, Eddie, frightened by Gail's ghostly footsteps in the snow (?!), has hightailed it back to Topper's house. Though there's no snow anywhere else in the entire movie. 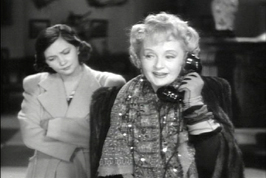 Once there, Mrs. Topper discovers Topper missing and decides she wants to head on over to the Carrington estate with her maid, Emily, in tow. Eddie must drive them back - reluctantly.

When Mrs. T shows up at the Carrington estate, there's a virtual mob stumbling around the house, especially once the cab driver, Bob (Dennis O'Keefe) shows up wanting to be paid for his earlier trip but stays, instead, to help the heiress in a jam.

Donald MacBride
The cops show up. Well, two patrolmen and a detective, Sgt. Roberts (Donald MacBride - an actor born to play cops) who are just as ditzy as Mrs. T. They immediately fasten on Topper as the culprit.

Then everyone gets locked in a freezer, including the cops.

With all these people storming around, the shadowy figure still has his moments of lurking about in the secret passageways riddling the house. Eventually he sneaks in and grabs Ann. 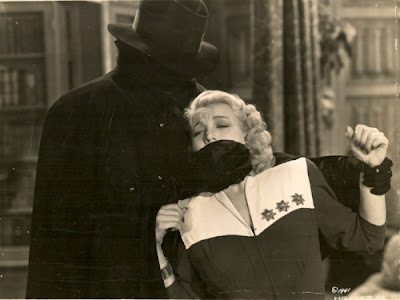 He drags her down to the caves beneath the house. There's even a secret boat dock, complete with boats, gates and henchmen. Very convenient. 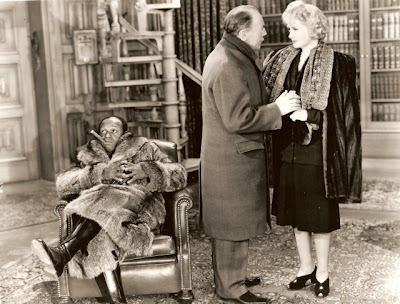 Upstairs, there's also a chair rigged to collapse backwards when someone sits in it. It sends the occupant tumbling far below into the water. It's the quick way to get to the boat dock,

A totally fun house to live in.

When the killer is revealed there's a bit of a surprise if you're so inclined. But by the end you won't care. The whole thing is a carnival ride of a move - including car chases and encounters (by Eddie the chauffeur) with a fun-loving seal in an underground cave. The usual. 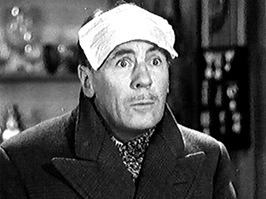 View the trailer, here. The movie is available for streaming on Netflix and you can watch the first half of the movie at youtube if you're so inclined. Or, it looks as if you can watch the whole movie over at Internet Movie Database. Link.