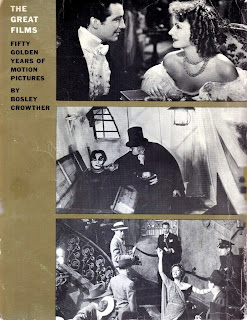 If it's Friday, if's FORGOTTEN BOOK DAY. Don't forget to check in at Patti Abbott blog, PATTINASE, to see what other forgotten books other bloggers are talking about today.

Bosley Crowther
He was summarily replaced at the Times with younger and supposedly more visionary critics, (certainly more in tune with the public's shifting taste in films - this was the late sixties).

Crowther wrote several books on films and criticism and a biography of Cecil B. DeMille, HOLLYWOOD RAJAH. (A great title, I've always thought.)

I received THE GREAT FILMS Fifty Years Of Motion Pictures (1967) as a birthday gift in 1969. Over the years I've continued to enjoy looking through the book and reading a paragraph and there. Never the whole thing at one gulp. 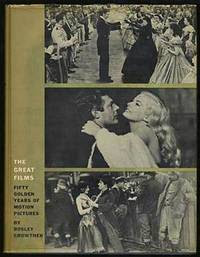 This is the copy I have.
It's so interesting to compare the films listed here with current lists of Great Films. I'm not sure that Crowther's complete list would survive in tact.

As a critic, Bosley Crowther could be snooty, no doubt, and often cruel. But I think that was the style of the day. He was given power and he used it. I've read very few critics who aren't snippy and ready to ridicule. Perhaps only Roger Ebert springs to mind. Though when he dislikes a film, he makes sure you know it. In general though, he doesn't condescend nor is he deliberately cruel.

While there are films listed here which I haven't seen and also films with which Crowther and I do not agree, on the whole, I think we agreed more often than not. We shared a propensity for foreign films though I was not as fond as he of the grim Italian 'reality' films of the day - the disillusion and human wreckage of WWII still alive in movie-makers' memories.

I also don't think that a current list would include as many silents as on Crowther's list. I admit I am not as fond of silent films as some. It's a fault, I know.

There is also a Supplemental List of 100 Distinguished Films.

Each of the fifty films has several pages (and many b/w photos) devoted to it, written by Crowther in lucid, affectionate, critically precise, slightly old fashioned terms. If you are at all interested in the first fifty years of film, they make for great reading.

To learn more about Bosley Crowther, please use this link.
Posted by Yvette at 9:30 AM