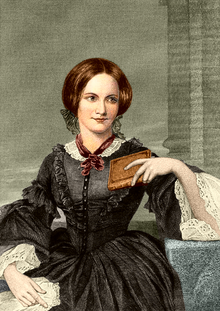 Charlotte Bronte (1816 - 1855), the last of the remaining Bronte brood died 156 years ago today. She was 38 and pregnant at the time. Too young to die. They were all too young. Honestly, when it comes to medicine and its practice, the 19th century appears to have been a veritable Dark Ages of ignorance.
I wonder what Bronte would think of the latest incarnation of her JANE EYRE character? The popularity, really, of all the sisters' work, but especially, JANE EYRE. I wonder if these young women could have ever suspected that their writing, done in the chilly rooms of that dark and gloomy rectory, would still be read, admired and talked about in the year 2011.
Posted by Yvette at 6:12 PM