Killing two birds with one stone, DEATH IN CYPRUS (1956) is also my latest entry in the Vintage Mystery Reading Challenge being hosted by Bev at My Reader's Block. Please check out Bev's blog to see what vintage books other bloggers are writing about as well.
I actually read several books this past week, but I'm prioritizing how or if I want to blog about them. A couple of the books I brought home from the library last week were half-book wonders. In other words, I read half the book (more or less) then stopped. So those I won't talk about. But I will talk about the two Deborah Crombie books A SHARE IN DEATH and ALL SHALL BE WELL which I read back to back and enjoyed very much. This is a new series for me featuring Scotland Yard Superintendent Duncan Kincaid and his associate, Sgt. Gemma James. I have to thank Nan over at Letters From Hill Farm blog for recommending Crombie to me. She was right on the money. I'm a big fan of Martha Grimes and Elizabeth George, two other Americans who write British police thrillers and I'm adding Deborah Crombie to my list of favorites. Can't wait to read the rest in the series which began in the late 80's, so lots of good reading ahead for me.
Okay, back to DEATH IN CYPRUS. M.M. Kaye (1908 - 2004) was a popular writer of both adult and childrens' fiction. She was born in India in 1908 and lived a good long life, travelling a great deal and writing wonderful stories. Her most famous book, I suppose, is THE FAR PAVILLIONS which is a marvelous romantic adventure set in India. In 1984, it was turned into a multi-part TV series starring Ben Cross. The series is superb, but the book is even better. I say: read the book, watch the series. I am a big fan of M.M. Kaye.

Following THE FAR PAVILIONS, she wrote SHADOW OF THE MOON (1957 - revised in 1979)), which I've also read and can recommend highly. After that came TRADE WIND (1963) which I think I read, but I was looking at it just the other day and nothing rang a bell, so it's possible I never read it but thought I had. So I'll be reading it soon and reporting. 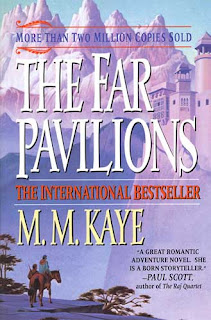 M.M. Kaye also wrote a series of mysteries (usually with some romance added) set in exotic locales. I've read and loved them all. DEATH IN CYPRUS being the only one I hadn't read until this past week. So this one is still alive and fresh in my memory.

Most of M.M. Kaye's suspense books feature a young girl of some independent means who, for one reason, or another finds herself in a colonial locale like Kashmir, Kenya, Zanzibar or, in this case, the gorgeous island of Cyprus. Here she encounters danger and romance. The stories are told with great charm, wit and attention to detail. Kaye is also quite good at what I call, quick characterization: establishing a character with a few deft strokes. I am very fond of this series of books and recommend them to anyone who'd like to arm chair travel a bit to faraway places, face some danger and find romance. Most of the locales Kaye wrote about have changed greatly since the 50's, but I find it fun to go back in time and visit these fairy tale-like places that could not have existed, except that once they did.
In DEATH IN CYPRUS, we meet young and beautiful Amanda Derington, newly travelling on her own for a holiday on Cyprus, glad to be temporarily out from under her guardian-uncle's thumb. On the ship over to the island, one of her ship-mates, a highly strung married woman named Julia Blaine dies in Amanda's stateroom. Amanda is the only witness and naturally, she is horrified. In to lend a hand at just the right moment is artist Steven Howard, a mysterious young man with odd connections. What is at first assumed to be a suicide is soon discovered to be murder by poison. Steven Howard pops up on several occasions and though fractious, the growing relationship between Steve and Amanda is fun to read about. But don't get me wrong, this is an often moody tale with some frightening moments and a couple of harrowing escapes.
Amanda herself comes under some slight suspicion of murder. But all the travellers from the ship are allowed to disembark on Cyprus and go their own sight-seeing ways. Another murder soon follows and an attempt on Amanda herself before the final resolution which is a good one - it seems we'd been mis-directed all along.
I recommend this as well as all the rest of the books in the series:
DEATH IN THE ANDAMANS
DEATH IN BERLIN
DEATH IN KASHMIR
DEATH IN KENYA
DEATH IN ZANZIBAR
Perfect Spring or summertime reading, I'd say.
Posted by Yvette at 12:45 PM