The Crime Fiction Alphabet meme is hosted by Kerrie at her blog MYSTERIES IN PARADISE. Today, St. Patrick's Day is Letter J day. For my Letter J entry I choose author Josephine Tey.

Josephine Tey was the mystery writing pseudonym of Elizabeth MacIntosh, author and playwright. (She wrote plays under the name Gordon Daviot.) Tey was born in Inverness, Scotland and apparently, began writing professionally in 1926. Overall, she was not a prolific writer. But what she left us is 'choice.' She wrote several mysteries featuring her likable Scotland Yard inspector, Alan Grant. In my view, she wrote four classics, two of which transcend the 'mystery genre' classification. But all four are superb. 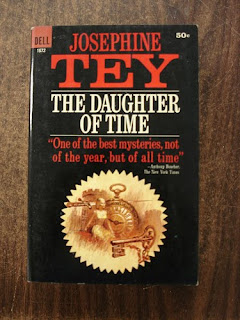 1) THE DAUGHTER OF TIME. (1951) Who really killed the two young princes in the tower? Everyone supposes it was the evil hunchback, Richard Plantagenet, Richard III - well, at least according to Shakespeare and several other historical figures including 'the sainted' Thomas More. Their view: the two boys were cruelly eliminated so that Richard (the boys' uncle) could grab the throne after the death of his brother.


But suppose this assessment is the result of incorrect speculation over the centuries and even, downright vindictiveness? Suppose Richard III was not a villain but a maligned victim of history?


When in 'contemporary' time, Scotland Yard Superintendent Alan Grant is laid up in hospital, he soon grows bored with the pace of the place and the 'invalid' routine. Desperate to find something interesting to do while lying in bed recuperating from a bad fall, he eventually becomes interested in a portrait of Richard III. He then asks a friend to bring him some research material, books, etc. on the much maligned king.

This is a book that takes place while Grant lies in bed and ruminates. So essentially, all the action takes place in his mind. But what a mind it is. And what a writer is Josephine Tey. Somehow she turns this story of historical speculation into a fascinating mystery. A tale of deductive reasoning that is one of the most intriguing books I've ever read.


I knew little about Richard III and the story of the missing brothers. I only knew vaguely what everyone else knows. (At least those that have read a bit of English history in school or elsewhere.) So this book was an eye-opener for me.


For, if Tey is correct, her detective Alan Grant, in the form of surmises and deductions based on some simple research and logic, solves the mystery of the princes in the tower and turns history upside down. A brilliant book that anyone with any sort of interest in history and puzzle-solving and mysteries should definitely read. I think this is her best book. The title, by the way, comes from the old saying: Truth is the daughter of time. 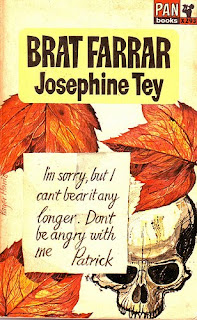 2) BRAT FARRAR. (1950) The best story of 'criminal' impersonation I've ever read. The best story of a 'con' gone right. One of the best mysteries ever, even if you know almost right from the beginning that the hero is not who he claims to be and may, really, be not such a good guy after all.


Simon Ashby will soon turn twenty one and claim his inheritance. Years before, upon his parents' death, his Aunt Bee had come to Latchetts, the horsey and ramshackle country estate belonging to his family, to take care of him, his three sisters and his twin brother Patrick. It has been years since the tragedy of Patrick's disappearance cast a pall over the family. Patrick, a quiet thoughtful boy, has long been presumed to have run off and committed suicide. His body was never found.


Enter Brat Farrar. He is a young man down on his luck who is suddenly given the chance to belong somewhere, a chance to claim part of an inheritance worth a fortune. All he has to do is impersonate the missing and presumed dead, Patrick Ashby. The thing is, you see, that Brat looks exactly like Patrick - close enough to be an Ashby twin. He is the image of Simon, presumably what Patrick would also have looked like grown-up.


What happens next is what some people believe is Tey's finest book. Though I still give the edge to DAUGHTER OF TIME, on some days I might switch the two. Their excellence is so close that there's hardly a glimmer of light between them.


BRAT FARRAR was turned into a superb PBS TV movie in 1986 with a wonderful cast. The story remained almost completely faithful to the book and is a pleasure to watch - if you can find it. 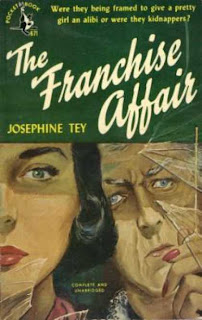 3) THE FRANCHISE AFFAIR (1948) This is basically the story of malicious injustice and the gross power that gossip can have, especially in an 'enclosed' society. A small town English lawyer is called upon to help two women who have been accused of kidnapping and mistreating a young girl. It is based on a real-life 18th century case though Tey sets the book in 'contemporary' times. The 'Franchise' in the title refers to the name of the house in the story. This is the sort of book that makes you uneasy while reading because Tey's expertise is such you're never quite sure if the people you are rooting for are what they claim to be. 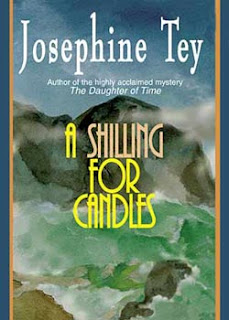 4) A SHILLING FOR CANDLES (1936) One of my favorites though others may quibble. Inspector Alan Grant is called in when the body of Christine Clay, a famous film actress is found on a secluded English beach. The young man she'd picked up and brought down to her beach house with her is instantly suspected when 'suicide' turns into 'murder'. When he goes 'on the lam' and the search is on, Tey introduces a delightful young girl into the story. She is Erica, the 16 year old daughter of the local constable and she could easily be the standard for all the young girl detectives that have followed over the years. Certainly she reminds me most of the precocious Flavia de Luce created by Alan Bradley in his prize winning books beginning with THE SWEETNESS AT THE BOTTOM OF THE PIE. (Though Flavia is younger.) You just can't help but see the resemblance in personality, attitude and intelligence. I loved this character and wish that Tey had brought her back in some other book. (Grant himself is so charmed by the sixteen year old you could easily see him waiting for her to grow up. It would have made a great story.)


Josephine Tey didn't write nearly as much as the rest of the Golden Agers, but what she did write left an indelible impression. She is one of the writers I never tire of re-reading. If you've never read her, be prepared for something a little different, especially in the first three books mentioned above. The fourth book, A SHILLING FOR CANDLES is more the standard mystery, but the inclusion of the wonderfully inventive character of Erica lifts it above the average and makes it one of my personal favorites.
Posted by Yvette at 1:08 PM