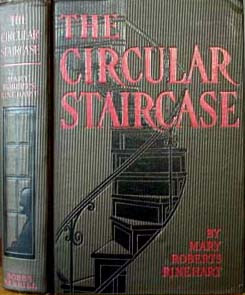 Well, I'm glad to find myself back online. I had computer problems today but, all's well that ends well. My internet provider walked me through some hair-raising mumbo-jumbo and here I am. Now all I need is a martini and all would be perfect. Ha!

I brought home a bunch of Mary Roberts Rinehart books last Tuesday (a secret trip I didn't tell you about - or did I?). Didn't say much because I wasn't sure if I was going to be reviewing one or two of them or not. But I was so taken with THE CIRCULAR STAIRCASE, that I thought I'd write about it today for my Monday Book Review AND also as an entry in the Vintage Mystery Reading Challenge. Link here to read more about the Challenge being hosted by Bev at MY READING BLOCK.


THE CIRCULAR STAIRCASE is Rinehart's first book and all I can say is, wow! - what a terrific debut. It set the stage for the writing of the rest of her stories featuring similar circumstances with similar characters for the rest of her life. But in this case, instead of familiarity breeding contempt, it bred affection. Talent can make the most mundane things appear new and fresh every time. Formulaic, but never dull or uninteresting and always mysterious and bristling with suspense. 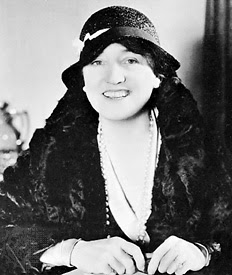 (I also read another of her books, THE WALL (1938), which I enjoyed very much, but won't be reviewing. Though I did post a few words about it yesterday. All I can say is, you won't go wrong picking this one up as well.)


In THE CIRCULAR STAIRCASE, we meet the first of Rinehart's women of a certain class who will become, in time, a staple of her stories over her long writing life.


This is the story of how a middle-aged spinster lost her mind, deserted her domestic gods in the city, took a furnished house for the summer out of town, and found herself involved in one of those mysterious crimes that keep our newspapers and detective agencies happy and prosperous.


Rachel Innes, a woman of a certain age and a city-dweller, has decided, at the urging of her two grown wards, Halsey and Gertrude (her brother's children), to rent a house in the country. The house, called Sunnyside, is a huge white elephant much bigger than they need, but set in nice surroundings near a lake. Just for a change of pace, Rachel decides to go ahead. The house in question belongs to Paul Armstrong, a bank president currently traveling in California for his health with his wife and doctor.

Soon, Rachel and her companion/servant, Liddy (prone to drama and hysteria), are on their way to Sunnyside. Rachel - looking forward to it. Liddy - reluctant and rightly predicting disaster.


Almost from the very first there are strange stirrings and sounds and things that go bump in the night. From a very eerie beginning - Rinehart is adept at setting the stage - a corpse soon turns up. Rinehart wastes no time.


Earlier, Gertrude and Halsey had brought a friend, Jack Bailey, over to visit. It is apparent that Gertrude is very fond of Jack and this is by way of a family introduction to her Aunt Rachel.


Very late that same night there is a disturbance in the house and a body is found at the bottom of the circular staircase. Further it is the body of a man no one in the family appears to know.


When Halsey Innes, goes missing that very night it becomes obvious that his sister Gertrude is covering for him and, of course, the police are suspicious. There has never been a murder in the small town and the cops are stepping all over themselves to make sure they get it right. But since the summer people are the staple of the town's economy, they have to move cautiously.


Rachel too knows that Gertrude is hiding something, but cannot get the girl to talk. In the meantime, the strange noises and stirrings continue in the house at night.


Within the next couple of days, the town's bank closes and most of the townspeople as well as Gertrude and Halsey are in danger of losing their savings and investments. Halsey is back home but refusing to say what he was up to the night of his disappearance.


When the dead body found in the house is finally identified as Alan Armstrong, son of the traveling president of the bank, it is obvious the murder and the bank failure are tied in together. Suspicion falls on Jack Bailey, Gertrude's friend, since he is the head cashier at the bank. The cops think he was conniving with Paul Armstrong, the missing bank president.


Jack Bailey is arrested but makes bail and disappears.


News comes from California that bank president Paul Armstrong has died of natural causes. His doctor soon shows up back in town. The widow too is back, urging Rachel to leave Sunnyside so she can move back in and recover from the double shocks.(Though it is known she hates the house.) But Rachel suspects that the house is at the bottom of the mystery and refuses to leave - her lease is up at the end of the summer and she is bound and determined to stay until the murderer is caught.


With everyone suspecting everyone else, and the house refusing to give up its secrets, you can hardly blame Rachel for wanting to stick it out and find out who the murderer is and what the unfathomable motive may be. There are red herrings and twists and turns galore and I, for one, could not stop turning the pages to see what happened next.


One of the main things I love about this book is the way that the house, Sunnyside, is made to seem like another character. Author Rinehart uses her astute powers of description to make the house's presence keenly felt. Despite it's name, the house appears dark and eerie and full of secrets. Especially since the electricity is turned off from the generator in town precisely at midnight and from then on till morning, it's candles or nothing.


Another thing I liked are the couple of b/w illustrations that accompany the story. One is used for the cover (of my edition) and it is quite atmospherically wonderful.


One of the things I disliked about the book is the way that minorities, especially African Americans (which make up part of the servant class in this story) are depicted. But as I read I remembered the times these books were written in and that these were the prevailing attitudes. Still, some of the comments are hard to read. Fortunately, they are few and far between.


The edition I have from the library (a first edition) is 362 pages long, so it's rather a lengthy, involved story. But despite its complexities the main action remains centered on the house and its summer occupants.


Before too long, there is more death, the appearance of a mysterious child, a kidnapping, a night time excursion to the graveyard and another defense of the house in which Rachel is called upon to fire a revolver several times.


What I did over the summer has never been more entertaining or more mysterious.