My Favorite Reads: THE MAN IN THE BROWN SUIT by Agatha Christie 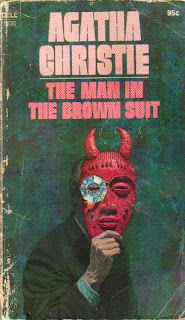 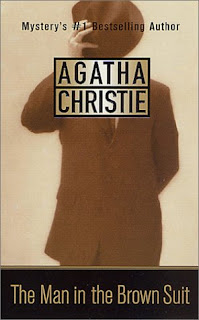 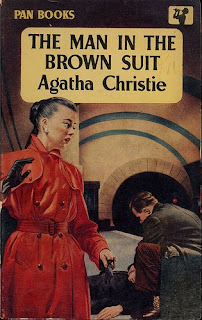 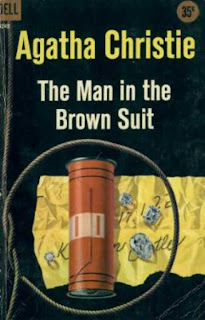 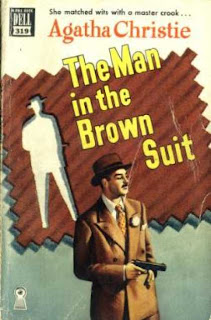 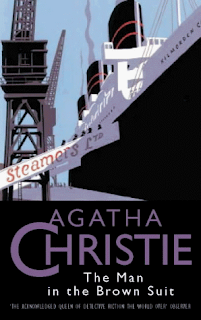 I'm meaning this post for the March edition of the Agatha Christie Carnival hosted by Kerrie over at MYSTERIES IN PARADISE. Every month, the Carnival has a great listing of links to other Agatha Christie inspired reviews and info. If you have any interest in the work of Agatha Christie and the Golden Age of mystery, it's fun to take a look. This month's Carnival debuts on March 24th.

THE MAN IN THE BROWN SUIT is early Christie (1924) and one of my favorites. A book that, for whatever reason, I never tire of re-reading. A terrific book for when you're feeling ill or out-of-sorts or need general cheering up OR are just in the mood for a good mystery/caper. For me, reading THE MAN IN THE BROWN SUIT is like visiting an old friend whose company I've been missing.

The heroine of the plot, Anne Beddingfeld is a young, plucky English girl - Agatha Christie created dozens of this type, take your pick, this is a particularly good one. She is a country lass whose paleontologist father ( ...one of England's greatest living authorities on Primitive Man.) has recently died and left Anne alone in the world, in need of earning a living. Well, Anne has always wanted to see the world so off to London she goes, hopeful of landing something that will lead to 'adventure'.

My affairs did not progress very fast. The house and furniture had been sold, and the amount realized had just covered our debts. As yet, I had not been successful in finding a post. Not that I really wanted one! I had the firm conviction that, if I went about looking for adventure, adventure would meet me halfway. It is a theory of mine that one always gets what one wants.

Anne's theory proves correct: on the way home from another fruitless job interview - she is temporarily staying with the family of her father's lawyer in London - she is witness to a horrible incident on the underground line. The death of a man who has fallen onto the third rail and been electrocuted.

From that moment, Anne's life will never be the same. She surmises that somehow the death was no mere accident. This, coupled with the mysterious presence on the platform of a deeply tanned man in a brown suit behaving suspiciously (while claiming to be a doctor), sets Anne Beddingfeld off on the adventure of a lifetime. All because a piece of paper and a man's suit both smelled of mothballs. Then shortly thereafter, there is the dead body of a woman found in an empty cottage. A cottage (owned by Sir Eustace Pedler M.P. who was abroad at the time) in which the same man with a deep tan seen by Anne on the underground, has been spotted by a witness.

While all of London and the cops are looking for 'the man in the brown suit', Anne finagles a job with a newspaper and is soon onboard a ship bound for Cape Town, South Africa. (!) Onboard are all sorts of interesting characters as you would imagine, including the always mysterious and attractive Christie creation, Colonel Race, also the beautiful and wealthy Mrs. Blair, who befriends Anne and becomes her cohort in conspiracy. Sir Eustace Pedler M.P. (coincidentally, the same Sir Eustace who owns the cottage in which the dead woman was found) on a minor diplomatic mission is traveling with his grim-faced secretary. Also on board a missionary who doesn't act like a missionary and a few other assorted characters. Just enough to make for a nice selection of suspects when danger lurks as, of course, it will.

The book is divided between Anne's first person account AND the entertaining journal pages of fellow traveler, Sir Eustace Pedler:

It is an extraordinary thing that I never seem to get any peace. I am a man who likes a quiet life. I like my Club, my rubber of Bridge, a well-cooked meal, a sound wine. I like England in the summer, and the Riviera in the winter. I have no desire to participate in sensational happenings. Sometimes, in front of a good fire, I do not object to reding about them in the newspaper. But that is as far as I am willing to go. My object in life is to be thoroughly comfortable. I have devoted a certain amount of thought and a considerable amount of money, to further that end. But I cannot say that I always succeed. If things to do actually happen to me, they happen around me, and frequently, in spite of myself, I become involved. I hate being involved.

Pedler is one of Agatha Chrisite's more inspired creations and despite his faults, one of my favorite characters.

Onboard ship, when a small package is thrust through Anne's cabin window in the middle of one night AND on another night, a mysterious and attractive young man (with a deep tan) bursts into the cabin, wounded and needing help, the adventure threatens to overwhelm Anne. But only just. Ever resourceful, she manages beautifully. From that moment on, though, not only is she in fear for her life, but her heart has been touched as well.

(An incident like this was also instrumental to the plot in one of my other favorite Agatha Christie stories: THEY CAME TO BAGHDAD, but with rather a different outcome.)

After the ship docks in Cape Town, Anne Beddingfeld must go through several incredible trials and dangerous tribulations, including kidnapping, before the truth is known, the bad guy revealed and all claims of the heart are settled to everyone's satisfaction. Not bad for a country lass who'd never been out of England before.

There's no getting around it. I love this book.
Posted by Yvette at 1:01 PM

Email ThisBlogThis!Share to TwitterShare to FacebookShare to Pinterest
Labels: Agatha Christie, Agatha Christie Carnival, My Favorite Reads, The Man in the Brown Suit