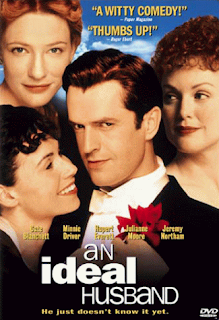 Yeah, quite a cast. I love this film based on the play written by the great Irish playwright and poet, Oscar Wilde. My two favorite cast members in this case, are the one and only devilishly, impishly, suave Rupert Everett and the wonderful Minnie Driver. Both are perfection in this movie. Everett spins his witty Oscar Wilde bon mots as if he just thought of them himself. To love oneself is the beginning of a lifelong romance. 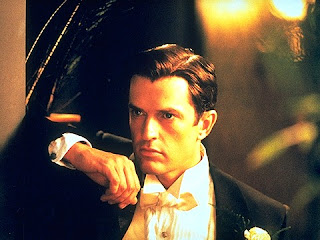 The rest of the splendid cast (directed by Oliver Parker in a screenplay adapted by Parker) is excellent. Though I had trouble at first believing that Julianne Moore could play cold-hearted AND a blackmailer to boot. (I should have known she can do practically anything.) AND that Cate Blanchett could play the rather vapid role of the wife. But both delivered the goods. Jeremy Northam is not my favorite actor, I must say. But even he fits the role of blackmail victim rather well. He is the perfect uptight, government minister.
Unfortunately, most of the people in this Victorian social comedy (with dark undertones), are not especially likable. That may throw you off for a bit. But the great Rupert's character, Lord Goring, just oozes indulgent charm and you'll be smitten with him, I'm sure, as I was. Minnie's character is Mabel Chiltern, younger sister to Jerermy Northam's character, Sir Robert Chiltern. To my mind, she is the only really likable woman in the plot, if you're going to choose. And the way she goes about casting her cap for the ultra-confirmed bachelor, Lord Goring, is wonderful to behold. She is so subtle, so sure he's the man for her, that it just makes you smile to think she just might corral him.
And he, I think, is well aware of her skills, but falls for her anyway. As I said: perfection. My favorite scene in the whole film is the marriage proposal. Rupert Everett as Goring is so uneasy, so dead set against marriage he practically squirms with reluctance. You can see all the arguments against going on within him and yet, he simply cannot help himself, he has fallen for Mabel and there's not much he's going to do about it except ask her to marry him. His reputation as London's most confirmed bachelor is done for.
The scenes these two are in just sparkle with wit and life and amusement. As do the scenes between Goring and his exasperated father, played by the remarkable John Wood.
Okay, the rest of the plot: Lord Goring - London's idlest man - is called on to help his good friend Sir Robert Chiltern - played by Jeremy Northam - who is snared in a blackmailing scheme. Mrs. Cheveley - played by Julianne Moore - a shady character from the past has turned up with an incriminating letter that proves Chiltern's riches are based on insider knowledge. Something to do with the Brits and the Suez Canal. It's really not that important to know the details of this past indiscretion, it's more a macguffin kind of thing. Just something that gets the ball rolling.

Since Sir Chiltern is a government minister, Mrs. Cheveley wants his public support for a fraudulent canal scheme proposed for Argentina. A con she is obviously heavily involved in. Few of these parts of the plot make clear sense, but they really don't have to. What is important is the fact of blackmail and the possible ruination of Chiltern's marriage and his political career. 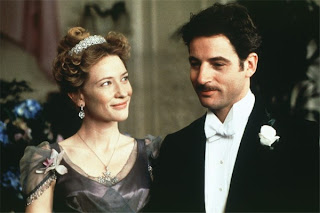 Chiltern is married to Lady Gertrude - played by Cate Blanchett - a morally inflexible young woman who likes to believe that her Chiltern is the 'ideal' husband - a man of impeccable character and no dark shadows. If she finds out that Chiltern has (or had) clay feet, she'd never forgive and might divorce him. She is firm in her beliefs, you see. For her, he must pretend perfection. 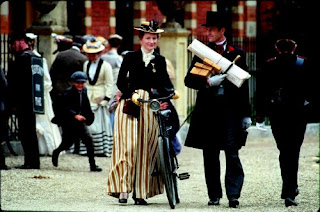 Okay so all this takes place within a day or two in London (Grosvenor Square) and in some gorgeous country house settings, with the actors wearing the kind of costumes that make your mouth water. (Well, they did, mine.) I couldn't find any good photos, but if you watch the trailer - see link at the bottom - you'll see the settings and clothing in their glory. 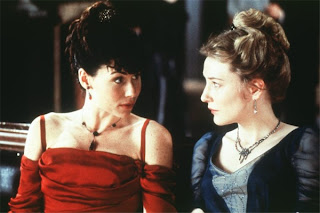 While the ins and outs of the blackmail scheme are taking place and lots of witty banter and witticisms are spouted, Lord Goring continues to spar with Sir Chiltern's sister Mabel and she with him. Eventually Goring, who appears the only truly intelligent man in the cast, comes up with a scheme to outfox the clever Mrs. Cheveley and save his friend. Though in the end, most of the truth comes out anyway and everyone forgives everyone else and all's well that ends well. My favorite kind of story. 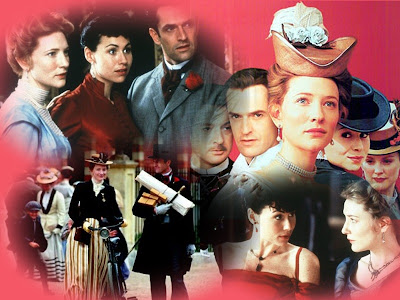 A Link to the Film's Trailer.

Email ThisBlogThis!Share to TwitterShare to FacebookShare to Pinterest
Labels: A Favorite Film, An Ideal Husband, Movies