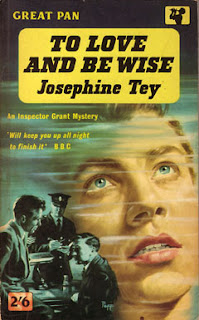 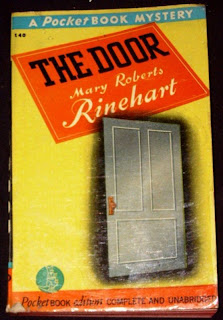 The Vintage Mystery Reading Challenge is hosted by Bev at MY READER'S BLOCK. Check out who else is participating and read their reviews.
TO LOVE AND BE WISE by Josephine Tey (1950)
Many thanks go to Les over at CLASSIC MYSTERIES for recommending this title. It was one I'd never heard of before even though I am a fan of Tey and had read most of her books. I have to say that this is one of the more unusual mysteries I've ever read. I should have expected no less from the pen of Josephine Tey, a writer known for her inventive story-telling and unique point of view.
Again, Scotland Yard's Inspector Grant is called in to decipher a most troubling conundrum: the disappearance, while camping out overnight in the English countryside, of the enigmatic, young photographer Leslie Searle.
Is it murder? Is it kidnapping? Is it suicide? And where is the body, by the way?
The incredibly good-looking Searle - for reasons of his own - had managed to ingratiate himself into the family of author Lavinia Fitch, becoming a thorn in the side of famous (and oh-so-self-important) radio personality Walter Whitmore and intriguing the heck out of Walter's fiancee, Liz Garrowby. Garrowby is a shy, soft-spoken woman Whitmore has taken for granted never having had a perceived rival before.
Grant had been responsible, in a way, for introducing Searle into Fitch's family circle, so he felt an added interest in solving Searle's mysterious disappearance while the photographer was on a walking tour with Whitmore - the two planning on doing a book together.
TO LOVE AND BE WISE is about mistaken assumptions, gender expectations and the terrible weight of suspicion on the lives of the innocent. It has a heck of a surprise ending that I can practically guarantee you will not see coming.

THE DOOR (1921) by Mary Roberts Rinehart.
Okay, this book has an ending that makes you initially say, "Oh no, she didn't." And then you have to shake your head in admiration for the audacity of Mary Roberts Rinehart.
Again as with most of Rinehart's books, we have murderous doings among the well-to-do in large houses staffed with many servants. Here we have several nasty murders by as cold-blooded a killer as you're likely to meet in any of Rinehart's books. The plot is one of Rinehart's more convoluted ones - you have to stop and catch your breath while you read the denouement just to keep track of who did what to whom.
I don't know how Rinehart did this sort of thing. She must have kept meticulous notes and outlined everything to within an inch of its life. But the story doesn't show all this frantic work behind the scenes. It just moves organically, one unlikely occurrence after another. As I've said before and will probably say again while working my way through Rinehart's books, I simply could not put this book down. I stayed up last night reading until the very last word. (And only figured out who the murderer was during the last few pages. And even then, I said, nah, can't be.)
When current nurse in residence and old family retainer Sarah Gittings goes missing one night, the family of wealthy spinster Elizabeth Bell is thrown into turmoil by as complex a web of secrets, lies and misdirection as you will ever try to decipher. When after the first murder, the canny Inspector Harrison is introduced, it's hard to believe that several more murders and a kidnapping will occur. But even with cops crawling all over the place, this murderer remains undaunted.
THE DOOR is a prime example of the 'had I but known' school of writing of which Rinehart was queen. There is plenty of 'if only she'd said' or 'if only he'd said' going on. But never enough to annoy, only just enough to make you wonder what on earth is meant. I do like the first person viewpoint of Elizabeth Bell, she is a sensible, no-nonsense sort not above taking the law into her own hands.
As the mystery deepens and an arrest is made, a family member convicted and sentenced, Inspector Harrison is not totally convinced they have the right man. Is it possible that a cold-blooded killer has committed the perfect crime?
The vast majority of crimes, I believe, are never solved by any single method of any single individual. Complex crimes, I mean, without distinct clues and obvious motives.
Certainly in the case of Sarah Gittings, and in those which followed it, the final solution was a combination of luck and - curiously enough - the temporary physical disability of one individual.
And I am filled with shuddering horror when I think where we all might be but for this last.
Posted by Yvette at 1:49 PM