When I think of the Letter H in the context of mystery/crime fiction/thrillers, there are two possibilities: Hercule Poirot or Sherlock Holmes. For the Crime Alphabet Meme being hosted by Kerrie at Mysteries in Paradise I'm choosing Holmes. Simply put he has been and will always be my favorite fictional character as well as the best and most brilliant detective (consulting or otherwise) in the entire history of crime and detection.

I began reading the Sherlock Holmes stories early and just quietly and easily fell under their spell. Of the novels, I am a major fan of THE HOUND OF THE BASKERVILLES. THE SIGN OF FOUR and A STUDY IN SCARLET, not so much. I also love most of the short stories though I haven't, lately, read them as frequently as I used to and my memory is not what it should be. (I see though I could have just as easily chosen The Hound for my letter H. But I'll stick with Holmes.)

For whatever magical reason, the stories continue to capture the imagination these many years, these many readings later. Holmes is just one of those eternal characters. If you ask me to list chapter and verse why this should be so, I don't know that I could. But once you fall under the spell of his personality, his oddities and eccentricities, you are his forever.
I always say that I fell in love with Holmes when I was a kid and I just never fell out. One of several reasons I am an Anglophile is because of Holmes.
When I traveled to London many years ago, I even went so far as to stay on Baker Street at the Sherlock Holmes Hotel. Yes, I can see you all rolling your eyes. But you know, once I saw the name of the hotel I really had no choice. I even brought home a deerstalker cap. Ha!
If you have the entire Holmes canon (as I do) in one or two volumes, it's fun to dip in now and then and pick up one of the stories. Occasionally I will listen to an audio version which is just as much fun. I've never grown tired of listening to THE HOUND OF THE BASKERVILLES. The audios are much better than any of the filmed versions unfortunately. For whatever reason, they always muck up the story one way or another when it's filmed. So I'll stick to the audio or the written word.
I am still, to this moment, thrilled when I hear or read the words: "Come Watson, come! The game is afoot!" This is my favorite line in literature.

I am fond of watching Jeremy Brett play Holmes in the series he did for PBS in the 80's. (Available on Netflix instant play which is really most accommodating of them.) They're as faithful to the stories as you're going to find - especially the first two seasons. Just beautifully done. Brett is the ultimate Holmes. Later the shows veered away from the canon and the series suffered, as of course, it must. 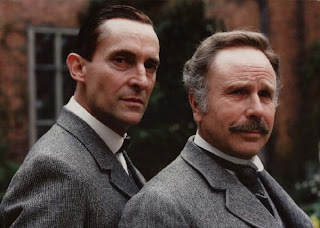 Another good choice for Holmes-watching are the films done by the second best Holmes of all time: Basil Rathbone. I am an unabashed fan of Basil Rathbone and he can do no wrong in my book, so take care if you are in the mood to criticize. These films are kind of a mish-mash, of course, since they never followed any of the actual Conan Doyle stories but merely took bits and pieces of a few and spliced them here and there to make 'new' stories. 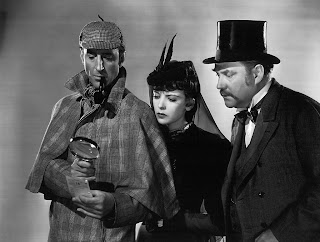 Most are dreadful. But I never minded because I had a good time watching Basil and Nigel Bruce giving their all to the definitive (until Jeremy Brett) portrayals of Holmes and Watson. The films are watchable ONLY because of these two actors and that's why, in spite of my misgivings, I still recommend them. (I also had a great crush on Basil, but let's not go there.)

There have been, of course, hundreds of attempts by various writers over the years to capture the 'magic' of Holmes, continuing the character in 'newly discovered' stories written by Watson. Most of them I haven't read. Of those I have, I've liked THE GIANT RAT OF SUMATRA by Rick Boyer and THE REVENGE OF THE HOUND by Michael Hardwick. But my very favorite interpretation continues to be that of Laure R. King's. In her series beginning in 1994 with THE BEEKEEPER'S APPRENTICE she has taken Holmes and turned him into a flesh and blood man, something even Doyle had trouble with. The series will now be 11 books along with the publication in September 2011 of The Pirate King. I can't wait. This is my favorite historical mystery series over-all and I recommend it highly. 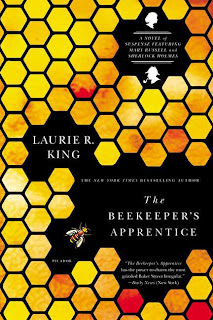 For a full list of Laurie R. King's Sherlock Holmes books, please check out this link.
For those of us fortunate enough to have fallen under the spell of Holmes and Watson, nothing much else needs to be said, I'm preaching to the converted here. For those less fortunate: you don't know what you're missing.
For links to all the bloggers participating in the Crime Fiction Alphabet Letter 2011 Meme please go to Kerrie's blog MYSTERIES IN PARADISE.
Posted by Yvette at 5:11 PM