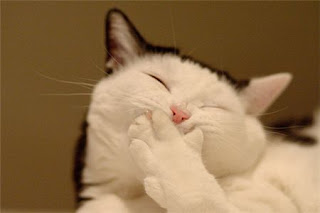 Jeff Cohen's books always make me laugh. His sense of humor is somewhat similar to mine, so I usually get a kick out of what he has to say, or more importantly perhaps, what his characters have to say. (Isn't that the same thing you might ask...hmmm, maybe.) Hey, how could you not like a guy who is the Numero Uno Marx Brothers fan in the world? He's big on Mel Brooks too. (Though we have a bit of a taste difference in the film, Young Frankenstein: he LOVES it, I merely like it. But hey, no body's perfect.)

Here's a link to his latest blog tirade...well, not so much a tirade, as a, well, yeah, what the heck, it is a tirade. Sort of. Hey, There's A Dead Guy in the Living Room is the name of the blog, Let's Talk About Sex is the post.
Jeff is talking about sex in cozy mysteries, that invisible occurrence - we do agree it must occur somewhere, sometime, or else where do all the little kiddies come from? Just no writing about it. No sex in cozies, no curse words, no dead dogs or cats or other furry creatures. There, Jeff and I agree wholeheartedly. A dead dog is the kiss of death. The wise cozy writer will refrain. Even if it would make a cat laugh.
I love cozy mysteries. Especially in this heightened anniversary year of the greatest dame of all, Agatha Christie. Not that she should be thought of as strictly a cozy writer - she is, was, a Grande Dame of the Golden Age of Mystery, after all. But you know what I mean.
It's not that cozies aren't seething with stirrings of sex. Cozies very much can be...seething, but usually only in a jolly kind of way. (Not that ALL cozies are necessarily funny, but in general, quite a lot of them can be.) Just no talking about sex. And yet, bumping someone off does indicate, in as drastic a way as possible, that some sort of dark emotion (maybe even sexual) lurks, at least in the bosom of the killer. But in cozies, any sex must be handled off-stage (along with the murder), imagined by the reader. It's there all right, just slightly off in the shadows somewhere. I don't know about you but I don't mind that at all. I have a rather vivid imagination after all.
And don't get me started on cursing, dammit.
P.S. Lee Child's stalwart, intimidating, stop-at-nothing, take-no-prisoners hero, Jack Reacher doesn't curse either.
Posted by Yvette at 11:27 AM