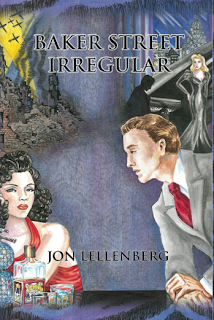 Besides author name recognition, what else makes you sit up and take notice when you're drifting along online, checking out book blogs, sites, reviews, etc? Half an eye here, half an eye there. What's the special word that suddenly jumps out and slows you down? Or is it an expression? A well-designed book cover? Or a certain combo of letters, names, subject matter? Do you have a special trigger?

If I see anything having to do with Sherlock Holmes, I'll generally slow down and take a good look. This, combined with fighting Nazis in WWII, will usually do it for me. I mean, who can resist?
A new book incorporating the original Baker Street Irregulars (a group of Holmes aficionados named after the original, original group of rowdy street urchins Sherlock Holmes employed in several of his cases) has gotten a starred review in Publisher's Weekly. The book, Baker Street Irregular, is not due out until November, at a hefty price I'm thinking - $39.95 - but you'll probably be able to get it for less than that. Hopefully my library will snag a copy. This sounds like something I will definitely be wanting to read.
The author, Jon Lellenberg is Official Historian of the Baker Street Irregulars and co-author (with Daniel Stashower and Charles Foley) of the Agatha Award winning (for best non-fiction) Arthur Conan Doyle : A Life in Letters. (Doyle was a prolific letter writer.)
Here's part of the starred review for Baker Street Irregular from Publishers Weekly:
Lellenberg "...makes an impressive debut with this gripping period spy novel. In 1933, Woody Hazelbaker, a young Wall Street lawyer, gets an unexpected and unlikely career break after taking on mobster Owney Madden as a client. The knowledge Woody gains from assisting the criminal in liquidating his interests in a number of businesses proves handy years later on the eve of WWII when Woody and some fellow Sherlockians get involved in anti-Nazi efforts amid strong isolationist sentiment. Lellenberg does an excellent job at bringing the original Irregulars, who included Christopher Morley and Rex Stout, to life..."
Two names caught my interest immediately: Christopher Morley and Rex Stout - two of my favorite authors, as characters in a book. That closed the deal for me. Can't wait to read this one.
Here's a link to read more about Baker Street Irregular by Jon Lellenberg.
Correction: My apologies to author Jon Lellenberg, I originally referred to him as Ellenberg because I wasn't paying close enough attention to details.
Posted by Yvette at 6:18 PM