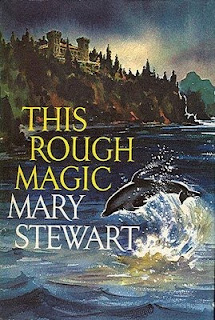 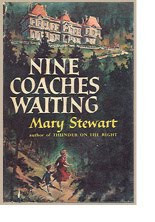 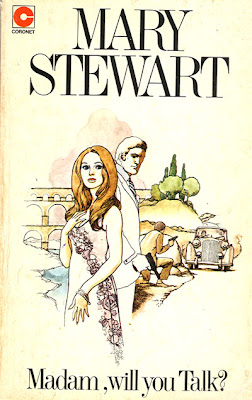 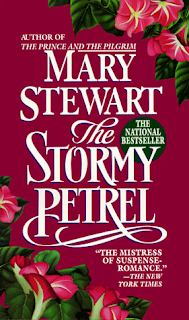 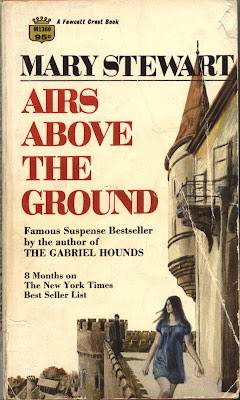 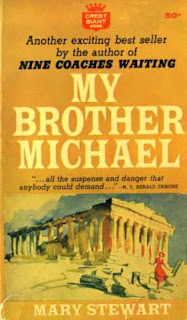 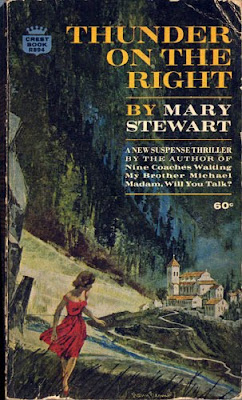 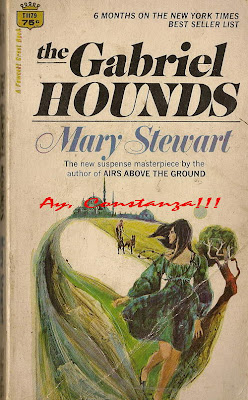 One of the Grande Dames of the gothic mystery, Mary Stewart has a birthday today. She was born in 1917, so that makes her 94, I believe. A word or two about Ms. Stewart's books: I discovered them at just the right time in my life. I was young, just finishing up my Agatha Christie phase (not that I ever got over it, as you well know), looking for another type of mystery series with, perhaps, a strong love interest mixed in. At the time, I didn't even know that there was a whole other category of books known as 'romance'. My only excuse: I was a sheltered child. Ha!

I had no idea gothics existed, didn't even know what the word meant. Though I did have a hint from having read Jane Eyre. But, I didn't, at the time, connect the two. I had already developed a strong penchant for the tall, dark and handsome male character who sported enigmatic airs, lurked in the shadows and caused all manner of problems for the innocent heroine. Why can't they write more books like Jane Eyre but with a 'modern' twist? I thought at the time. (Well, maybe I didn't think twist, but you know what I mean.)

Little did I know.
Through Mary Stewart, I discovered Phyllis Whitney and Victoria Holt, not to mention Daphne DuMaurier, and a whole host of other wonderful authors writing up a gothic storm of books. Subsequently I spent months and months reading every one I could get my hands on. One of my favorite things about these books were the covers. They were all, basically, the same idea: A frightened girl with long hair flapping in the wind (gotta' have long hair), walking alone on the moors or other such forbidding landscape, in the distance could be seen the dark outline of a castle or some other sort of large, imposing structure. That's it. You saw that in the bookstore and you knew you had to take a look. (Exception: This Rough Magic which seems to have had a dolphin on the cover in place of the girl. But it did have a mansion on a cliff.)
Of the Stewart books, I'd say Nine Coaches Waiting and My Brother Michael were the favorites (if I had to choose). Though Airs Above the Ground was and continues to be one of the best book titles ever conceived. (A terrific book, too.) I remember reading it and trying to figure out a way to include the words in ordinary conversation. But since I didn't ride show horses in dressage, there was very little chance of my being able to rattle off the phrase. (Airs above the ground actually describes the leap when a horse has all four legs off the ground at the same time during dressage. The leap is taken from a standing position which makes it that much more difficult and beautiful. Airs above the ground. Perfect.)
Besides the fine writing, Mary Stewart's books had something else going for them that I really appreciated: she tended to set her books in different countries, so you got a moody good mystery with love interest and a bit of a travelogue to boot. Fabulous, for someone like me who dreamed of traveling one day.
I never did get into Mary Stewart's Merlin series, I think because I'd begun to move on to other authors, by the time they came out. But I still remember the Stewart books with a deep affection. After all, they were steady companions at a very impressionable time in my life.
Here's a link to a Mary Stewart Fan Blog that looks full of info.
Posted by Yvette at 1:41 PM