Cat Among the Pigeons by Agatha Christie 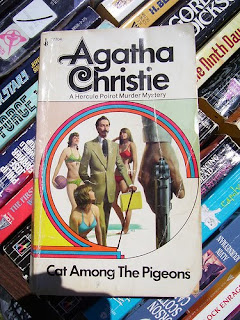 There's an Agatha Christie Challenge going around the blogs in honor of what would have been the beloved writer's 120th birthday this month. I didn't sign up, mostly because this blog is a new gig for me and I'm still feeling my way around, but also because I don't like reading under deadline. However, that doesn't mean I won't EVER join in a challenge, it just means that for now I'm trying to figure things out - there are so many of them! I am a person who is easily side-tracked, so I want to make sure I know what's what before I dive in. It is fun though to go from blog to blog to see who's writing what about the great Agatha and her books.

I even found out, from Miss Lemon's blog that the archeologist Max Mallowan, Miss Christie's second husband, had written a memoir. Who knew? I plan on reading it, of course.

I usually re-read Cat Among the Pigeons around this time of year just for the fun of it. Part of my autumn ritual. It's a back-to-school book since most of the action takes place at Meadowbank, an exclusive English boarding school for girls. To my mind, the book is also one of Christie's jewels of characterization. (Though some claim Christie lacks that particular strength, I disagree. This book, one among many, is proof enough for me of her talent for characterization.) The crimes themselves and the solution, spring from the types of character these people have.
This is a Hercule Poirot mystery although he does not make his appearance until about three quarters of the way into the book, so that in itself is a bit unusual. But once he does, the cat is then really among the pigeons. Though I wonder too, if Christie didn't mean the murderer when she coined the title. Either/or. Up until that point the build-up of the story is revealed to us from the varying viewpoints of several different characters beginning with a second chapter set in a small, revolution-prone Middle Eastern principality. An Arab prince and his commoner friend, an Englishman, make a desperate attempt to flee for their lives, a small package is hidden, a sharp-eyed observer who happens to be in the right place at the right time sees something she was not meant to see and events are swiftly set into motion leading, incongruously, back to the hallowed grounds of Meadowbrook, an exclusive and very uppercrust English institution.
Cat Among the Pigeons is part spy thriller and part mystery with international complications. One of several intriguing characters who make an appearance is the redoubtable Mr. Robinson, the enigmatic and mysterious money man, the behind-the-scenes intimate of governments who shows up now and then in Christies' books.
As the school year begins at Meadowbank once again, Miss Bulstrode, the formidable headmistress and founder of the school, is thinking seriously of retiring, turning the reins over to someone else. She is feeling her age and wonders if the school is becoming too settled in its ways. But to whom can she turn? Meadowbanks is her own creation, the result of years of unflinching devotion and hard work. All over Europe, well -to-do families send their daughters to Meadowbank, secure in the knowledge that they will be well educated, but more importantly, will graduate from Meadowbanks as finished ladies. Who ever takes over for Miss Bulstrode must be fashioned of a certain mettle. But, after all, there is only one Miss Bulstrode.
That first hectic day of school, there are the usual disruptions and distractions from parents, students, teachers, new members of staff settling in, the arrival of cars, limousines, one after the other, depositing one young girl after another, daughters of the rich and famous, among them a Middle-Eastern princess. Humdrum and to be expected, but Miss Bulstrode feels uneasy. She can't help but feel she's overlooked something important.
Murder at Meadowbank is not only unexpected, it is unthinkable. And yet, when it happens it doesn't come as much of a surprise to the reader. What are we here for after all? Still, it is one of Christie's most interesting and, in many ways, most forbidding settings, a place so exalted that even the whisper of scandal can demolish years of hard work. Can Meadowbank survive multiple murders? Will Miss Bulstrode retire? Is that a moot question in light of events? Will there be enough school left to hand over to anyone? Oh, and who is the murderer and where will they strike next?
Cat Among the Pigeons features several of Agatha Christie's most engaging characters, among them the young (15 years old) but astute Julia Upjohn - she and her friend Jennifer appear to be at the heart of the mystery. They behave entirely in keeping with their differing personalities, Julia eventually acting on an idea that helps propel the mystery to its solution.
If I have any quibble at all with anything, it's the idea that a certain character would notice something at the beginning, something exquisitely important, and not follow up with a query to someone, after all, her daughter is attending the school. But, at the same time, that person's personality allows for this sort of oversight, so my quibble is not a major one.
This particular book has a terrific ending (not so unusual in an Agatha Christie mystery), complete with a very last minute arrival of an important witness, a startling denouement and a delivery of a package by Mr. Robinson himself, to a character who, up until the last couple of pages we'd never even known existed. Love it.
Posted by Yvette at 8:22 PM