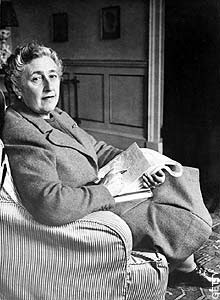 If I hadn't been so busy grumbling and sneering out the window at the weather and the NY Times (a paper I normally love), I'd have posted this sooner.

This month, on the 15th to be exact, the Grande Dame of Mystery Writers, Agatha Christie, would have been 120 years old. Second only to the Bible is book selling popularity, Christie's books are beloved by millions of mystery reading fans all over the world. (Including me.) In honor of Christie, there are many on-going and up-coming anniversary doings in the real as well as blogging world. Here's a link to Janet Rudolph's blog, Mystery Fanfare in which she explains the hoopla and points out the sites of various Christie celebrations. Another link here leads you to Kerrie Smith of Mysteries in Paradise, who has organized the exciting Agatha Christie 120 Blog Tour. You can read more about the Tour and the Christie Reading Challenge at Kerrie's blog.
I first began reading Agatha Christie books when I was a young girl, discovered her after I'd finished my share of Nancy Drews and Dana Girls and was looking around for more 'grown up' mysteries. I don't remember the very first Christie book I read, but I have a feeling it was The Seven Dials Mystery. Wouldn't swear to it though. After that there was no stopping me. I read all the Christie books I could get my hands on and I've been doing it ever since. I believe I've read every book and short story in the Christie canon, except for the Egyptian book. I still re-read my favorites every once in awhile. In fact, when I'm ill, nothing will do but an Agatha Christie mystery. For me, they are the ultimate in comfort reading. I don't even bother to note them on my yearly reading list anymore since they are so second nature to me.
Towards the end of 2008, I was diagnosed with breast cancer and almost immediately had to have a mastectomy. The day before surgery, my dear mother passed away. To say it was not an easy time for me is a mild understatement. But with the help of family and friends, I managed to get through the roughest few weeks I've ever experienced. In a way, I like to think that Agatha Christie was one of those friends because, when I felt like reading, it was her books I turned to. When I was feeling truly down, especially during the chemo crapola, I could often find escape in my favorite Christie books.
Many years ago, I had the good fortune to visit England, Scotland and Wales for three weeks, and one of the very first things we did once we arrived in London, was go to the theater to see Christie's long running play, The Mousetrap. It was an unforgettable play, an unforgettable night.
I've always credited Dame Agatha with my lifelong interest in all things British. Remarkably, her books helped turn me, a girl from the lower east side of Manhattan, into an Anglophile from the very first.
Posted by Yvette at 4:37 PM