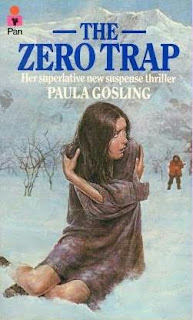 Reviewing a not-well-known book published in 1980 seems a bit of a lost cause, but what the heck. The Zero Trap by Paula Gosling, is still available on some book sites and at the library. Jim Huang's book recommending Overlooked, Under appreciated and Forgotten Mystery Novels, They Died in Vain (about which I blogged a few days ago), mentions that The Zero Trap is out of print, but I had no trouble running it down and I'm glad I did. This is a terrific thriller which deserves a bit of overdue p.r. so I'm grateful to Jim Huang for mentioning it.

A U.S. Army plane is hijacked over the Middle East, the nine passengers gassed insensibly into submission. That the passengers include a nine year old boy (an especially well written character), makes the plot that much more affecting, the bad guys that much more chilling. When these passengers wake up, they find they are imprisoned in a luxurious old house, quite literally in the middle of nowhere. What's worse, they are surrounded by snow and ice and deadly cold. In fact, the cold itself is their prison guard. It is obvious they were flown into their predicament since a nearby lake is frozen solid and there are no roads anywhere anyone can see. But just to make sure no one gets any ideas of trying to hike out, the passengers' shoes and boots have been taken away, as well as any coats or heavy outer clothing. These people are meant, by their unknown captors, to stay in frozen place.
As the various personalities of the passengers become more defined, we begin to see an unlikely one rise above the others and assume a sort of grudging leadership. Bespectacled, music-loving, astronomy professor David Skinner is a not too typical sort of hero. But he is brilliant, an expert gatherer of information and an astute observer. He soon reasons that they are in Finland. But no one else in the world, except for their kidnapper, of course, knows their location.
One of the other passengers is the self-effacing Laura Ainslie, engaged to an ambitious Army captain and daughter of an American three-star general. Is it possible she is the target at the center of the kidnapping plot? Or could it be Skinner? His brother, a captain in the English navy, is involved in some sort of Cold War intrigue.
Soon enough, it becomes obvious that a spy lurks among the passengers, not to mention, a murderer. One of the passengers is Joe Mallick, currently in the custody of a U.S. Marshall and on the way back to the U.S. to stand trial for murder. But when one of the hostages is murdered, is Hallick the killer? Has he killed again? For that matter, has he actually killed before? Forced to interact with each other because of their situation (especially once the house's aging boiler develops trouble), no one has the luxury of setting themselves apart from the others, not if they want to survive.
Part of the lure of this book is in reading how the ingenious Skinner manages to work out a way to go out into the perishing cold to try and assess their surroundings. He also creates an inventive way (perhaps too inventive), to alert their location to the authorities when photographs of the hostages are taken to prove they are still alive.
Switching from the viewpoints of those family members and authorities searching for the missing while wondering who, what, when, where and why (mostly the why and the where) and the points of view of hostages Skinner and Ainslie, author Gosling creates a harrowing tale of non-stop suspense. Too good a story to be out of print and forgotten.
Posted by Yvette at 11:20 AM

Email ThisBlogThis!Share to TwitterShare to FacebookShare to Pinterest
Labels: Review