Ticket To Ride by Ed Gorman

A couple of thoughts before I begin: I don't like, in my reviews, to give too many actual details about the story, don't like to give too much away. Don't feel it's necessary. This is one reason why some reviews online turn me off. I don't even like to read many details on a book's backcover or flaps. I mean, especially in a mystery. Leave it a mystery - know what I mean? Give me an idea and let it go at that. This is my take on reviewing and what you'll get from me. Oh, and another thing, I will never review a book I truly dislike. I'm just not cut out that way. (In truth I rarely if ever finish books I don't like, so how could I review them honestly?) I also will not review every book I read. Life's too short. Just wanted to make my policy clear before we go too much further. 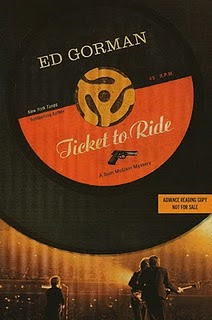 For whatever reason, I like books set in the 50's and 60's. (I like MAD MEN, too. I worked in a place in the early sixties populated by 'mad men' types, so much so, the series makes me laugh inappropriately sometimes.) Maybe because I was a kid during those years, well, kid into young adult anyway, references to the manners, music and food make me smile. Not that I wish it would all come back, but it's nice to remember - some of it. Of course it all depends on the particular writer and story.

Prolific author Ed Gorman's Sam McCain series is set just then. McCain is a mid-western, small town nebbish trying to get along, a nice enough short guy (he will often tell you about the heartbreak of height) looking to find romance, help his parents (his elderly father is in failing health) and, oh yeah, when he gets the chance: put a few murderers in jail. A not too successful lawyer and investigator (almost by default), McCain works for Judge Esme Anne Whitney, aka Her Most Sacred Excellency, a mover and shaker in the town of Black River Falls, Ohio, where she is high muckymuck and Sam a mere schlep.

The often funny but nasty prejudices of small town society are very well delineated by author Gorman, especially in the interchanges between Sam and the judge and Sam and the intellectually challenged (laughably so) sheriff, Cliffie Sykes. There is a cast of characters, some recurring, some not, who, by turns help to make Sam's life a heaven or hell. There are many laugh out loud moments, and some not so much. Each book is a good balance of drama and comedy (especially in Sam's wisecracks and observations of small town life), underscored by dark undercurrents swirling beneath the surface.

The series is ten books old now, each title bearing the name of a song from that era. Beginning with the first book: The Day the Music Died which takes place during the aftermath of the death, in a plane crash, of rock music icon Buddy Holly. Some of the other titles are: Wake Up Little Susie, Will You Still Love Me Tomorrow? (some of us believe this is the greatest rock and roll song ever written), Save the Last Dance For Me, Breaking Up Is Hard To Do, well, you get the idea. I've read them all and can recommend them, some more highly than others. But on the whole, this is a terrific series, probably not as well known as it should be. Gorman has the knack for making small town particularities come to life in a very humorous way.

There are two kinds of relationships that get the most attention in Black River Falls. Divorces and the dissolution of business partnerships. The first is always juicier, because most of the time there is an extra lover involved. You get to scorn somebody and feel morally superior. That's hard to beat.

Business partner break-ups rarely involve sex, but they do sometimes involve extralegal activities such as fraud and embezzlement. Even without breasts and trysts being mentioned, such nefarious business practices can get pretty interesting. Three years ago, two men who owned the same bar got into a fight after hours, and one killed the other with a tire iron. That's not as good as the high-school teacher who impregnated one of his students her senior year, but it'll do on a slow night.

I've just finished the very latest Sam McCain book, Ticket to Ride. This one takes place in 1965, so time has been marching on in McCain's world. The Vietnam War is at its height. The Beatles and the Rolling Stones rule the airwaves, boys in long hair are the bete noire of every school administration. Sam's number has not been called yet, but it's in the mix. He and some of his friends are members of a war protest group, reviled by most of the town. Things get out of hand one evening when at a planned protest, Lou Bennett, a well-to-do man whose son was killed fighting in Vietnam the year before, grabs the mike and throws the non-violent rally into chaos.
When later that night Bennett is murdered, the suspected killer seems all too obvious - the guy who'd fought with Bennett at the rally, onstage for all to see. A couple of more murders follow as McCain is once more caught up in the search for a killer, all the time trying to retain his honor and his sense of who he is. McCain grows on you from book to book and you find yourself hoping for the best for him.
These murderous slices of quirky small town life (always told in the first person, my favorite point of view) are not-to-be-missed. Not even if you have no real idea what life was like back then.
Posted by Yvette at 1:16 PM