Half A Year of Reading 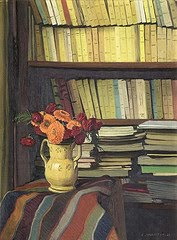 Time to post my favorite books of the year so far - the year being a bit more than half over and all. A few of the books listed were not published in 2010, but were read by me for the first time this year. This is a crowded bunch, but a nice one. Lots of variety, fiction and non-fiction. It's going to be very difficult to pick The Ten Best at the end of the year. I'm probably going to have to go Best Twenty. It's one of those embarassment of riches years. And still plenty more left to be read. So, here goes, in no particular order for now.

The Sweetness at the Bottom of the Pie by Alan Bradley
The Weed That Strings the Hangman's Bag by Alan Bradley
The First Rule by Robert Crais
61 Hours by Lee Child
The Lion by Nelson DeMille
Shades of Grey by Jasper Fforde
Bryant and May On the Loose by Christopher Fowler
Operation Mincemeat by Ben MacIntyre
The Professor and the Madman by Simon Winchester
Shadows Return by Lynn Flewelling
Agent Zigzag by Ben MacIntyre
A Thousand Days in Venice by Marlena deBlasi
Thereby Hangs a Tail by Spencer Quinn
Night Of The Living Deed by E.J. Copperman
Blackout by Connie Willis
The Spellmans Strike Again by Lisa Lutz
Grave Goods by Ariana Franklin
A Murderous Procession by Ariana Franklin
Major Pettigrew's Last Stand by Helen Simonson
A River in the Sky by Elizabeth Peters
The Lost City of Z by David Grann
Do the Windows Open? by Julie Hecht
Vegas Nerve by Susan Rogers Cooper
One Good Dog by Susan Wilson
The City and the City by China Mieville
The God of the Hive by Laurie R. King
Death of a Peer by Ngaio Marsh
Died in the Wool by Ngaio Marsh
Night at the Vulcan by Ngaio Marsh
A Clutch of Constables by Ngaio Marsh
Last Ditch by Ngaio Marsh
Spinsters in Jeopardy by Ngaio Marsh
Killer Dolphin by Ngaio Marsh
Posted by Yvette at 9:40 PM