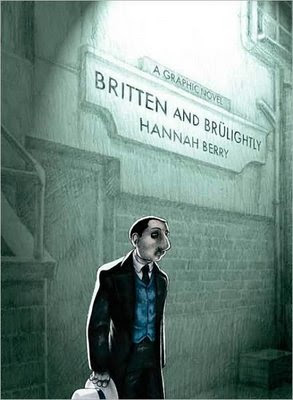 Britten and Brulightly by Hannah Berry is only the second graphic novel I've ever read and as much as I liked it, I don't know that I'm ready to do this again. I'm convinced it takes a certain turn of mind to truly enjoy graphic novels - a particularity which I'm not sure I have. I'll tell you what it is: you have to enjoy reading while looking at pictures. No, it's not the same as comics or even picture books, at least not to my eye. In Britten and Brulightly, the artwork is so involving (and in certain way, emotionally confrontational), you almost have to set up a projector in your mind, the drawings are that vivid as you move from page to page. It unsettled me somewhat.

But having said that, I will admit I got caught up this moody and oh-so-noir mystery. So here I am, recommending it.
The story is beautifully illustrated. It is damn hard to believe this is Berry's debut as a graphic novelist. She expertly creates a sad, frayed world where rainy days and dark corners at every turn are the norm. She uses tints, bare washes of color here and there, to enhance the atmosphere. I also liked her use of odd angles, the switching around of points of reference as well as views.
This is the story of private eye Fernandez Britten, his very unconventional partner, Brulightly (who happens to be a teabag, albeit a teabag with personality), and a murder investigation. Tired of secrets, deceit and lies, the weary detective Britten feels the burden of this complex case too personally.
(The world-weary detective is an old icon, but Perry approaches it in a new way.) Britten, a lonely man with a perennially non-committal expression and tiny little mustache, longs to do some bit of good in the world but fears he never has and never will. He is a man in limbo.
On a 'dark and stormy night' he is approached by the fiancee of supposed suicide, Berni Kudos.
Of course she insists Kudos was murdered. Britten then takes on what becomes, in a very singular way, the most important case of his life
If you've never read a graphic novel, I'd say this is the one to begin with.
Posted by Yvette at 9:29 PM