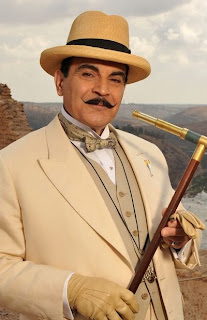 Nothing much to say except that I LOVE this photo of the marvelous David Suchet as the one and only Hercule Poirot. Too bad they've taken the great Agatha Christie's stories and bollixed them up, yet again. I mean, why bother to mess with perfection?? Christie's long suit was her plotting, so here's a dumb idea: let's mess with just that - the plotting. This is what killed the latest two incarnations of Jane Marple for me. If I'm in a Marple mood, I either read the books again or watch the wonderful Joan Hickson in those earlier adaptations which were almost completely true to the books. (Or as true as one can get given the time restrictions of film.)

Let's improve MURDER ON THE ORIENT EXPRESS - ye gads!! Whose idea was that? Heads should roll.
Does anyone else agree with me that Christie's brilliant plots should be left alone if they can't be filmed properly by people who respect the canon? Am I whistling in the dark?
Posted by Yvette at 12:28 PM