The Sweetness at the Bottom of the Pie

I really don't have much to say about Bradley's book since just about everyone has said all there is to be said about it. It is nothing less than a brilliant debut. Author Alan Bradley and his creation has been nominated for almost every book award ever conceived. And rightly so.

THE SWEETNESS AT THE BOTTOM OF THE PIE introduces us to the delightfully precocious, deviously brilliant 12 year old Flavia de Luce. She and her older sisters are growing up in an old ramshackle manor house in the English countryside of the 1950's.. Mostly left to fend for themselves, they are ignored by their feckless, stamp-collecting father who appears to dwell in a separate universe of his own making.
Bullied by her sisters, Flavia putters about in the old chemist lab at the top of the house amusing herself by concocting foul poisons and odd potions and imagining the use of same on various household members. But it is not the eccentricity of the child and/or the book's events that make the deepest impression (at least not to me), it is Flavia's extreme loneliness. Bradley develops this in an almost offhand manner, but we get it. To me, it is the heart and soul of the book.
Having said that, and as much as I loved this book, I found the second in the series, THE WEED THAT STRINGS THE HANGMAN'S BAG even better.
Well, in truth, the reason for this blog post now so late in the day (after all, SWEETNESS was published last year) is that recently, I found a portrait on the Art Inconnu blog by George Spencer Watson (1869 -1934) of his daughter Mary and thought immediately I'd stumbled on the essence of Flavia. See what you think. 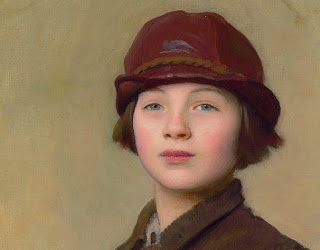 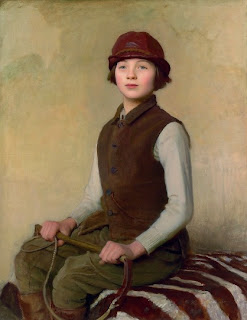