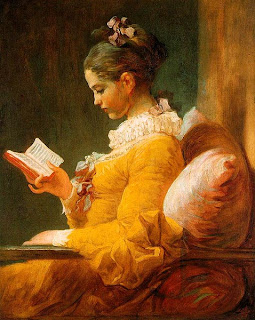 Are you a re-reader? I am.
Despite all the new and/or unread books patiently waiting their turn in different piles all around the house, there are just certain books I keep going back to over and over again over the years - like visiting with old friends. Some books are read once, enjoyed, then set aside never to be opened again. But then there are those books that, for whatever reason, just keep calling me back. In Jasper Fforde's books featuring literature 'detective' Thursday Next, some of the characters can slip in and out of books (literally) and become part of the story (if they're not careful) though technically they are only allowed to witness. When Thursday touches the spines of books lined up on shelves, she feels the pull of the books and sees inside them, almost as if the spines themselves were portals into another world. (Actually, in the Fforde books the spines are
portals into other worlds.)
Well, that's how I feel sometimes. I touch the spine of certain books and I feel the familiar world inside beckoning me. Too fanciful? Maybe. But then, I am a fanciful person. (In case you hadn't guessed that from looking at my blog.)
Here are just a few of the old friends I like to revisit once in awhile:
Most of Agatha Christie's books, especially: They Came to Baghdad, The Man In the Brown Suit, So Many Steps To Death, Evil Under the Sun, Cat Among the Pigeons, Halloween Party, A Murder Is Announced, Mrs. McGinty's Dead, 4:50 From Paddington, Passenger to Frankfurt, Murder in Mesopotamia, The Secret of Chimneys, Dead Man's Folly, The ABC Murders...
All of Rex Stout's Nero Wolfe books, especially:
Plot It Yourself, The League of Frightened Men, Murder By the Book, Might As Well Be Dead, Please Pass the Guilt, The Mother Hunt, The Doorbell Rang, The Rubber Band, The Golden Spiders...
Amelia Peadbody books by Elizabeth Peters:
Crocodile on the Sandbank, The Mummy Case, Lion in the Valley, The Curse of the Pharaohs, Serpent on the Crown...
Vicky Bliss books by Elizabeth Peters:
Trojan Gold, Night Train to Memphis
Any and all Sherlock Holmes stories by Arthur Conan Doyle.
Most especially: The Hound of the Baskervilles
Mary Russell and Sherlock Holmes books by Laurie R. King.
Most especially: The Beekeeper's Apprentice, O Jerusalem, The Moor, Justice Hall...
Lost in a Good Book by Jasper Fforde
Well of Lost Plots by Jasper Fforde
Something Rotten by Jasper Fforde
Loot by Aaron Elkins
Pride and Prejudice by Jane Austen
The Great Gatsby by F. Scott Fitzgerald
The Outsider by Penelope Williamson
Dirty Linen by Nicholas Kilmer
Early Autumn by Robert Parker
Past Time by Robert Parker
Scandal by Amanda Quick
Ravished by Amanda Quick
Grand Passion by Jayne Ann Krentz
Hidden Talents by Jayne Ann Krentz
Trust Me by Jayne Ann Krentz
Lord Carew's Bride by Mary Balogh
Miss Emmaline and the Archangel by Rachel Lee
Empire Falls by Richard Russo
Most of Robert Crais' Elvis Cole and Joe Pike books.
Especially: The Monkey's Raincoat, Lullaby Land, Free Fall, Indigo Slam, Voodoo River, L.A. Requiem...
How Reading Changed My Life by Anna Quindlen, a short, brilliant, life-enhancing book.
The Daughter of Time by Josephine Tey
Brat Farrar by Josephine Tey
Of course, there are more, but these titles are just to give you an idea of what goes on around here. I also have to say that my preference seems to be for older books, so lots of the new stuff I read seems to be just older books I'd never read before.
But of course, I also read the new, new stuff as well.
As my friend Jean of BookJeannie likes to say, 'so many books, so little time'.
Posted by Yvette at 1:54 PM

Email ThisBlogThis!Share to TwitterShare to FacebookShare to Pinterest
Labels: Fixated on Lists, re-reading