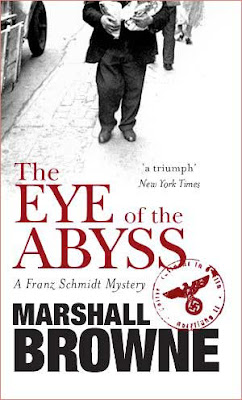 "He who fights with monsters might take care lest he thereby become a monster. And if you gaze for long into an abyss, the abyss gazes also into you." Friedrich Nietzsche

I've discovered that some book blogs use Friday as a day to remind readers of 'forgotten' books deserving of more than just a desultory look the first time around. What with so much being published all the time, so much to read and so little time to really play catch-up, it's often easy enough to overlook a good book lost in the shuffle of time. I posted earlier about some other forgotten books and listed some of my favorites then (you can check the Older Posts if you like, for They Died in Vain), but when I learned of 'Forgotten Friday' I liked the idea and thought I'd join in. I'm not sure if I have to officially notify anyone, but if I do, I'll figure it out. In the meantime, here's my 'forgotten' nominee for today, Friday, August 20th.


The Eye of the Abyss by the inimitable Marshall Browne. (Published in 2002 by Thomas Dunne Books.)


Perhaps because Browne is an Australian writer he is not as well known as he should be in this country and that's really too bad. He needs some sort of publicity machine to spread the word near and far. It's not only that his books are not well known, but he seems to disappear in between the writing of them. That simply won't do.


I am extremely fond of Browne's very well reviewed and received, Inspector Anders series: The Wooden Leg of Inspector Anders (and isn't that one of the greatest titles of any book ever?), Inspector Anders and the Ship of Fools and Inspector Anders and the Blood Vendetta. (This last one is not available in the U.S. far as I can tell, though it was published in 2006.) This is a series set in Italy and, in my opinion, is on par with the more famous author Donna Leon's books and though only three titles in so far, I wish it were just as well known.


I'd thought Browne's brilliant novel, Eye of the Abyss, set in 1938 Germany, was a stand-alone, but it turns out that a sequel, The Iron Heart, featuring Franz Schmidt, the 'hero' of the first book, was published in 2009. I've checked around but it doesn't seem to be available here.


Anyway, let's talk about Eye of the Abyss for now and hope for the best for those other two titles. In a way, this is an odd sort of book mainly because it features a banker as the main protagonist - a profession which would hardly inspire visions of the heroic ideal. Especially since the banker in question is a meek German whose main job is to move the Third Reich's money around. But hero he does become.


Quietly and unobtrusively, accountant Franz Schmidt begins to see the light (there are several allusions to 'seeing' in the book but I won't spoil it by revealing the reason why) as he's drawn, in spite of himself, into a plot to throw a spanner into the Nazis' well-oiled monetary machine. Urged by the obsequious manager of the bank to 'look the other way' as all the rest of Germany is doing in the wake of the Nazi ascendancy, Schmidt at first, does just that. Soon though, he is driven to defy the edict that has ruled his life and begins to view his self-satisfaction from a different angle.


It's 'the how' of Schmidt's determined conversion (once he realizes that there are only two sides: good and evil) that grabs the imagination. Here is a man who is the epitome of the 'go along to get along' type and yet, when fate calls upon him, he delivers. It is author Browne's deft touch and perfect understanding of his own creation, that makes all this believable.


Part of this story of the blossoming of a man's soul, concerns Schmidt's perilous attempt to help a Jewish woman. She is the very self-possessed Fraulein Dressler, working in his office. When Dietrich, an officious Nazi official takes charge of the bank, the personnel files are inspected for suspected Jews. Fraulein Dressler qualifies.


But he aims to try and to that end, hatches a desperate plan. Meanwhile Dietrich, the Nazi official, singles Schmidt out for attention as Schmidt's appearance of imperturbability intrigues him. There is one darkly funny scene that almost defies description when Dietrich invites Schmidt for a drink and then, much to Schmidt's disbelief, tries to seduce him. (He is a middle-aged accountant for God's sake!)


How Schmidt becomes the 'hero' of his own life is an intriguing and in some ways, terrifying, tale worth reading and remembering.