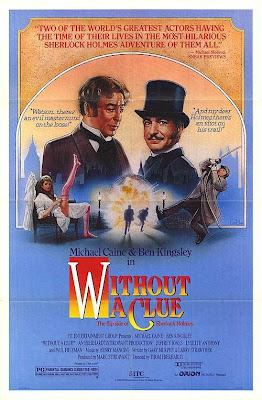 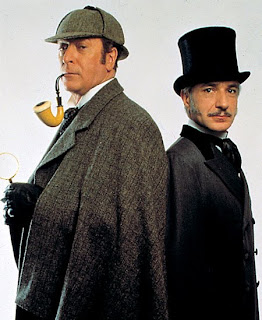 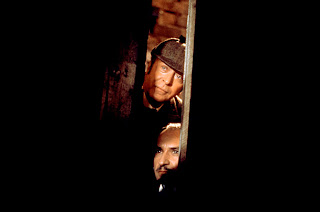 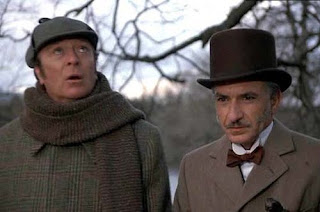 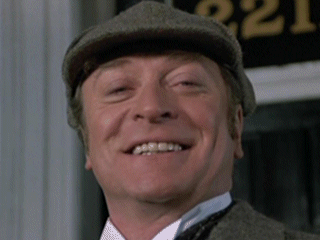 I was talking about Sherlock Holmes in one of yesterday's posts, talking about Jeremy Brett, the Holmes of my dreams. Today I'm talking about the Holmes of my nightmares - but in a good way. Ha! I remember seeing the film, Without A Clue, starring Michael Caine and Ben Kingsley many years ago in a nearly empty theater. It was just me and my ex-husband, well, he wasn't my ex at the time or I'd hardly have gone to the movies with him, but anyway, there we were. The two of us and about twenty others. Hard to watch a movie under those conditions, especially a comedy.

Without A Clue is a hilarious send-up of the Holmes myth and the relationship of Watson and Holmes. (So much funnier to my eyes than the Billy Wilder attempt at Holmes comedy, The Private Life of Sherlock Holmes, which I'd always found deadly dull, a shade too fussy and almost unwatchable.) In this version from the 1980's, written by Gary Murphy and Larry Strawther, it is Watson, played by Ben Kingsley, who is the brilliant detective. So the whole Holmes thing has been turned on its head. In fact, Holmes doesn't even exist as a real person since he is merely a figment of Watson's imagination - a character he's created to be more dashing than himself, star in his stories and sell newspapers. When Holmes becomes larger than life, Watson is forced to hire a drunken sot of an out-of-work actor, played delightfully by Michael Caine, to portray a real live Holmes for the police and fans who refuse to accept Watson as a 'dashing' Crime Solving Doctor.

Everyone wants Holmes on the case when foul murder and evil plots ensue, as of course, they do. The crime itself is not all that interesting and the last third of the film sort of degenerates into a blow-'em up, shoot-'em up. (Almost as if tacked on from another movie.) The villain, unfortunately, is one of those indivisible sorts who lurks in the shadows trying to look fiendishly
omnipotent. He weighs down the film and really keeps it from becoming the comedy classic it could have been.
But, imperfect as it is, I still love the film. If you like British slapstick humor mixed with suspense and murder, then this is your cup of tea. (Did I really just say that?)
In fact, in that nearly empty theater, it seems my ex and I were the only two people howling with laughter at the atrociousness happening up on the screen. Yes, embarrassing as it may sound. Obviously we were not surrounded by Holmes aficionados. Or maybe they were all purists and were affronted by the very idea of laughing at anything Holmes related.
More probably the rest of the people in that theater on that night years ago, had no sense of humor and worse, no sense of the ridiculousness of life. They were simply an audience - dare I say it? - without a clue.
Link here for movie trailer.
Posted by Yvette at 1:00 PM