Tuesday's Overlooked (or Forgotten) Films: THEY MIGHT BE GIANTS starring George C. Scott and Joanne Woodward 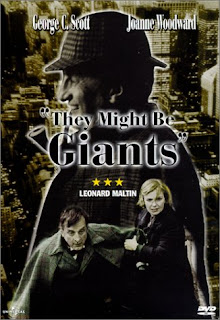 As we know by now, Tuesday is Overlooked (or Forgotten) Movies day, a weekly meme hosted by Todd Mason at his blog, SWEET FREEDOM. Please use the link to check in and see what other overlooked films other bloggers are talking about today.

THEY MIGHT BE GIANTS is a sweetheart of a movie that's achieved a bit of a cult status over the years since it was released and ignored by Universal in 1971. The studio obviously didn't know it had a special film on its hands (sound familiar?) - a film needing special handling, if only for it's unusual ending.

THEY MIGHT BE GIANTS is directed by Anthony Harvey, the screenplay was adapted from his own play by James Goldman. When I watched it on Netflix the other night I didn't remember the supermarket scene near the end at all. So I did a little research. Turns out the scene was chopped up in the theater release, but included in its original state in this current dvd release. We could have done without it since it's a nonsensical moment which almost brings the film to a halt. The scene is meant as some sort of gobbledy-gook about consumerism (I think) and maybe even the state of the American city, but it fails to do much for the story or the characters. It just doesn't belong in the movie.

With that proviso, I'll go ahead and give you my thoughts. 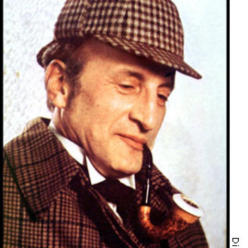 I am a huge fan of George C. Scott and in this movie he is at his lovable best. Yes, the growly guy could do lovable when he set his mind to it. The only other film in which I remember him being so easy to like was THE LIST OF ADRIAN MESSENGER which, coincidentally I watched last night for the umpteenth time.

Here he plays retired judge Justin Playfair. (Can you imagine a judge named Playfair? Love it.) The judge has not been himself since his wife Lucy passed away. For a year or so, Playfair has believed himself to be Sherlock Holmes on the hunt for Professor Moriarity, his arch enemy.

The judge lives in a Manhattan townhouse with his brother Blevin (Lester Rawlins) and Blevin's wife, Daisy (Rue McClanahan). We are made to understand that Blevin owes some not very nice guys some very big money. To that end, he wants to have the judge classified non compos mentis and signed, sealed and delivered into the hands of a shady psychiatric hospital.

Playfair's new doctor is a dedicated but sad-sacky psychoanalyst, played by Joanne Woodward at her plain-jane-but-beautiful best. At first the judge is adamantly opposed to her interference in his quest to take down Moriarity (whom we never meet). The judge is convinced Moriarity is behind all the evil that transpires in the city. (Wouldn't surprise me in the slightest.)

From the little she knows and can observe, the doctor declares the judge a classic case of paranoia perfection. Classics are cured 'once in a generation.'

When Playfair finds out the doctor's name is Watson, then of course he wants her on the case. It's 'Mildred Watson' but since when have first name details mattered? So off they go in search of Moriarity. Holmes and Watson, together again. 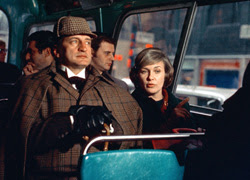 Watson is bemused by Holmes (as well as professionally intrigued) as he leads her into more and more hair-brained encounters, skulking about the city looking for 'clues'. She comes to admire the judge's -aka Holmes - philosophy of good and evil. She calls the judge a Don Quixote aiming at windmills, but he, in a key scene explains to her the difference between himself and Cervantes' creation. He makes eminent sense.

This unlikely pair grow closer as their adventures around the city lead them into several encounters with the odd and eccentric, including a sweet elderly couple who haven't set foot outside their old apartment in over 40 years. They devote themselves entirely to their topiary garden on the roof. This is one of my favorite parts in the film.

Eventually Holmes and Watson are joined in their quest by all the misfits they've encountered along the way in a kind of march of the 'irregulars'.

But all good things must come to an end and this is where the film falters slightly. With the cops on their trail as well as the bad guys taking potshots at the judge (if he dies, the brother gets all his money) Holmes and Watson find themselves in the end, alone and facing a quarry who supposedly is waiting for them in the bowels of Central Park. 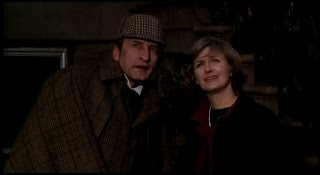 Does the world really exist for us to make of it what we will?


I won't say anymore. This is one of those near perfect films that just missed the mark but still is good enough to enchant.
Posted by Yvette at 10:36 AM