This is the 5th installment in one of the finest series of fantasies (set in an alternate reality) I've ever read. Okay, so I was not always a reader of fantasy or sci-fi, but I like to think I know what's well written enough so that genre doesn't really matter. Let's just say that this is one of the finest series of books I've ever read. My discovery of author Naomi Novik's writing expertise as well as her daunting imagination and inventive style has made me, over the course of her previous and current books, a very happy reader.
If you are denying yourself this wonderful reading experience because of the 'fantasy' angle, deny no more. Just know that you are doing yourself an injustice if you continue in your stubbornness.

To learn more about Temeraire and the work of Naomi Novik, you can check HIS MAJESTY'S DRAGON Wikipedia page here.  Or you can link to Naomi Novik's website here.


*********************************
At the beginning of the series, the setting is England - though in later books, we travel to China, Africa, Australia and even South America. It is the early part of the 19th century. The French are out to conquer the world and Napoleon is on the march. His megalomania and ambition are even more enduring, more globally encompassing than in historical reality. (Though in reality they were extreme enough.)

Beginning with book number one, HIS MAJESTY'S DRAGON, we are immediately thrust onto a sailing ship at sea and the alternate universe in which everything exists as it did in our history books, except for the dragons. In this world, various nations employ aerial corps of dragons which help individual armies in battle over land and sea. Don't roll your eyes, Novik makes it all work beautifully. (There is a very handy three book omnibus available of the first three novels.)

The dragon aerial corps have their own branch of service with its own rules and regulations - adaptable as they must be where living, breathing, sentient beasts of the air are involved. The birthing of dragons  from eggs and the choosing of each beast's individual 'captain' are inventively shown us in the very first book when Temeraire is born aboard naval Captain Will Laurence's ship.

Laurence is strictly Navy and has no plans to join the aerial forces of which, in truth, he is unfamiliar.  But that is before the little newborn dragon decides that Laurence is the captain for him. It is up to the dragon in the first moments after birth to choose who he will tolerate or else he might turn feral and refuse to comply with the plans of men. So everything has to be handled very tactfully, procedure must be followed.

The dragons learn language from overhearing it while in the egg and once born, decide whether to speak or not. They are sentient beings with their own personalities, each suited, by size and breed to a different branch of the Aerial service. Each dragon carries a crew on its back, suited to the animal's size and strength. The smallest dragons are used as mail carriers and messengers and carry only one crew member. But the larger beasts are capable of carrying many men attached by leather harnesses.

Since some dragons will only carry a female captain, allowances are made in this branch of the service for women. The politics of it though, are unchanging. British Headquarters prefers to look the other way rather than admit women are serving in any section of their armed forces.

You'll be happy to know that Naomi Novik never makes any of this dragon business too precious or God forbid, cutesy. It all makes logical sense as this alternate world she has created, or rather, enhanced, is revealed.

I've always been interested in the history of the Napoleonic Wars and the reality of it all is intriguing enough, but Novik has made it even more exciting by adding this unexpected twist of war from the air. You don't have to be an expert though - I'm anything but. I'm simply assuming that everyone knows something about Napoleon and his quest for power in the 19th century.

In VICTORY OF EAGLES, Laurence has already been condemned as a traitor for events which occurred in the previous book - EMPIRE OF IVORY. By refusing to follow an inhuman and inhumane order, Laurence has turned his back on all he holds dear - family, fellow captains and servicemen, his own honor as an officer and a gentleman - to do what is right.

An outcast, he would normally have been hanged almost immediately except for one thing - Temeraire. Laurence is thrown in prison and the dragon sent to the breeding grounds in Scotland.The large warrior dragon cannot be controlled except by keeping Laurence alive and threatening his death if Temeraire doesn't comply. War is a dirty, heartless business.

Eventually, Temeraire and Laurence find their way back to each other and are allowed to join in the final assault against Napoleon's forces which have crossed the English Channel and occupied London.

Waterloo never happened and Napoleon's superior forces, land and aerial, have had extraordinary success. It is up to the British to stand and fight and prevent their country from being permanently  overrun by the French. The Brits have no allies in Europe.

Wellesley (not yet made Duke of Wellington) is in charge of all British land and aerial forces, he uses his tactical brilliance to try and defeat Napoleon as the French army marches north from London to meet the British who have massed their forces some miles from the city. With Nelson (still alive after Trafalgar) in charge at sea, the superiority of the English navy must count for something. It is an awe-inspiring battle with an unexpected ending which leads us into the next book, TONGUES OF SERPENTS.

A sample of Novik's writing, to give you the flavor of how she handles a brief action sequence:

The fog was thinning now a little, blowing away from the land, and far to the rear of the French lines, dragons were leaping into the air, one after another. And now the advantage would tell: none of the French dragons, with their short and frequent rests, were withdrawing. There would be no rest for Temeraire, or any of the British dragons who had been aloft and fighting since first light.

Temeraire pulled up very short, abruptly, so Laurence was flung against his leather straps. A determined crowd of six little Garde-de-Lyons pouring fresh into the field had charged him in a body, and now began shrieking in exaggerated voices and belaboring his head and neck wildly, batting with wings and claws.

Temeraire backwinged with two mighty strokes and roared to scatter them, the tremor of the divine wind knocking them back, but in those few moments, the enormous Grand Chevalier they had seen earlier came crashing past, and threw herself down at the square of Coldstream Guards.

The pikes and bayonets were stiffened, but she did not come down upon them directly. Instead she struck the ground directly before the front ranks, so heavily many of the men were flung off their feet, and turning around roared full in all their faces. It was a moral assault only, but a dragon the size of a large barn roaring less than ten paces away might make the bravest man blanch. Bayonets wavered and dipped, then twenty riflemen stood up on her back and fired a terrible and concentrated volley into the stunned ranks.

A knot of men fell all together, opening a vulnerable gap in the wall of the square [of soldiers], and she thrust her massive foreleg into that open space and swept it along the line, all the way to the corner of the square, crushing and knocking down men and pikes like so many blades of grass. Temeraire roared furiously and dived towards her, but one of the Garde-de-Lyons flung itself in his path.

....He seized the little dragon's neck in his jaws, and with a jerk of his head broke it, a single dreadful snap. He let the beast go falling out of the sky, a little scrap of scarlet and blue, the small handful of crewmen scattering like falling leaves through the air behind.

Naomi Novik has a brilliant knack for writing all this as if it actually happened, she writes battle sequences exactly as you might imagine them happening. The clever way she has worked out how dragons of differing breeds would be used in battle is exceptionally rational and real.

You say to yourself, well, yes, yes, this is exactly how it would be if such and such had actually existed. Novik makes the incredible totally credible.

She gives Temeraire his own engaging personality - so much so that you dread anything happening to him, though you know he is a creature of war.

"Novik's influences run the gamut from Jane Austen to Patrick O'Brian, with a side trip through Anne McCaffrey. Her books are completely involving and probably addictive, their central conceit explored in clever detail with a deal of wit and historical insight."  San Francisco Chronicle.

"These are beautifully written novels: not only fresh, original, and fast-paced, but full of wonderful characters with real heart."  Peter Jackson ( Oscar winning director of the Lord of the Rings films, who has optioned the Temeraire books.)

I am currently reading MASTER AND COMMANDER by Patrick O'Brian and am hard-pressed not to look to the skies for Temeraire and his fellow dragons swooping down upon the enemies of England. 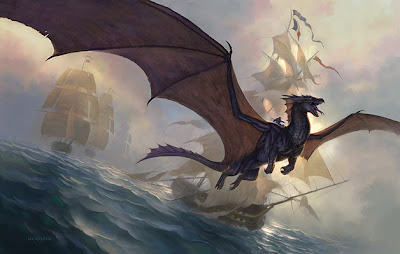 Couldn't find an artist attribution.
Note: The books in this series should be read in order to get the full effect of the times and the relationship between Laurence and Temeraire and the other characters which inhabit Naomi Novik's world. Check here for a full listing of the Temeraire books.

Gorgeous fan art by Daniel Govar. There is a huge Temeraire online community.
Watch the trailer for the new Temeraire book CRUCIBLE OF GOLD, out this month in the U.S.
Posted by Yvette at 1:35 PM