March 15th - The Ides of March 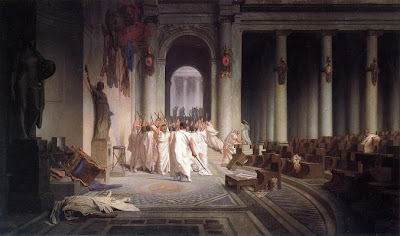 Well, we know that Julius Caesar didn't 'beware', didn't heed the old soothsayer. The Roman Emperor went forward to meet his death seemingly unconscious of the fact that the men around him all had daggers up their sleeves.

Maybe if the old man had been more specific in his warning.

But then, Shakespeare wouldn't have had fodder for a play and wouldn't have written the speech that Marc Anthony delivers - with the opening line that we all remember from school, "Friends, Romans, countrymen, lend me your ears..."

Here's a link to Marlon Brando's stirring rendition of the speech from the 1953, Joseph L Mankiewicz film. Perhaps not done as in classic Shakespearean precedent, but I've always found it very effective.

Brando puts heart and soul into the words, something occasionally left out in the quest to get the words across rather than their meaning. Link.

Marlon Brando as Marc Anthony
Posted by Yvette at 10:51 AM