Friday's Forgotten Book: SHE SHALL HAVE MURDER (1949) by Delano Ames

Kind of a beat-up old cover, but best I could find online of the cover I actually have.
Today it's a combo: SHE SHALL HAVE MURDER is my Friday Forgotten post as well as my entry in Bev's VINTAGE MYSTERY READING CHALLENGE.

Don't forget to check in at Patti Abbot's website, PATTINASE, to see what other forgotten books other bloggers are talking about today.

I was not familiar with this author, though his name rings some sort of bell - maybe it's just that the Delano part reminds me of Franklin Delano Roosevelt. Anyway, I read a review of this book on one of the blogs (can't remember which one) and decided to take a look. I mean, how could I resist reading a book in which the hero's first name is Dagobert? And what's more, no one in the cast of characters seems to think this is a odd name. So maybe it wasn't - way back when.

I wonder how it's pronounced? I'm assuming - Dago-Bear. Please correct me if I'm wrong.

Dagobert Brown is a guy who avoids work as best he can (one wonders how he pays his rent) and is currently determined to have his girlfriend Jane write a mystery set in her office, featuring characters similar to her work-mates. He would write the book himself but he's too busy (doing what - who knows?) and besides, someone has to think up the plot.

Jane Hamish is a very tolerant working girl - a law clerk in an office run by an elderly type named Playfair, an attorney who thinks nothing of postponing work in favor of crossword puzzles. In fact, he prefers to treat his employees as members of one happy family. He's kind of engaging, really. I have to say that of all the characters, Mr. Playfair won me over immediately.

Jane narrates the story and turns an almost blind eye to Dagobert's wilder inclinations and mental leaps of fancy.

Anyway, the law-office has its fair share of typicals with typical problems, including a Lothario named (for reasons I can't figure) Major Jimmy Stewart (no one appears to notice that the name is the same as a famous movie star, but perhaps it's  old news ) who's dated every woman on staff. Besides Jane there's Sarah, the young typist and Rosemary, the older chief clerk who has delusions of romance. There's also a six foot tall weisenheimer office boy who's not above chicanery and a spot of blackmail.

When Mr. Playfair's elderly client, Mrs. Robjohn - a muddle-headed eccentric - dies suddenly of natural causes after first having declared over and over that she was being stalked by killers, Dagobert Brown suspects murder. Though only the day before he'd stated that Mrs. Robjohn was hardly the type to get murdered, it would just be too obvious.

No one else suspects the old lady was done in, but Dagobert will have his way.

Working independently of the cops and with the not-so-willing Jane as his sleuthing partner, Dagobert begins the search for clues - anything that will involve anyone and everyone at the office. He also advises Jane to write every thing down as it happens - for their manuscript's sake.

That's the gist of the plot and the fun, I think, of this mystery is in the personalities of the various characters, as well as the often snappy dialogue. There's also the fun, I think, that Ames obviously had in writing this story.

I'm going to try and locate a couple more Delano Ames books just to see what's what with Dagobert and Jane. 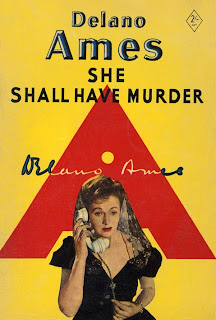 To get a list of all Delano Ames titles, please use this link.
Posted by Yvette at 10:00 AM