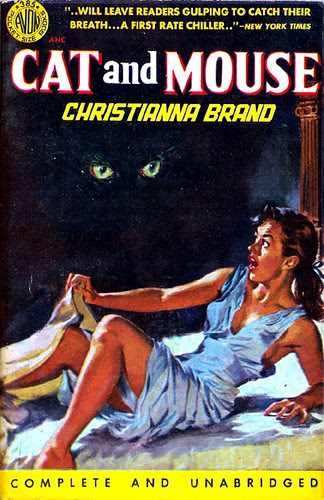 Today is Forgotten Books Day - the weekly meme hosted by Patti Abbott at her blog, PATTINASE. Don't forget to take a look and see what other forgotten books other bloggers are talking about today.

Again I'm writing about a book which works as an entry in Bev's Vintage Mysteries Reading Challenge so I'm very pleased about that. Kind of handy how it all works out. (Check the link in the box on my left sideboard to check in with Bev's Challenge.) Even if the book was not up to my expectations.

Reading the enthusiastic blurbs associated with this book, I really thought I was in for an exceptional read. After all, I'd read a couple of Brand's books before and liked them very much. This one is even touted by Julian Symons as one the Hundred Best Crime Stories.

Obviously, somewhere, somehow, one of us went wrong. It's hard for me to believe that the same Christianna Brand who wrote GREEN FOR DANGER and TOUR DE FORCE also wrote this maudlin, mawkish gothic-infused 'young woman in danger' mystery. A tour de force, it is not. Though I suspect it was meant to be.

Let's put it this way, there are enough strange histrionics, red herrings and dopey misdirections in this story to swell the pages of several of those nice 1950's books with covers featuring a woman running away from a castle, hair flying in the wind. In the gloom of night, of course.

Well, obviously, the book is not a total disaster or I wouldn't be writing about it. I did finish reading it, skipping around a bit, but eventually muddling through. After all, this is Christianna Brand we're talking about.

The first chapter is delicious. Really. You think you're in for something pretty special. Plus, the story is based on a true incident relayed to Christianna Brand by a friend. Sounds good.

We begin in the offices of a magazine called, Girls Together which is exactly what it sounds like. It's one of those necessaries filled with fashion inspiration, make-up tips, advice to the lovelorn - the usual.

Two editors, referred to as Miss Friendly-wise and Miss Let's-Be-Lovely (the titles of their columns) are discussing the latest letter from a regular reader of the magazine, a woman named Amista. The lovelorn Miss Amista has been unburdening herself (for months) on Miss Friendly-wise, seeking advice on anything from how to keep her hands from tanning and feeling rough to the trials and tribulations of making the man she loves, love her back.

The letters' return address is a house in Wales, and Amista claims to be the ward of a moody, mysterious, darkly handsome man named Carlyon. He is older than her, but what does age matter?. She worships the very ground he walks on.

It's all too, too Jane Eyer-ish.

But when a final letter arrives stating that Amista has won her man - a proposal to which she, practically throws herself at her adored's feet in acceptance - it seems as if a happy ending is in the works and all's well that ends well.
But, not so fast.

Miss Friendly-wise, aka, Katinka Jones goes on holiday in Wales and decides to drop in on Amista and see how she's getting on with her beloved Carlyon. After all the letter writing, Katinka is keen on seeing the happy couple in the flesh. Just to see - you know. She's not really being nosy. Not really. Well, she is a bit curious.

Unfortunately, the house is set on an isolated spot with access only by water. A small boat runs back and forth to deliver mail and/or milk. Usually once or twice a day. Other than that, you're stuck.

The not-so-shocker is this: once Katinka arrives at the village and begins asking for the whereabouts of Amista and her mysterious hubby, she gets some baffling responses.

Everyone knows of Carlyon, the reclusive renter of the only house on the small but mountainous island, but no one seems to know about the wife. No one appears to have heard of the woman known to Katinka, as Amista. Far as anyone knows (or admits) there is no wife up at the house.

But Katinka thinks they must be putting her on or else they've just never met Mrs. Carlyon aka Amista. She decides to go across to the house anyway, on the next milk run. One of the men who's been hanging around the dock decides to go along. His last name is Chucky and later he will tell Katinka that he is a police inspector though she will not believe him. Can you imagine a policeman called Inspector Chucky? She thinks he's a reporter nosing about for some sort of story.

The funny thing is, he thinks Katinka is a reporter nosing about for some sort of story as well. He's an annoyingly friendly type though and when they arrive at the house, he lingers in the background as Katinka ask to see and speak to Mrs. Carlyon.

Where is Amista? later becomes, who is Amista? But I'm getting ahead of myself.

When Katinka meets the darkly brooding but-oh-so appealing Carlyon, it is love at first sight. For him as well, it seems. And when later she learns of the tragedies which have followed Carlyon about, she is disposed to feel sorry for the man. No wonder he broods. He's got a lot on his plate. Not the least of which is a madwoman in the attic.

Well, no, not really. But there is a woman in an upstairs room and she's not Amista. Turns out Carlyon is married but not to who we think. The mysterious woman is suffering from the after-effects of a tragic car accident which has left her totally disfigured and unable to speak. Carlyon was at the wheel - in France - and he blames himself for the wreckage of his wife's physical beauty. That explains the seclusion and the reason why they've come to this out of the way place.

AND it turns out that Chucky is actually there at Carlyon's behest to protect him from Katinka's asupposed nosing about, or so Chucky claims. Odd job for a policeman I'd have thought. Sounds more like a spur of the moment claim to me.

Anyway, from there, things go from bad to worse.

See, here's the thing, the more we get into the story, the less any of it makes any sense. A mystery, to be effective, has to make some sort of sense. Don't you think?

Even in the end when we get an extra dose of histrionics meant as shock and awe, it STILL doesn't make any sense. First, this one is Amista. Then that one. Then, no, it's the other one. And what about that ring? The ring did what? And who is Mrs. Carlyon - really?

How many Mrs. Carlyons are there? And how many revisions of the truth can there be? And why is Chucky so damned annoying? No wonder Katinka longs to kick him out of the house.

Oh, I forgot to tell you that poor Katinka fell down (the countryside is slippery) and twisted her ankle. Yes, yes, she really did.

So of course she has to stay on at the house, resting quietly and comfortably. Even though she's locked in her room and nobody in the house wants her there.

Oh it's all too, too Jane Eyre-ish, just as Miss Let's-Be-Lovely suspected all along. Except that by the time you get to the final denouement, it's not much of one.But you do get to roll your eyes a bit and that's always good excercise. The truth is, I was so exhausted by all the contrived skulking about that I really could not have cared less who did what to whom and who was about to do it again.

I can only recommend the book as a curiosity. On that alone, I'd say, read it and see what you think. Maybe I am totally wrong.

After all, the critics at the time, appear to have loved CAT AND MOUSE.
Posted by Yvette at 11:54 AM