Tuesday's Overlooked (or Forgotten) Film: THE CAT AND THE CANARY (1939) starring Bob Hope and Paulette Goddard. 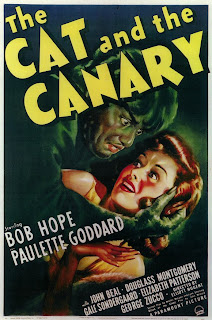 Tuesday is Overlooked (or Forgotten) Films day, a weekly meme hosted by Todd Mason at his blog, SWEET FREEDOM. Check in with Todd to see what other overlooked movies other bloggers are talking about today.Now, here's my entry:

Watched THE CAT AND THE CANARY (1939) for the first time the other night. Yes, strange as it may seem I've never seen this film before. Though I am very familiar with the 'companion' film to this one (at least in people's memories) THE GHOSTBREAKERS, starring Bob Hope and Paulette Goddard in the second of three pictures, they made together.

I wrote about THE GHOSTBREAKERS on the blog sometime ago - it's one of my all time favorite movies - the perfect combo of comedy, mystery, murder and voo-doo. There's even a haunted castle and a zombie. What more could you want?

For years now I've been wondering if I'd ever get a chance to see THE CAT AND THE CANARY which everyone told me was better than THE GHOSTBREAKERS - being that they have similar plots. But for whatever reason, C&C has never been shown on television - at least not when I've been around, plus Netflix doesn't have it and neither does Amazon rentals. So I finally decided enough was enough, and bought the dvd. 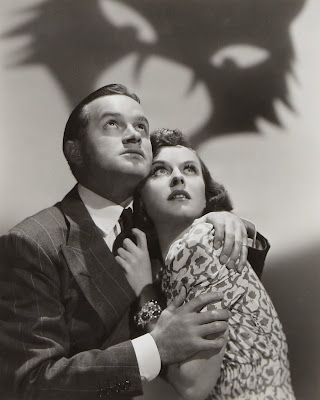 Now after having watched both, I'd say the THE GHOSTBREAKERS is still the better picture but THE CAT AND THE CANARY has the creepy quotient down pat. There were a couple of moments in the film when I was actually frightened.When was the last time anyone was frightened by a Bob Hope movie? Frightened in the regular way, I mean.  C&C is also a lot of fun, maybe not as much fun as I expected, but still quite good enough.

Which, by the way, is based on an earlier silent version (1927) of the film which is based on the play by John Willard. Obviously, this is a pretty popular plot, variations of which have been used again and again in books and films. It never loses its strange allure. 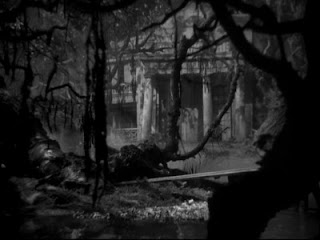 Old man Norman has died in his creepy-crawly, shadowy, mysterious house deep in the Bayou outside New Orleans. The house is only approachable by boat (sound familiar?) though the lawyer (George Zucco) arrives by dug-out canoe, or at least, that's what it looks like. You'd think a motor boat would have been more convenient and/or comfortable. But I digress.

An aside: you really do have to wonder how the house-keeping, cooking, food purchasing and general up-keep of the mansion is handled, since there are no servants and only a housekeeper. I'm sorry but these are the sorts of things that distract me.

Okay, back to the story. Old man Norman was a rich, cantankerous old coot who is already dead and buried ten years by the time the heirs gather at the house for the reading of the will. (I know, it made no sense to me either.) Why the ten year wait? Who knows? Maybe old man Norman wanted to make good and sure that he was truly dead before the will was read. PLOT DEVICE! An old man's whim must be strictly followed. Is it legal? Probably not, but that's the movies for you. (In the earlier movie, they had to wait 20 years which made even less sense.)

So, are we to assume that the housekeeper has been living all alone in the house for ten years? Why?
In hopes of inheriting something? Well, if so, she's in for a bit of a disappointment. 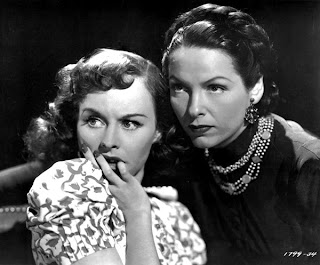 The housekeeper is played by the wonderfully sinister Gale Sondergaard - she of the perpetually snarling lip. Even when there's no mystery, she makes sure there's a mystery. Her very presence makes mystery. That's just the way of it. Oh, and she claims that the strange noises we hear in the house are ghosts telling her when someone will die. Why not? It makes as much sense as anything else that goes on.

Okay, so the heirs (all of them cousins, near and far) show up by means of various boats on this dark and spooky night to find out if they're any richer than they were that morning. 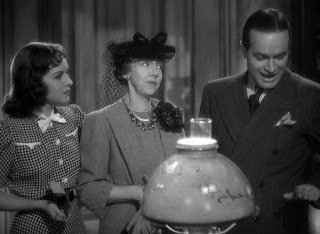 There's Aunt Susan, an elderly woman with snippy delusions of grandeur though it's obvious she's seen better days. She is played perfectly by Elizabeth Patterson, a familiar actress who played this same part in about a hundred movies over the years. Her ditzy companion Cicily (a cousin, I believe)  is played by the wonderful Nydia Westman.

Then there are two men who, for vague reasons, are at odds with each other from the getgo. Something to do with one of them getting and then losing the girl (he cheated on her) and the other wanting the girl for himself. Result: the other behaves like a boorish ass for the entire movie and you wish someone would kick him down the flight of stairs into the dark dungeon of a basement. But I'm getting ahead of myself. 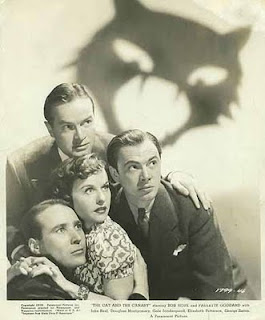 Charles Wilder (Douglass Montgomery) is the unreliable swain who is supposed to be something of a playboy and n'er do well. He has the kind of glossy looks that give me the creeps, but maybe that's just me. The boorish ass is Fred Blythe played in the most annoying way by the perpetually scowling
John Beal.

But wait, there's yet another man who shows up hoping for his share of the loot, Wally Campbell (Bob Hope), who appears never to have met any of the other heirs except...wait for it, wait for it, Joyce Norman (Paulette Goddard) who is the last to arrive.

Yes, Joyce and Wally were childhood pals though they haven't seen each other in years. And yes, she's the 'girl' that Wilder is wild about though they broke up some time back. She's also the 'girl' who makes Fred behave like a truculent fool. 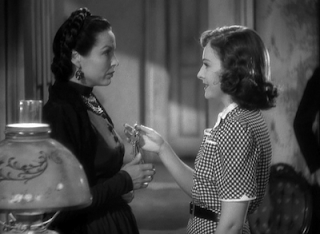 Will you be my housekeeper too, Miss Lu?
Okay, so long story short, once the will is read, it turns out that Joyce is the only heir. But the will has a very strange proviso. If Joyce dies or goes mad within the next 30 days, then a second person becomes the heir which is practically an invitation for that second heir to commit murder.

However, no one except the lawyer is supposed to know who that second heir is. Wanna' bet?

As if things aren't interesting enough, there's a loud knock on the door at midnight and who should it be but a guard (carrying a shotgun) from the local insane asylum (I know, I know, what can you do - it's the way of these things) who tells them that a homicidal maniac has escaped and been spotted near the house. Turns out the man is called 'the cat' because of his claw-like hands and his strange habit of creeping about on all fours like a....well, like a cat - just before he pounces on his victim. (I'm not making this up, I promise.)

The large house, of course, is loaded with secret passageways and panels that swing open when, for instance, one is trying to get some sleep in a dark and gloomy bedroom. Yikes! Before too much time passes there is murder most foul and we realize the escaped lunatic must be hiding out in the house, using the secret passageways to get around. One of reasons we know this is that the large portrait (of old man Norman) in the library has cut-outs for eyes and when Joyce is in the room, the eyes are watching her. Yes, the old hackneyed real eyes behind the fake eyes routine. When I saw it I let out a laugh. It's just such a deliciously fiendish joke. Works every time.

But there are a couple of truly spooky scenes and you can't beat the setting, an isolated old house full of dark comings and goings, not to mention clanging clocks and strange music. Paulette Goddard and Bob Hope work together to solve the mystery like a pair of old relaxed hands who are fond of each other.

Some say that this is Bob Hope's best picture, but I give the nod to THE GHOSTBUSTERS. Still, he's pretty damn good in this and what's more, he's not encumbered by a lot of the annoying silliness which make some of his films almost unwatchable.

Now if only the plot and the denouement made a bit more sense, but maybe that's expecting too much. I'm happy enough with what I got, glad finally to have had the chance to see a movie which had eluded me for so many years.
Posted by Yvette at 11:11 AM

Email ThisBlogThis!Share to TwitterShare to FacebookShare to Pinterest
Labels: Bob Hope, Forgotten Film Tuesday, The Cat and the Canary