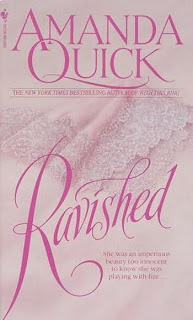 If it's Friday, then it's Forgotten Books Day - the weekly meme hosted by Patti Abbott at her blog, PATTINASE Check in to pick up today's links to other bloggers talking about other forgotten books.

Today I'm talking about romance of the historical kind. Years ago, Amanda Quick aka Jayne Ann Krentz wrote some wonderful romance novels, each with a one word title. I have them all and occasionally indulge in a re-read. Yes, I admit it.

But in truth I stopped reading Quick's books when she went into serial novel mode and moved away from what she'd been doing (heaven knows why) - but I know I'm in the minority because she's still selling up a storm with every new book.

The same holds true for Jayne Ann Krentz's contemporary output, too. I stopped years ago at DEEP WATERS because everything after that just didn't appeal to me. Something changed in her story arcs and even in her characterizations.

Unfortunately, that happens sometimes with prolific long-term writers and the widening readership they're trying to please.

Either I moved on or Krentz did - one of us was no longer in sync with the other. But those early books sure were terrific.


********************************
RAVISHED, set during the Regency era, has elements of Beauty and the Beast, but only just. The story is filled with Quick's usual humor, suspense and romantic entanglements. No one really gets ravished (well, maybe a little), but it's an eye catching title, nonetheless.
Our heroine, Miss Harriet Pomeroy is a single-minded blue-stocking (before the term was coined) intent on keeping an anthropological discovery from being ruined. She dotes on fossils and bones and has basically turned her cottage into Skeleton Central.
In the caves near her home on the English coast, Harriet has discovered a prehistoric skeleton. Harriet's enthusiasm for this discovery has led her to write a letter to Viscount St. Justin, the owner of  Blackthorne Hall and the surrounding lands, which include the caves. She summons St. Justin (a man she's never met) to visit his property (he tends to avoid Blackthorn Hall, the setting of tragic memories) and take care of the thieves which have begun storing their own loot in the caves at low tide. Her prehistoric skeleton is at risk!
Here's the story synopsis from the back cover in all it's romantic heart-fluttery exuberance:
There was no doubt about it. What Miss Harriet Pomeroy needed was a man. Someone powerful and clever who could help her rout the unscrupulous thieves who were using her beloved caves to hide their loot. But when Harried summoned Gideon Westbrook, Viscount St. Justin, to her aid, she could not know that she was summoning the devil himself.
Well, hardly, but that's the way of these back blurb writers - to continue:
Dubbed The Beast of Blackthorne Hall for h s scarred face and lecherous past, Gideon was strong and fierce and notoriously menacing. Yet Harriet could not find it in her heart to fear him. For in his tawny gaze she sensed a savage pain she longed to soothe....and a searing passion she yearned to answer.
Now, caught up in the beast's clutches, Harriet must find a way to win his heart - and evade the deadly trap of a scheming villain who would see them parted for all time.
Phew! Harriet and Gideon have a lot on their plate.
Turns out that Gideon is one of Amanda Quick's best creations. His local reputation (when the housekeeper sees him for the first time, she screeches and faints) is based on deception and lies not of his doing. The Beast of Blackthorne Hall turns out to be one honorable dude.
The scenes between Gideon and his father are especially touching and convincing.
The writing, as usual is top notch. Amanda Quick in her prime was writing these tales in a way that made them very hard to put down. She had a knack for romance and 'what happens next' which very few of her contemporaries could match. She also was a genius at pointed, humorous dialogue in keeping with the tone of the times. While reading these books you can almost hear the clipped British accents whirling about in your head.
Regency folk obviously spent a lot of time bandying wit back and forth. This is my favorite part of all the Quick books. The main reason I'm recommending one today.
To see a complete list of Amanda Quick's books, please use this link.
Posted by Yvette at 10:52 AM