What I Watched Last Night: PLACE OF EXECUTION - Masterpiece Classics - Based on the book by Val McDermid. 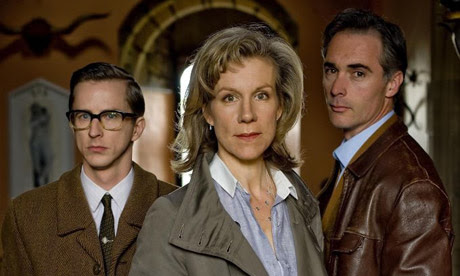 Lee Ingleby, Juliet Stevenson, Greg Wise.
This is brilliant television, this 2008 three episode series (now on Netflix as a two parter) based on a book by an award winning author I'm not really familiar with thought I've heard of Val McDermid, of course.

Lee Ingleby, Tony Maudsley.
Circumstantial evidence leads them to suspect not only that the girl is dead, but that she was killed by someone in her family.

The accused is tried, convicted and hanged, but Alison's body is never found.

Forty five years later, television news reporter Catherine Heathcote (Juliet Stevenson) a harried, divorced mother of a troubled teen, is working on a documentary based on the crime.

Catherine has interviewed George Bennett who, now retired from the police force, had gone on to have a highly respected career in law enforcement. She and her boss feel that a certain spark of something is missing from the current docu-film. But when Catherine next speaks to Bennett, he tells her he has changed him mind and will no longer participate in the film or sign a release.

Afraid the job is blowing up in her face, Catherine rushes off with her daughter in tow, to visit George and try and talk him out of walking away from the project. He agrees to a brief meeting but will not explain what is troubling him.

When later, George suffers a massive heart attack, Catherine decides to see his retired partner Tommy to get an idea of what has gone wrong. There's a nagging something about the case which is bothering her. She wants to get at the full truth of what happened 45 years before.

The acting by all the principles, in fact, the entire cast, is superb. None more so than Lee Ingleby as the young George Bennett, a man consumed by his first big case.

When we meet him years later he is played wonderfully by Phillip Jackson who is known here primarily for his role as Chief Inspector Japp in the Hercule Poirot mysteries.

Casting is key here, because we meet most of the characters years later and great care was taken to have the older actors actually have a lingering resemblance to the younger cast. (My only quibble is that the actress who played Alison Carter as a young girl, just didn't look the thirteen she was supposed to be.)

Lee Ingleby as the intense, driven George Bennett is remarkable. I don't think I've ever seen him before, but I will definitely look for him again. But really, everyone excels in this dark disturbing story of the vilest of crimes. Greg Wise as Philip Hawkin is another stand-out.

I didn't even mind the shifting back and forth from present tense to past, something I'm usually not wild about. It was handled very well and added to the tension and suspense.

There is a stunning surprise ending which, while a bit improbable, still works. There's also a revelation which will catch you completely off-guard.