It's Tuesday again and that means, Overlooked Films, the weekly meme hosted by Todd Mason over at his blog, SWEET FREEDOM. Don't forget to check in later and see what other overlooked or forgotten films, other bloggers are posting about today.

You might know, if you're a regular reader of this blog, that I am a huge fan of WWII spy thrillers so it will probably come as no surprise that I've chosen another one to talk about today.

This fabulous and vastly underrated movie, directed by Harold S. Bucquet, is also known as SABOTAGE AGENT. Though I've always preferred THE ADVENTURES OF TARTU - a much more exciting title.

A difficult film to find - it's not on Netflix, nor is it shown much on TCM, where I first saw it years ago. But through the miracle of the internet, I found it recently in its uncut entirety on youtube. Where else?

THE ADVENTURES OF TARTU is the story of a thrilling wartime mission undertaken by a British officer (Robert Donat in a dazzling, bravura performance), dropped into Czechoslovakia, during WWII. His job? To infiltrate and destroy a poison gas factory, practically on the eve of  the Nazis unloading their deadly weapon on the British.

I'd never seen the uncut version, so watching the bomb defusing beginning with the newsreel shots of London in the Blitz, was new for me. The bomb incident is handled by Captain Terence Stevenson (Robert Donat), he must defuse an undetonated bomb which has landed in a hospital ward. He works calmly and quickly while a ward nurse and a young patient who cannot be moved wait nervously near by.

This incident assures us that Captain Stevenson has nerve, daring and intelligence. So when he's chosen because of his background to take on a deadly mission, all the pieces fall into place. Stevenson is a chemist. Born in Roumania, speaks the language. Studied in Germany, speaks the language. He is quick-witted and resourceful -  the perfect person to tackle an impossible job.

Once in Czechoslovakia, Stevenson becomes  Jan Tartu, a member of the Roumanian Iron Guard, a Nazi sympathizer on the run from the Allies. He is given a room at a small house and put to work at a bomb making plant. Robert Donat's persona as Tartu is wickedly perfect. Donat was always one of my favorite actors and for me, he can do no wrong. But he amazes even me with this performance. 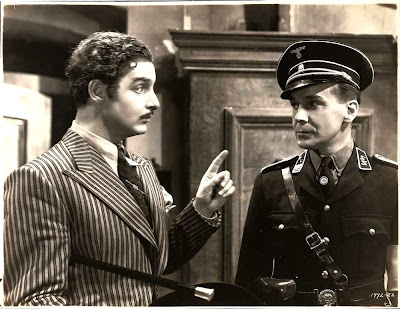 Tartu must insinuate himself into the tense household where a suspicious Nazi officer also has a room. The silent woman who owned the place before the Germans took it over provides the meals, while her daughter (a very young Glynnis Johns) goes daily to work at the bomb factory. There's a fourth boarder, an imperious Czech woman, Maruschuka Lanova (played by Valerie Hobson), who, before the war was landed gentry. She makes no secret of the fact that she is fraternizing with Nazis.

Before too long, Tartu is witness to the cold brutality the Nazis inflict on their workers. But he's forced to look the other way to carry out his mission. He makes a good impression on the plant manager. When its learned he's a chemist, Tartu is transferred to the poison gas factory.


Tartu discovers that the work there is ahead of schedule, the gas is about to be shipped out in a few days. He must quickly improvise a plan to destroy the place. Obviously, he will need the help of the secret underground.

But there is the added danger of a double cross in the works as Tartu has come under suspicion of the very Czech underground whose help he desperately needs. They think Jan Tartu is a double agent in the pay of the Nazis.

I don't want to give the whole thing away, but as you may imagine, THE ADVENTURES OF TARTU has enough tragedy, sacrifice, romance and vile Nazi villainy to make for a great wartime thrilller. Don't you dare miss it.

Robert Donat was an amazing actor who left us much too soon. He was prone to terrible asthma attacks and that curtailed his career. But he left behind many splendid performances: THE 39 STEPS, GOODBYE MR. CHIPS, THE COUNT OF MONTE CRISTO and others.