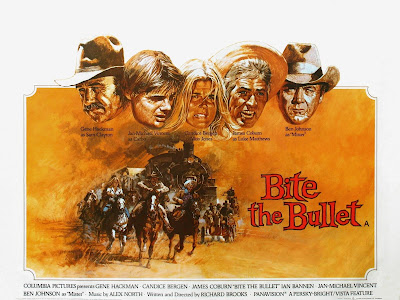 Tuesday is Overlooked (or Forgotten) Film day, a weekly meme hosted by Todd Mason over at his blog, SWEET FREEDOM. Don't forget to check in later and see what other overlooked films other bloggers are posting about today.

I'd seen this great western in a movie theater many years ago and only vaguely remembered how good it was. Watching it again the other night was a real treat. The film reminded me (if I needed another reminder), just how a good cast of actors working well together can make artistry on film.

The premise of BITE THE BULLET - written and directed by Richard Brooks - is simple enough; a bunch of wild west types, cowboys and assorted others, sign up to run a seven hundred mile endurance race sponsored by a newspaper. Each rider brings his own horse. Whoever survives the rugged, savage terrain and comes in first, will win 2,000 dollars - a great deal of money in the early part of the 20th century. 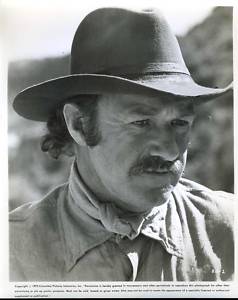 The main contestants are Gene Hackman as Sam Clayton, a hard-edged, mostly silent widower, ex-soldier (Teddy Roosevelt's Rough Riders) with a gentle hand for the horses he loves. He is a man unafraid to show his humanity. 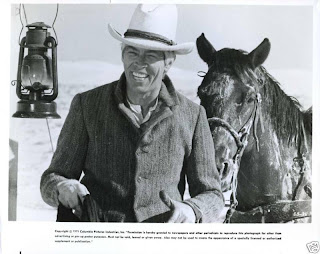 James Coburn as Luke Matthews, Sam's old friend, also an ex-Rough Rider, a gambler and a kind of dandy with a more loquacious attitude. 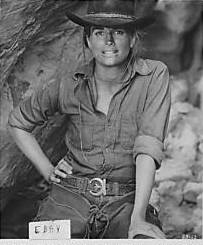 Candace Bergen as Miss Jones, a woman with secrets and her own reasons (which may or may not have anything to do with the 2,000 bucks waiting at the end), for joining in the otherwise very male dominated race.

Ben Johnson as Mister, an old cowboy trying one last time to make a name for himself.

Jan Michael Vincent as Carbo, a young, heedless bully, looking to make a name for himself as well.

Ian Bannon as Sir Harry Norfolk, a good natured Englishman riding in the race for the sport of it.

Mario Arteaga as a poor Mexican with a toothache and enough savvy to, maybe, win the money for his family.

The hard-riding contestants are followed partially along the route by a train load of prostitutes, whiskey and other cowboy essentials. The madam is played warmly by an old western hand, Jean Willes. Also on the train are the race promoters who tally up the day's events.

Richard Brooks shot the film outdoors in New Mexico, Nevada and Colorado. The desert locales add a true kind of grit and a kind of abandoned loneliness to the visuals.. The race is hard on animals and man alike and director Brooks keeps up a driving tempo. A couple of the scenes are not for the faint of heart but, I think, necessary to make a point about the type of person who would enter a race like this and also to aid in character development. Most especially the character of the wannabe gunfighter, Carbo, played by the pugnacious Jan Michael Vincent.

The nobility of horses is never in doubt and director Brooks makes sure we care about these valiant animals who must continue until the race ends or they drop of exhaustion.

Director Brooks uses slow motion camera work in some key scenes in a very innovative way. He handles the characters and their various personalities, strengths and weaknesses in a manner guaranteed to make us care about them. Gene Hackman, especially, is brilliant as the laconic ex-soldier, reluctant at first to join the race. 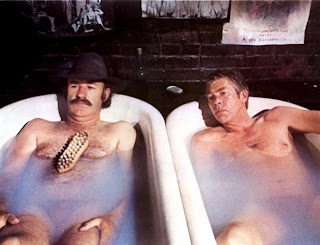 You can just see that both actors are wearing red bikinis under the water.

James Coburn is perfection as Sam's friendly rival - the two men have chemistry together and it works wonders on screen. Ian Bannon too, is terrific. Ben Johnson almost steals the show as an old geezer just looking for respect. His natural style always worked well for him and never more so than in this film.

The only acting weakness in the cast is Candace Bergen as the too perfect looking ex-prostitute (the hardship of that life never shows on her face) who rides and shoots well but looks like she belongs in a Ralph Lauren ad, more than roughing it in the wild west. But even Bergen is passable in this, her best acting job outside THE WIND AND THE LION and Murphy Brown. Far as I'm concerned, anyway.

I wish the editing had been just a little bit tighter and the ending a bit less abrupt, but other than this, I'd say that BITE THE BULLET is pretty much a perfect western.

These are characters who have their own form of honor. They are not hooligans (well, except for the Jan Michael Vincent character and he learns the error of his ways before the race is over) or killers like you'd normally find in westerns of that era. (Or for that matter, this era as well.) The race is an honest one and there is not a single soul out to cheat the other. The winner wants to win fair and square - even the rich dude played by the usually sleazy Dabney Coleman has his rider behave honorably.

There is some shooting and killing, but it's well-deserved and done in response to certain unforeseen circumstances. 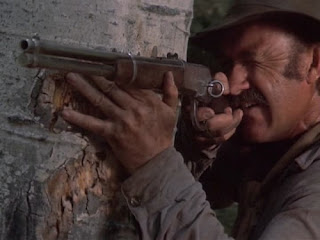 I kept waiting (because I'd forgotten) for someone to poison the water or shoot someone in the back or otherwise try to gain unfair advantage. But Brooks, very wisely, didn't write any of the usual crap into the story. For this alone, the script is a stand-out.

BITE THE BULLET is available for viewing on Netflix and other websites. If you like a compelling, unsentimental, realistic western without the trendy gore and bloodletting, then this is the film for you.
Posted by Yvette at 10:30 AM