Monday Review: THE DOG WHO KNEW TOO MUCH by Spencer Quinn 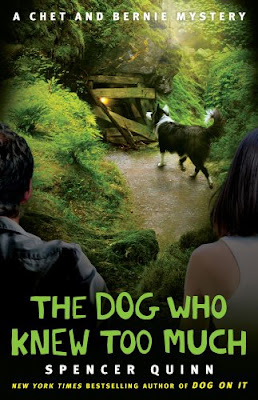 THE DOG WHO KNEW TOO MUCH by Spencer Quinn

The fourth entry in the irresistible Chet and Bernie mysteries set in the American south west.

A wonderfully conceptualized series told from the point of view of Chet, a dog who revels in being just that, a dog. He is not given to cutesy-poo antics or utterances. Author Quinn obviously knows dogs, knows their way of viewing the world (or rather, what we imagine IS their view of the world) and allows his imagination and writing skills to do the rest.

According to Bernie Little, dogs are  'the nation within a nation'. Makes a lot of sense to Chet and to me.  The hapless Bernie and Chet view each other as partners, in their one man/one dog Little Detective Agency.

In this current tale, Bernie - and Chet, since where Bernie goes, Chet goes -  is hired to find Devin, a young boy who's gone missing from a wilderness camp.

The local over-bearing authorities seem strangely reluctant to pull out all the stops to find Devin and Bernie is consequently framed for the murder of a camp guide and dumped in the local jail. Chet is kidnapped - uh, dog-napped - and it's up to Suzie Sanchez, Bernie's reporter girl friend to come to the rescue.

Bernie, seen through the adoring eyes of his dog, is a sympathetic character who reminds me of the old axiom, "I wish I were the man my dog thinks I am."

Bernie is the center of Chet's universe.  Bernie is unique, always the smartest human in the room. His scent is the best in the world - "...apples, bourbon, salt and pepper." His relationship with Chet: perfection. As a reader, I want Chet's view of his 'partner' to be true. I want Chet to be right. I want Bernie to live up to Chet's vision of him.

...The snow sent coldness up into the air. I sniffed at it. Snow went right up my nose! I sneezed. Bernie laughed. I licked at the snow. It turned into water on my tongue, although not much water. Bernie picked some up and patted it - hey! - patted it into the shape of ball. Yes! One thing about Bernie: just when you think he's done with amazing you, he amazes you again. Now, after all this time, I was just finding out he could turn snow into a ball. I knew what was coming next, one of my favorite feelings.

I found the pages where Chet is in peril from some unscrupulous low-lifes the hardest to read. Chet is such a sympathetic character, so endearing in his devotion to Bernie AND his 'in the moment' love of life. His only imperative is to escape and get back to Bernie, no matter what, even if he has no idea where Bernie might be. But Chet's plans are thwarted by the fact that a lot of his memory is short-term. He operates primarily by scent, acute sight and hearing as he tries, dog-like, to figure out what to do.

When Chet is on his own we get some of Spencer Quinn's most intelligent and inventive writing. It's almost as if the author is able to get into a dog's mind and even, his state of being. Chet appears to have his own kind of homing radar as he confidently heads off on his journey back to Bernie guided only by instinct, scent and bits of memory.

There is a hilarious scene when Chet, alone, is allowed into Bernie's next door neighbor's house - owned by an elderly couple who live with a small dog (I suspect a Jack Russell terrier) named Iggy.  We know from earlier books, that Iggy is Chet's pal even if Iggy doesn't get out much any more. (Iggy likes to taunt Chet by brandishing a whole package of bacon while standing at the window.)Pandemonium has never been so funny.

If you're not familiar with this series - now four books old - then for goodness' sake, pick up the first book, DOG ON IT, and get started.

Here's a link to the Chet and Bernie titles.
Posted by Yvette at 2:31 PM

Email ThisBlogThis!Share to TwitterShare to FacebookShare to Pinterest
Labels: Review, Spencer Quinn, The Dog Who Knew Too Much