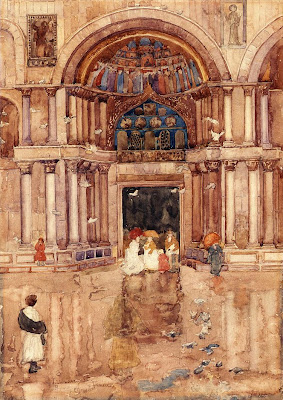 The Porch with the Old Mosaics, St. Marks, Venice 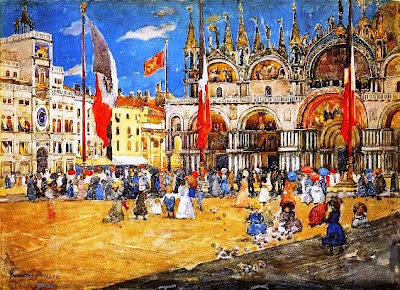 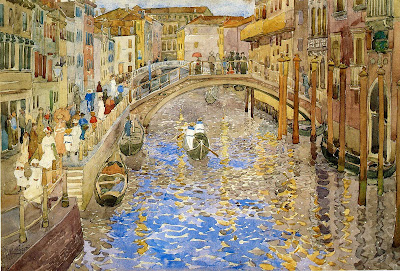 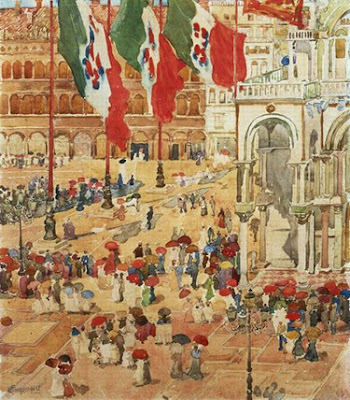 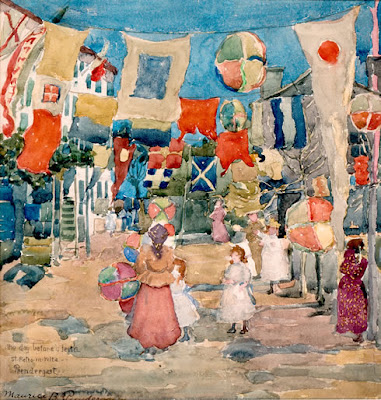 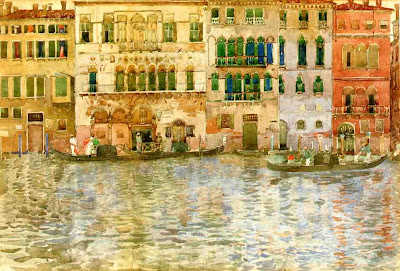 Venetian Palaces on the Grand Canal 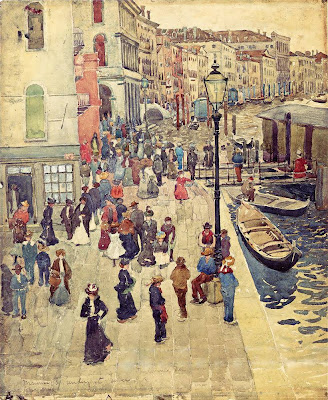 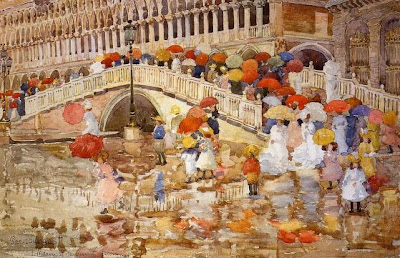 Umbrellas in the Rain 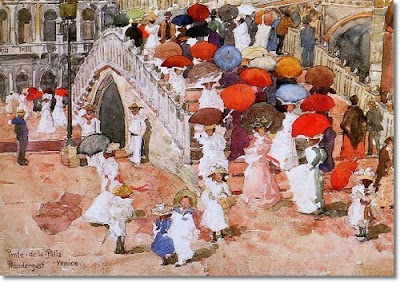 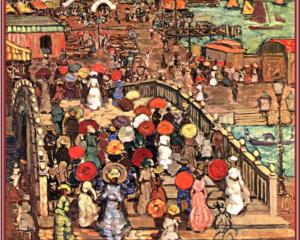 Ponte della Paglia done in a quite different style, probably in oil. 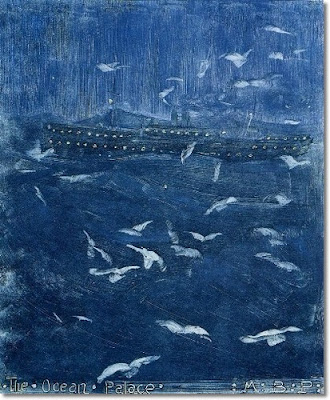 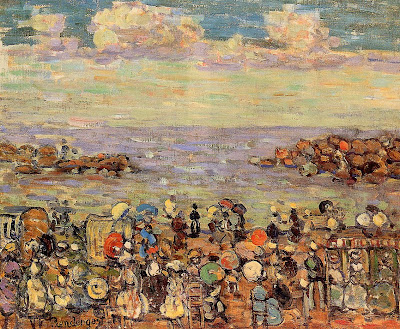 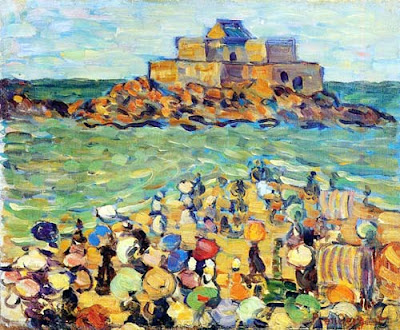 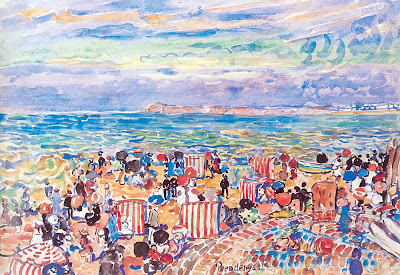 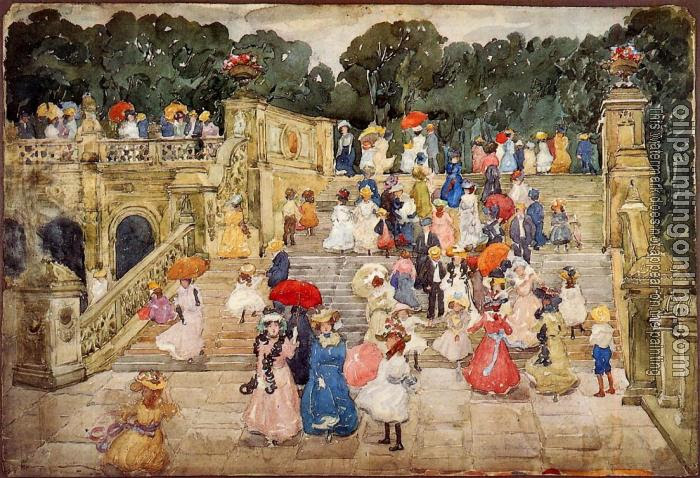 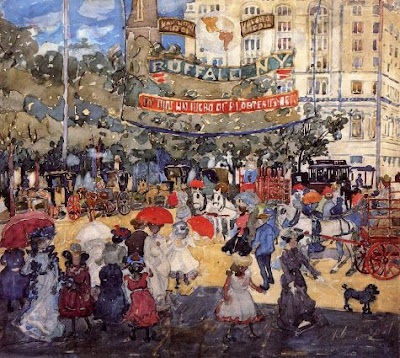 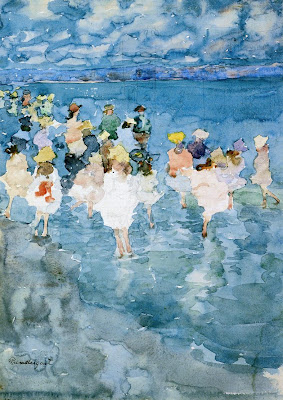 Children at the Beach

Children On A Raft 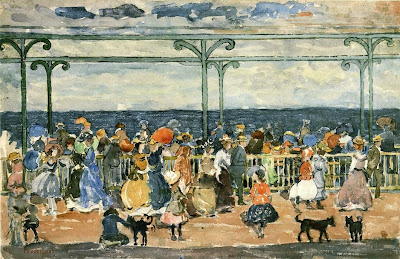 Franklin Park, Boston
Maurice Brazil Prendergast (1856 - 1924) worked in several different styles in watercolor, oils and monotype which is a form of print-making. Some of his work has the Impressionist look though he did not consider himself an Impressionist painter. Post Impressionist was a better fit.
The artist was born in Newfoundland, but his family moved to Boston when he was ten. After high school, Maurice worked as a clerk in a dry goods store while studying drawing at night. Soon he was lettering posters and sketching local sights. He and his brother Charles, traveled to England in 1868, working on a cattle boat.

Upon their return to Boston, the brothers worked to save a thousand dollars for Maurice to go to Paris. In 1891, Maurice made the trip and began studying with Jean Paul Laurens at the Academie Julian. He stayed there three years during which his talent for watercolor was finely developed.

Maurice returned to America in 1891, an accomplished artist. While in Europe, he'd been influenced by Manet, Whistler, Degas, Pierre Bonnard, Edouard Vuillard and Henri de Toulouse-Lautrec as well as Japanese art. When you study his work it's easy enough to see all these influences and more. Though Maurice Prendergast took all he'd learned and seen and developed his own unique way of interpreting the world.

The Clock Tower
He traveled to Venice in 1898 and there he produced some of his more beautiful watercolors. Here's a quote from his biography webpage which I particularly like:

...seven watercolors that were included in the celebrated Armory Show in 1913 revealed Prendergast as a major figure in American painting, probably the greatest of his generation. He was perhaps the first to deliberately abandon a primarily representational approach to art and to let the subject matter be dominated by purely artistic means.

Maurice Prendergast continued to paint and exhibit here and abroad. He and his brother eventually moved to New York City where, despite increasingly poor health, Maurice spent the last ten years of his life working in a studio in Washington Square.

To learn more about the painter Maurice Prendergast and to see much more of his work, please use this link.  Another good bio is available here. 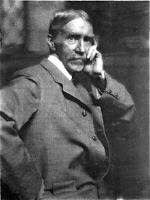